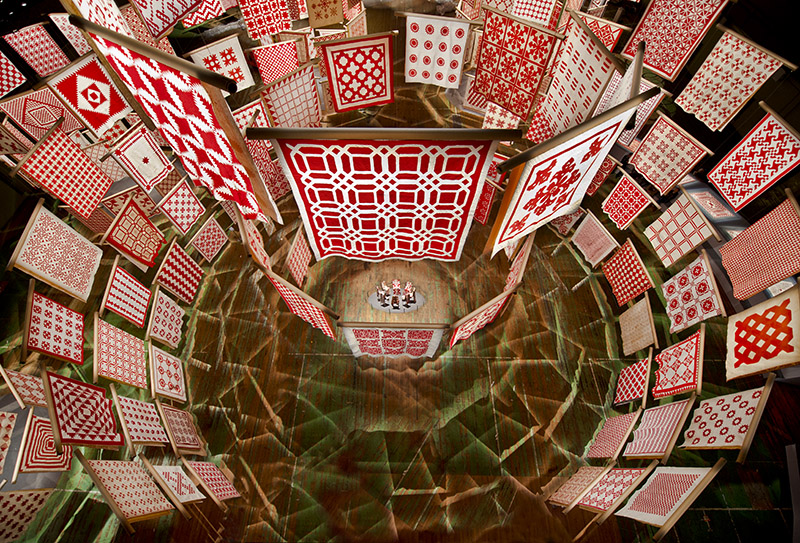 Stacy Hollander recently relinquished her long and laudable curatorial career at the American Folk Art Museum, a constant through the many changes AFAM has seen over the years. We asked her to tell us about some of her most memorable moments and proudest accomplishments. She writes:

I experienced my first adrenaline rush of discovery during the course of my inaugural solo exhibition at the museum, Harry Lieberman: A Journey of Remembrance (1991), about a Jewish Polish émigré who started painting in his eighties, depicting vibrant scenes drawn primarily from Jewish life, lore, and religion. In the days before ancestry.com, I wrote a blind letter to the Polish National Archives on the off chance that his birth record had survived World War II. To my surprise, months later I received an answer—in Polish! Transcendent for me was the moment when the UN translator I’d cajoled into scrutinizing the letter and accompanying documents during his lunch hour, read aloud the handwritten birth record for Lieberman, born Naftuli Liebhaber on October 22, 1880.

Another wonderful moment of discovery occurred while organizing Asa Ames: Occupation Sculpturing (2008).I’ve been obsessed with Ames since graduate school, when I learned about his Phrenological Head in AFAM’s collection, still one of my favorite works of art. He had been the subject of an article in The Magazine ANTIQUES and a dozen or so works were known, several in museum collections, but there had never been an exhibition devoted to him. My research—which continues today—led me to descendants of Ames’s brother John who had some relics that had belonged to Asa. But most amazing, as we were emailing back and forth, was the casual mention of a photograph of Asa, followed a few moments later by a jpeg of one of the most phenomenal mediumistic daguerreotypes I have ever seen. Probably taken between 1849 and 1851, the year Ames died, it shows him on a stool with a block of wood between his knees, holding the tools of his trade. Emerging from the wood is a face that is clearly Ames’s own, and all around are unexplained figures and motifs. My heart still beats fast when I look at this image, and I am eternally grateful to the family for sharing it.

During my tenure at the museum I must have had curatorial oversight of close to two hundred exhibitions, large and small, onsite and offsite, of which forty-five or fifty were my original concepts. I love and completely inhabit each exhibition, so choosing a favorite is difficult. But there are a few that have had a large impact on the field and awakened new perspectives. One was The Seduction of Light: Ammi Phillips | Mark Rothko Compositions in Pink, Green, and Red, exploring the profound resonance between these two American masters. I’ve also had a long interest in posthumous portraits, especially of children, and I’d thought about an exhibition for a long time, but it wasn’t until I suffered significant losses in my own family that I truly internalized the emotional significance of these portraits and the role they played in preserving presence and memory. I believe Securing the Shadow: Posthumous Portraiture in America restored identity to the souls on view, established a lexicon of symbolism that connotes a posthumous portrait, and changed the very perception of folk portraiture in the field. Of course, now every child portrayed by a self-taught artist is thought to have been dead unless proven otherwise!

My last original exhibition for the museum brought wide and deserved recognition to Orra White Hitchcock, whose prescient visual reflections on the natural world in the early nineteenth century feel as fresh and modern as if they were created today. Together with her husband, Edward Hitchcock, she enjoyed a remarkable life of the mind, body, and soul. Her art stands as unequalled testimony to revolutions in the state of knowledge in the early nineteenth century.

There is still a great deal I wish to accomplish, stay tuned!