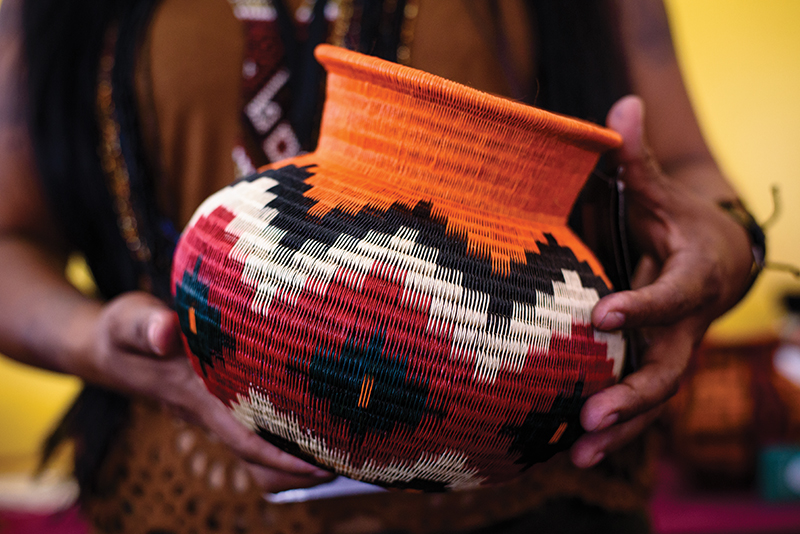 Once we abandoned the benign condescension about folk art several decades ago, it became possible to see the field for what it really is: a perpetual boundary breaker. That is certainly part of the excitement for the twenty thousand or so people who will visit the annual International Folk Art Market in Santa Fe in July, where there will be no trace of the illusory distinction between high and low art, nor of the hoary one between tradition and modernity.

IFAM, now in its sixteenth year, boasts big numbers in addition to its thousands of visitors: more than 150 artists from fifty countries, many of them from the developing world, generate millions of dollars. What began as a utopian plan staffed by four volunteers in 2003 is now a successful event with some two thousand volunteers; surprisingly, its utopian edge has not been blunted.

How did this happen? Stuart Ashman, the CEO of IFAM, has a long and distinguished history in the arts, including seven years as cabinet secretary of the New Mexico Department of Cultural Affairs. He mentions Santa Fe’s traditional hospitality to festivals and markets and, of course, the presence of the Museum of  International Folk Art bordering the plaza where IFAM is held.

That was certainly one part of the attraction for collectors and shoppers. But beyond getting and spending, visitors to IFAM also enjoy discovering the creative spirit common to widely different artists, methods, materials, and cultures. Doing this engages them in another form of boundary breaking as they see beyond national borders in a world increasingly controlled by them.

The pleasure of such discoveries is not confined to visitors. “We hold an artists’ procession,” Ashman tells me, and “it is greatly rewarding to see an Israeli jeweler marching in the parade alongside a Palestinian glassblower.” Then there are the immensely successful Path to Peace baskets made in the rural cooperatives of Rwanda by both Tutsi and Hutu women, survivors of the murderers and murdered of the 1994 genocide. They, too, are here.

Even the process of selecting the artists is somewhat unusual. Two juries are involved. The first, as you would expect, is made up of museum curators and gallerists, experts who can judge, insofar as possible, the relationships of artists to the history and craft of a particular region or tradition. The second involves retailers and designers who can assess the market. Art and commerce are not new bedfellows, but they are rarely joined in such a healthy way: the profits go back to the artists, and IFAM’s Mentor to Market program trains artists interested in acquiring business and marketing skills.

IFAM is big now and like every successful venture it risks ossification. What will keep it from becoming the Burning Man of the folk-art world—slightly stale, oversold, its idealism spent?

Anyone curious about the viability of things made by hand one at a time according to a traditional aesthetic in our evolving world will find a lot to consider in Santa Fe this summer.