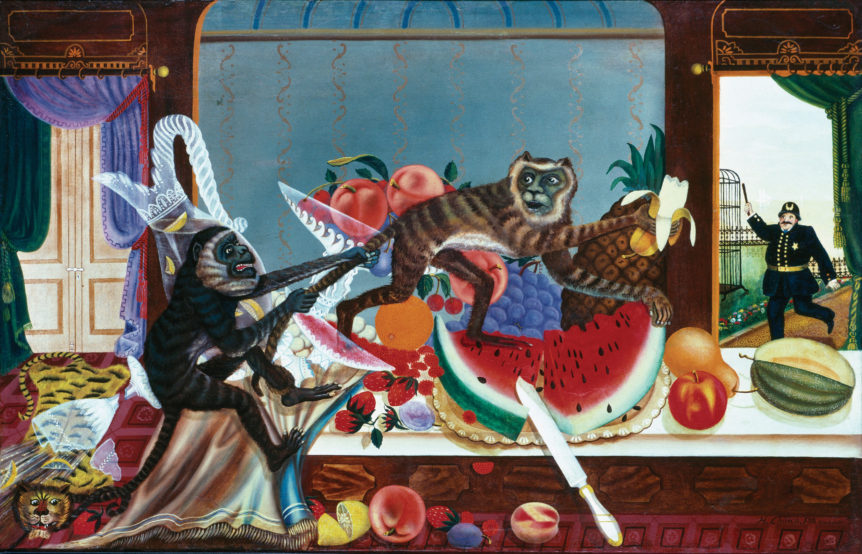 As part of the Abby Aldrich Rockefeller Folk Art Museum’s continuing celebration of the sixtieth anniversary of its founding, a new showcase of some fifty pieces from the museum’s permanent collection has been mounted for a long-term exhibition titled America’s Folk Art.

The selection includes some familiar favorites, such as The Preacher—a late nineteenth-century, carved butternut and pine sculpture of a minister casting his eyes heavenward, based on a German statue of Martin Luther—and The Monkey Picture, a hilarious and surreal depiction of two simian rascals squabbling over a banana (as a policeman hastens to break up the dispute) painted by the Chagrin Falls, Ohio, blacksmith, Henry Church.

But some lesser-known pieces are the real draw, such as a cheval mirror with a frame as intricately carved as the portal to a medieval cathedral, made in the early twentieth century by a Pennsylvania insomniac named David Fox. Visitors to the museum might later find their sleep disturbed by memories of the weird, off-kilter glass eyes of John S. Eiker’s carved, burl walnut tribute to his dog Joe. More soothing, but also strange, is Malcah Zeldis’s 1994 painting Peaceable Kingdom, which depicts a paradise peopled by, among others, Charlie Chaplin, Abraham Lincoln, Alexandr Solzhenitsyn, and Harpo Marx. Louis Armstrong plays trumpet and Ludwig van Beethoven sits in at the piano. Good times.