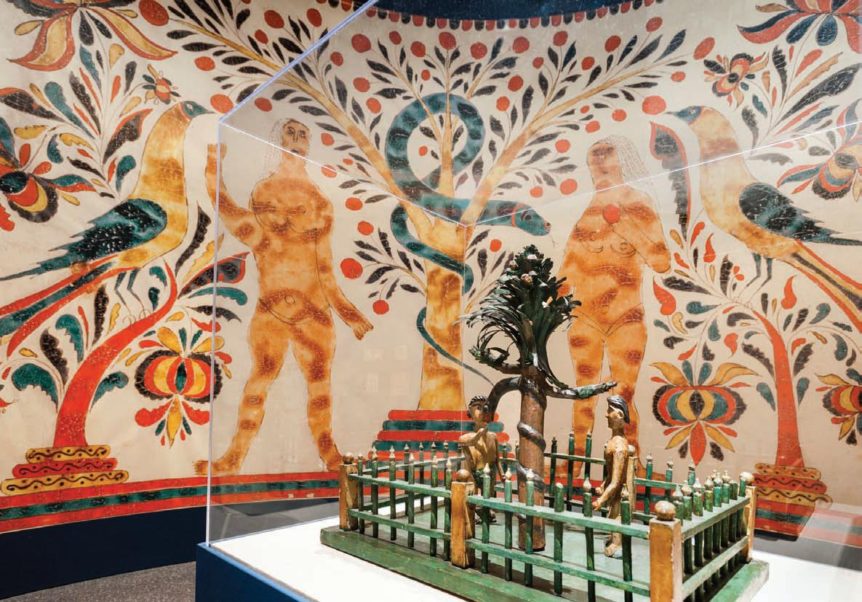 If you are fraktur ignorant, fraktur agnostic, or fraktur allergic, this is an exhibition that should win you over. From its opening moment where a huge curving wall enlarges a small 1834-1835 gem of Adam and Eve attributed to Samuel Gottschall, the visitor is primed for seduction. How cunning of this artist to have depicted Eve being seduced by a snake with a demeanor no more threatening than a Labrador retriever. Consider those imploring eyes and ask yourself, who wouldn’t buy his line? I thought, by contrast, of John Milton’s hissing reptile, “close the serpent sly,/insinuating, wove with Gordian twine/his braided train,” and decided that the poet’s sibilants made Satan’s messenger far too obviously sinister. As the introduction to this exhibition, the enlargement of Gottschall’s Edenic scene strikes a paradoxically joyous note, and that same joyful note is struck again and again in the two hundred-plus fraktur from the Joan and Victor Johnson collection on display at the Philadelphia Museum of Art’s Perelman Building (to April 26), as it is in the museum’s collection of Pennsylvania German decorative arts also on view.

Top: At the exhibition entrance, the vinyl wallcovering is enlarged from Drawing of Adam and Eve attributed to Samuel Gottschall (1808-1898), c. 1834-1845. The original watercolor, also in the exhibition, is a promised gift to the Philadelphia Museum of Art from Joan and Victor Johnson. In the foreground is Adam and Eve by Wilhelm Schimmel (1817-1890), c.1850-1890. That work is part of the museum’s Titus C. Geesy Collection. Above: Birth record for William Allan Hasbrouck by Dennis Stephan, 2013. Iron gall ink, powdered pigments, gum arabic on paper, 15¾ by 18¼ inches. Commissioned by Allan M. Hasbrouck.

As I toured the three galleries I began to admire the ways in which the sunny creations of Pennsylvania German artists stood so resolutely off to the side of the art of their time. With their motifs of hearts, flowers, birds, and beasts illuminating birth and baptismal certificates, house blessings, bookplates, and other documents the schoolmasters and pastors who constituted most of the fraktur artists created a visual world seemingly little touched by sin or pain (though their texts occasionally sing in a darker key). Even a rare fraktur depicting the Crucifixion gives us a smiling, or perhaps smirking, Christ. Of course if you insist that all this unfashionable joy be tempered with a little modernist angst before you will submit to its charms, console yourself by noticing that there is something in Gottschall and in other fraktur artists that prefigures something in Picasso. But I hope you won’t feel the need to do that.

When the Johnsons began seeking out fraktur more than sixty years ago, they were drawn by its graphic punch, eventually becoming discerning and knowledgeable collectors. The fact that the originality of a fraktur’s design is almost always at odds with the conventional pieties expressed in its text would not have bothered them; they did not read German. (Probably a good thing, as I cannot imagine anyone less inclined to conventional piety than Joan Johnson.) The Johnsons’ eye for exceptional art has now been joined to the scholarship of Lisa Minardi in the book that accompanies the exhibition, Drawn with Spirit: Pennsylvania German Fraktur from the Joan and Victor Johnson Collection, which will be a permanent beacon for research in the field and a resource someday for what one hopes will be a good cultural history explaining just what was going on in this community that allowed it to thrive and survive in the way that it did.

At top right in this installation view showing works from the Johnson collection is a birth and baptismal certificate for Judit Sterner attributed to Henrich Weiss (active 1776-1808), c. 1790.

And it continues to thrive in a few surprising ways. Not only are there artists at work making fraktur today (see below on Dennis Stephan) but the form has inspired an ambitious exhibition by seven contemporary artists at the Free Library in Philadelphia (Word & Image to July 18) as well as the work of several others described in the following article by Matthew Singer. What Joan and Victor Johnson have sewn here is bearing fruit in Philadelphia, some strange some not so strange, but all of it evidence of how prescient they were and how fortunate the museum is to have this collection as a promised gift.

Dennis Stephan, a graphic designer, grew up in Lancaster County where he met the dealer and folk art painter Hattie Klapp Brunner in the 1970s. She inspired him to learn about the decorative arts of the area, especially fraktur. Stephan has been making fraktur based on original sources but written in English for several decades now. Although he uses old pieces as a guide, his work is customized for contemporary occasions and he plans on creating his own designs in the near future.