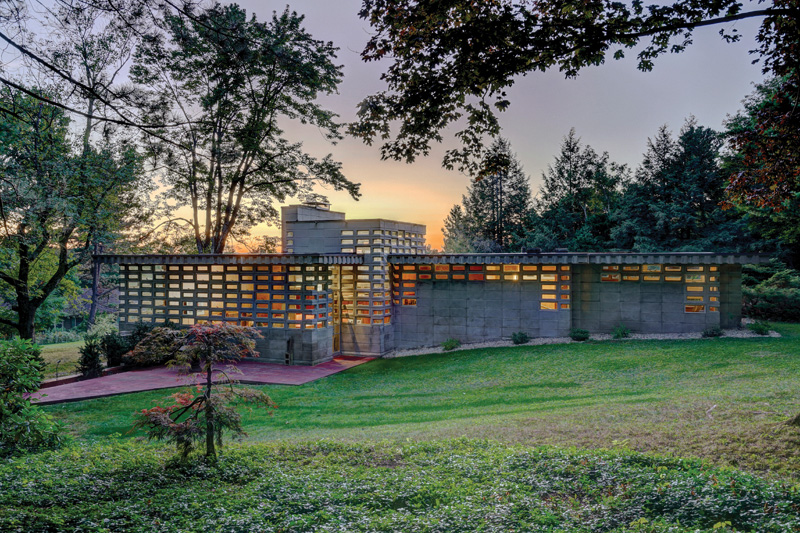 The Usonian Automatic was the last residential building type that Frank Lloyd Wright devised in his more than seventy-year career, and only seven of these small, “affordable” houses were ever built. Dr. Toufic and Mildred Kalil commissioned one of them, inspired by the house Wright had designed for their friends Dr. Isadore J. and Lucille Zimmerman in Manchester, New Hampshire. After the Kalils died, the doctor’s brother John lived in it until his own death in 2018. The house went on the market, and an anonymous donor recently acquired and donated it to the Currier Museum of Art, where it forms a fascinating counterpoint to the Zimmerman House, part of the museum’s collection since 1988.

The Currier published a detailed account of the building of the Kalil House by Michael K. Komanecky in its Bulletin in 1994. There, he quotes Mildred Kalil’s initial request to Wright on July 1, 1954: “We are great admirers of your principles of architecture and would be so grateful if you would create a house for us.” Wright eventually replied, proposing an Automatic, which somewhat surprised the Kalils, who were expecting a design more akin to the Zimmermans’; but they wrote back in March 1955: “We are delighted with our Usonian Automatic and only wish we had time to build it with our own hands!”

Indeed, as Alan Chong, the Currier’s director, tells us: “The Usonian Automatic design, developed by Wright in 1949, rested on the concept that concrete could be cast anywhere, and that the houses could be constructed by the owners with a little help. In fact, this proved to be impossible, as concrete required a lot of care, the designs needed to be altered for specific sites, and so forth. The Kalils worked closely with a Wright assistant, Morton Delson, to incorporate their wishes. A local concrete contractor, Camillo Palermo, cast the concrete blocks using a high-pressure system that produced highly durable blocks.”

Chong reports that the Kalil House remains in remarkably good and original condition, so, after minor repairs, should be ready for tours when the Currier, which closes during the winter months, reopens in April.

Chong goes on: “Both the Kalil and Zimmerman houses are two-bedroom and two-bath in scale, and indeed they stand on the same street. They are, however, very different in character. Warm cypress wood predominates in the Zimmerman House, which has expansive windows and folding doors that give on the garden. In contrast, the Kalil House is constructed from concrete blocks, its largest window is a vast grid composed of small concrete blocks that filter light in a distinctive manner. Our public tours will emphasize the comparisons and contrasts between the houses, allowing the public to directly experience the differences in space, light, and materials for themselves.”

In addition, the two houses offer the opportunity to explore other aspects of our architectural history, from the growth of the suburbs to increasing interest in innovation in the postwar period. Moreover, as Chong observes: “The Zimmermans and Kalils share some interesting similarities: as physicians, they had the resources to commission and build imaginative new residences on the outskirts of an architecturally conservative town. Lucille Zimmerman and Mildred Kalil played dominant roles in selecting Wright as architect and refining the designs to their requirements, suggesting the wider role of women in domestic architecture. And, finally, that Toufic Kalil and Isidore Zimmerman were the children of immigrants opens yet another chapter in the making of the American architectural dream.”