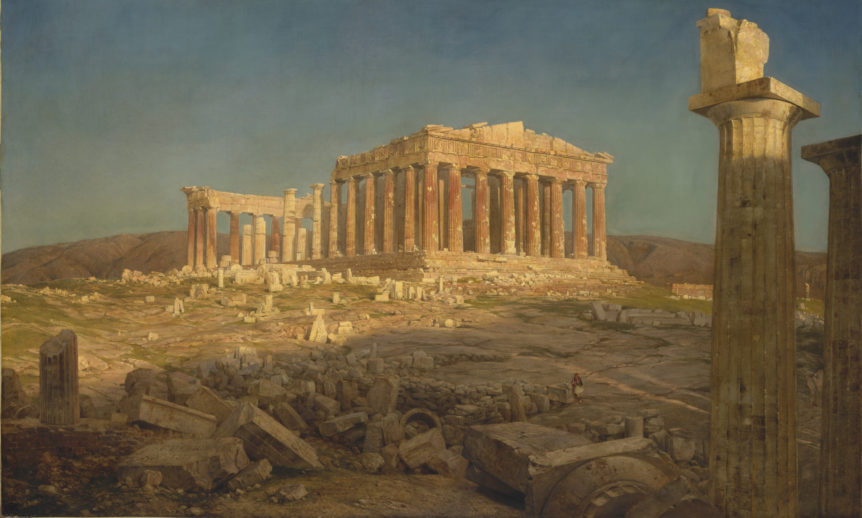 Preeminent member of the Hudson River school Frederic Edwin Church is the subject of a show currently running at Reynolda House Museum of American Art in Winston-Salem, North Carolina, home to one of his most famous works, The Andes of Ecuador. But this exhibition—organized by the Detroit Institute of Arts, where it debuted last year—offers a rarely examined side of the painter’s art. Church: A Painter’s Pilgrimage concentrates not on his familiar paintings of wild North and South American scenery, but on work inspired by his extended voyage to the Mediterranean and the Middle East from 1867 to 1869. 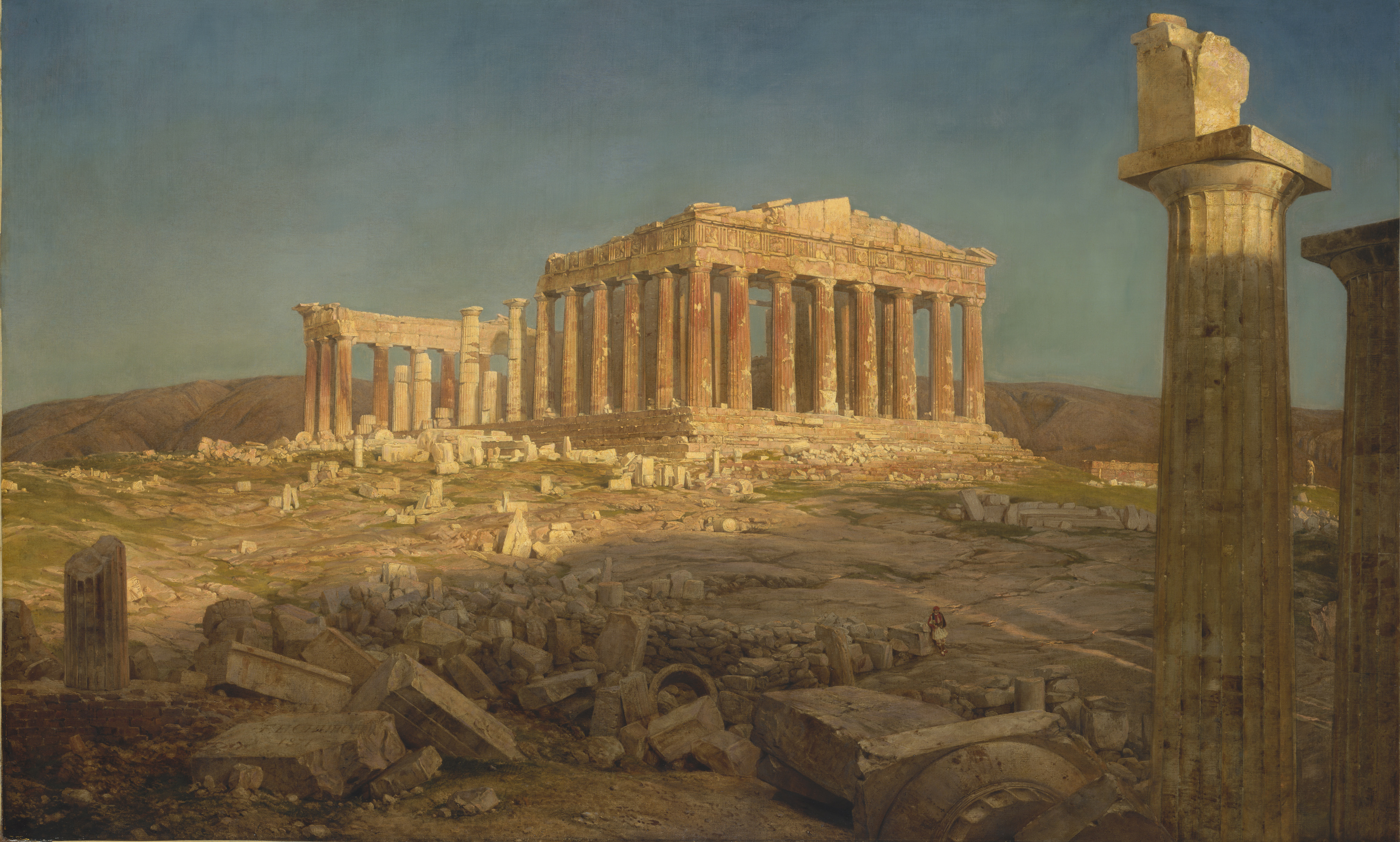 The Parthenon by Frederic Edwin Church, 1871. Metropolitan Museum of Art, bequest of Maria DeWitt Jesup from the collection of her husband, Morris K. Jesup; all images courtesy of the Reynolda House Museum of American Art.

Church was one of the supreme nature painters of his time, imbuing his landscapes with the fleeting qualities of atmosphere and light, while composing the mountains, rivers, morning mists, and flaming sunsets in a dramatic visual rhetoric equivalent to romantic poetry.

However, in middle age, upon traveling through what was then called the “Orient,” Church shifted his sights from natural monuments to the weathered monuments of human endeavor. Rather than abandon the glories of landscape and sky, he deployed them as expressive backdrops to the glories of history.

Through Church’s poetic brush, the architectural ruins of the ancient world become poignant remains of lost civilizations. He depicts the Parthenon (1871) aglow in the sunset. In Syria by the Sea (1873) he bathes carefully delineated Greco-Roman ruins and their craggy surroundings in the hazy light of a cloud-curtained sun. The Urn Tomb, Silk Tomb and Corinthian Tomb, Petra (1868) shows these three relics in a rugged matrix of living rock and crumbled rubble. 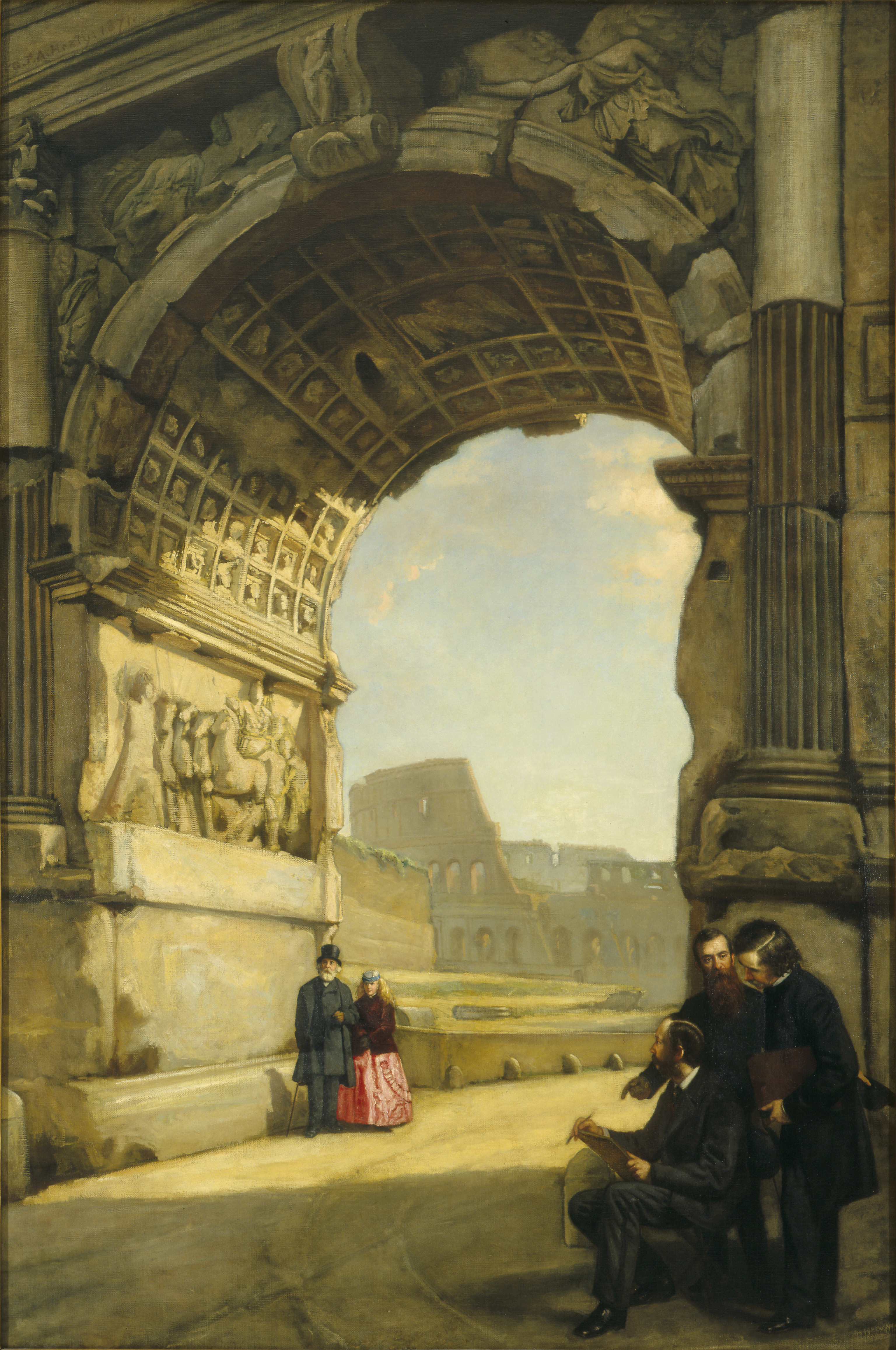 The show’s fifty-two works include invaluable sketches that reveal Church’s working methods. Among these are also several sketches of Olana, his mansion overlooking the Hudson River, now a national shrine. These document the Orientalist ideas that Church brought back from the Mediterranean voyage and that inspired him to transform the initial French Renaissance designs into the high Victorian Persian fantasy that he would continue to embellish and perfect for almost the rest of his life.

This article has been updated to reflect new research on The Arch of Titus, crediting George Peter Alexander Healy and Jervis McEntee.