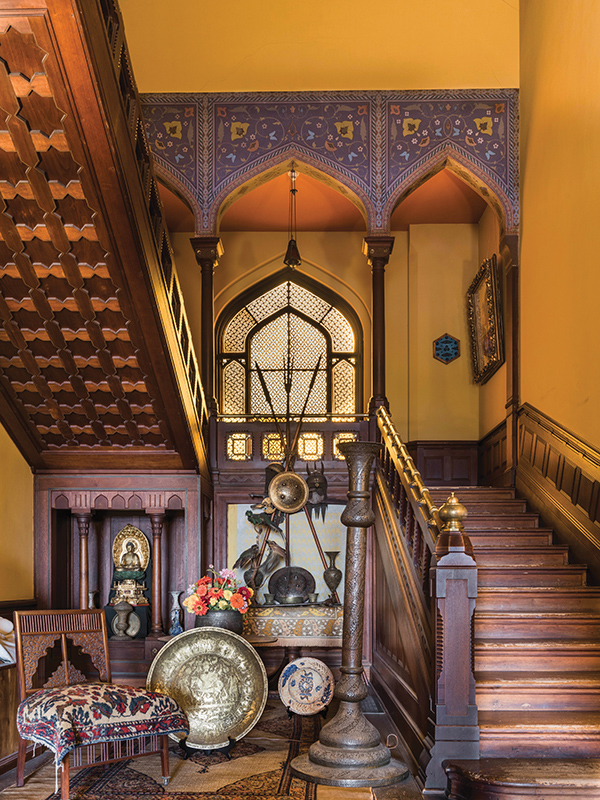 “Almost an hour this side of Albany is the Center of the World,” wrote Frederic Edwin Church (1826– 1900) to his friend sculptor Erastus Dow Palmer. He added: “I own it.” Church, preeminent among the Hudson River school painters, was referring to Olana, his magnificent “Persian” style mansion and the surrounding 250 mountaintop acres of landscape he subtly designed.

Located just south of Hudson, New York, Olana is renowned today as one of the region’s finest and most popular landmarks. Indeed, thanks to the sensitive restoration of the grounds conducted over the past decade and still ongoing, it now ranks as the most completely intact artist-designed environment in the nation.

Olana—its architecture was influenced by Church’s journey to the Middle East and the eastern Mediterranean in 1867 to 1869 (though, ironically, he didn’t actually visit Persia)—was certainly the primary beneficiary of his artistic vision during the second half of his life. And it detracts nothing from his legacy as a painter to suggest that this bucolic estate constitutes one of his greatest works.

Books and guides about Olana have been published ever since an energetic campaign to save it from destruction concluded triumphantly in 1966. But surely this latest publication is the most beautiful. Photographer Larry Lederman spent twelve years capturing the matchless iconography of Church’s late Victorian pleasure dome, and thanks to the book’s large format, Lederman’s masterly achievement weaves together the house, its contents, the grounds, and Church’s art with captivating vivacity and detail.

Olana is seen in all seasons and weather and from every vantage point, including aerial and panoramic views. Lederman captures not only the singular natural beauty that was a constant source of inspiration to Church, but also the harmonious relationships Church achieved between the countryside and the architecture and landscape he designed to complement it, a process that continued long after he and his family moved into the house in 1872.

Lederman’s beautiful exterior shots of the house emphasize the endless felicities of its details: the mansard-roofed bell tower (which Church made “Persian” with pointed arches and intricate arabesque designs in polychrome slate); the varied patterns, colors and textures of stone and brick masonry; the jutting window bays and delicate balconies, the pinnacles, turrets, and rooftop pavilions. A view looking southwest towards the Catskill Mountains provides an exhilarating sense of how this fantastical villa, and its rolling wooded grounds, sits like a gemstone in the Hudson valley landscape.

Lederman captures Olana’s interiors with equal finesse. His beautifully composed studies of the rooms and their preserved furnishings often focus on details that visitors rarely take the time to examine while touring the house—from arrangements of Church’s varied collections of intricately carved furniture, Oriental rugs, brasses and pottery, to the carved and mosaic fireplace surrounds, and the stenciled ornament on interior doors, archways, and spandrels of the celebrated Court Hall.

Writing in 1871 to his friend John Ferguson Weir, Church confessed that “having undertaken to get my architecture from Persia, where I have never been . . . I am obliged to imagine Persian architecture—then embody it on paper.” Therefore inside and out, Olana’s exoticism is as ebullient a blend of scholarship and pure fancy as a Victorian stage set for The Magic Flute.

The book includes large reproductions of nearly fifty of Church’s paintings and sketches, several of them tellingly juxtaposed with photographs reflecting similar ideas realized in the house and grounds—for example Church’s crepuscular landscape Autumn is immediately followed by Lederman’s impressionistic photo of the Olana lake and trees at sunset.

But readers would do this beautiful volume an injustice by not reading the splendid essays on Olana’s various historical and contemporary aspects written by the editors and other specialists. Among them, Julia Rosenbaum explores how every feature of Olana stemmed from Church’s lifelong fascination with the natural world. It is complemented by Eleanor Jones Harvey’s essay concerning the profound influence of the writings of the Prussian naturalist Alexander von Humboldt on Church.

Those who believe that they know all about Olana may be in for some surprises. For those encountering Olana for the first time, this book is the ideal vade mecum.