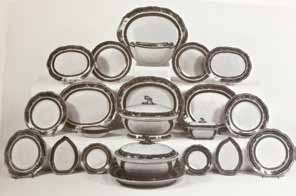 On June 23, 1975, an unusual late eighteenth-century Chinese export porcelain service was sold at auction by Christie, Manson and Woods in London. What was remarkable about this lot, which consisted of 108 pieces, including a covered soup tureen and 51 plates, was that the rather plain porcelain was begging for decoration (see Fig. 1). The objects had a Fitzhugh border, but there was no central embellishment. As David Sanctuary Howard subsequently recognized, someone took the opportunity offered by this lack of decoration and, deceitfully, added to the center of at least some pieces the iconic Order of the Cincinnati insignia held aloft by Fame found on a Chinese export porcelain service owned by George Washington and on another service owned by Washington’s friend Samuel Shaw.1 Though specialists like Howard recognized these pieces as pastiches, and over the years museums have begun to identify them as fakes, not everyone is so fortunate. Indeed, there is a nagging feeling that some of these dishes are still in the marketplace, possibly presenting a problem to unsuspecting collectors who may come across them.

Our careful scrutiny, both visual and using nondestructive X-ray fluorescence spectroscopy, of an authentic eighteenth-century Cincinnati platter and one of the fake plates clarifies the differences between them. Authentic examples are overall better painted. Specific differences in detail include the figures in the shield on the eagle’s breast, which are delicately brushed on the real platter (Figs. 2, 4), but less so on the fake plate (Figs. 3, 5), where, in addition, their heads are simply spots of black enamel rather than being carefully delineated, and the umbrella is likewise simply brushed in black. Other differences include the element connecting the ribbon and the eagle’s head, which is gold on the authentic Washington service and white on the copy; and gold embellishments in the Fitzhugh border on the fake that do not appear on the originals. In addition, there is pitting in the green enamel on the eighteenth-century dish not found on the reproduction. And, lastly, the necessary refiring of the later dish to add the central embellishment left a partial gray surface on the back, not found on the earlier pieces.

These visual disparities were confirmed by nondestructive X-ray fluorescence analysis performed at the Winterthur Museum Scientific Research and Analysis Laboratory in November 2009. The X-ray beam penetrates the overglaze enamel as well as the glazed body. It revealed that the body of both the real and the fake pieces we examined contained similar rubidium concentrations, indicating a like clay source. However, the green enamel on the fake was found to be colored with chromium, while copper was identified on the authentic example. Since chromium-based green enamel formulations were first introduced by the Sèvres Porcelain Manufactory in 1802 and are not known in Chinese porcelains until the early twentieth century, decoration incorporating chromium as a colorant cannot date to the eighteenth century.

Likewise, the analysis revealed the use of a zinc flux in the green enamel and a high cobalt concentration in the black enamel, both equally inconsistent with eighteenth-century Chinese export enamel technology.2

How many of the pieces from the Fitzhugh service sold in 1975 are circulating with the twentieth-century Order of the Cincinnati decoration is unknown. The Peabody Essex Museum in Salem, Massachusetts, and the Reeves Center at Washington and Lee University in Lexington, Virginia, have examples; Angela Howard of Heirloom and Howard Antiques owns a plate that originally belonged to her late husband, David Howard; in 1984 Rare Art in New York sold a spurious piece as a study example to the Maine Antique Digest for seven hundred dollars;3 and examples sold at Christie’s South Kensington in 1996 and 2000 as authentic have since been recognized as fakes and their sales canceled.4

We are grateful to Angela Howard for allowing us to analyze her fake Order of Cincinnati plate. We thank Letitia Roberts of New York for sharing her invaluable knowledge regarding this subject, Karina Corrigan from the Peabody Essex Museum for making their Order of Cincinnati file available, and Jodie Wilkie of Christie’s New York for facilitating access to Christie’s records.