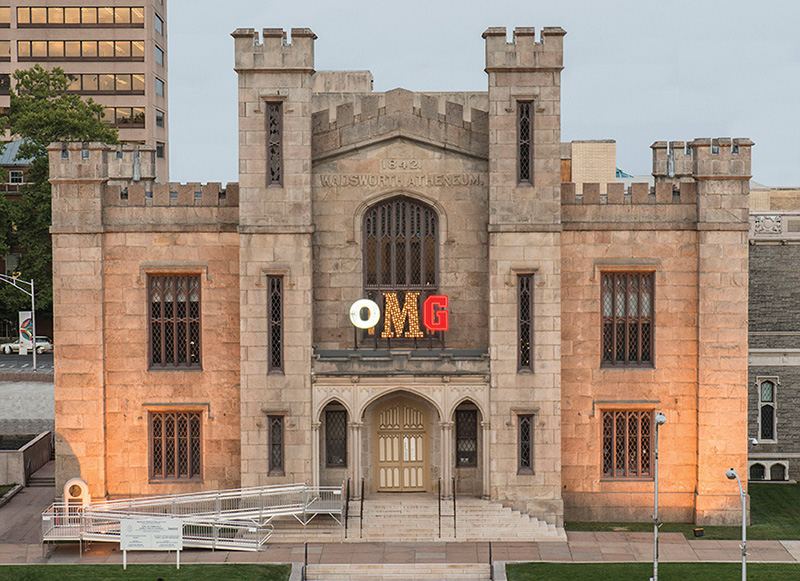 It was quiet in the galleries last September as I took a final walk through the Wadsworth Atheneum before the grand unveiling of our eight-year project to bring back its glories. I wondered how our members, patrons, the press, and the public would respond to all that we have done here. It has been a long haul, full of ups and downs in the economically stressed city of Hartford, Connecticut, as we renovated and upgraded the museum’s aged buildings so that its world-class collections could be reinstalled.

With a day to go before the opening, I was already assured of one achievement. Throughout the five years of cranes poised above our five-building complex, workers hauling materials in and out, painters and plasterers teetering on ladders and climbing up scaffolding, we kept the museum’s doors open and retained our historic position as the oldest continuously operating public art museum in the nation.

Throughout these turbulent years visitors came—braving the construction to see special exhibitions on Caravaggio and his followers, Monet’s water lilies, Rembrandt’s portraits, and my own show of Patti Smith’s photography. Yes, we had to close galleries but we soldiered on, reviving our MATRIX series of contemporary art and artists, staging lectures, and introducing new pro- grams. And then in February of 2015 our blockbuster show, Coney Island: Visions of an American Dreamland celebrated the completion of the first phase of the renovation—the special exhibition and contemporary and postwar galleries that had just opened.

I thought back to the first time I climbed the stairs of the castle Daniel Wadsworth opened in 1844 full of enthusiasm about the new audiences I envisioned bringing through its doors. The folding tables and handmade signs on rickety easels in the lobby and the worn, neglected galleries did not strike me as an auspicious or welcoming environment for what I hoped to do. I’d just been offered the director’s position, but as I was not yet a familiar face I was almost turned away by a disgruntled greeter. I entered the vaulted Beaux Arts Morgan Great Hall, erected a hundred years ago by Hartford-born J. Pierpont Morgan, and encountered its chipped and fading red walls. Of course there was worse to come with setbacks and emergencies over the next few years, including late night calls to alert me that rain, snow, and leaking pipes were endangering the art and that some of it would have to be moved into storage for safekeeping..

As the construction project loomed, I faced another challenge that was equally important to me: Few residents of Harford’s low-income communities ever visited the galleries. Many of them didn’t evenrealize that the imposing castle in their downtown was an art museum meant for everyone. I wanted to find a way to attract those inner city neighbors as well as the young people who commute to and from downtown each day. As a child from a low- income household in New York City my eyes had been opened on school trips to museums and by the free art programs offered to us there. That is what I wanted for the citizens of Hartford.

As we embarked on the vast construction project, our education department helped me create a community engagement initiative that grew to encompass numerous partnerships with the city and suburban public schools as well as with local social service organizations. Visiting artists were paired with students on projects in their neighborhoods. Museum educators developed an art and writing curriculum for neighborhood schools and docents worked with teachers to hone skills in the classroom and then bring the students to the museum. A Hartford Public Schools executive took our project even further, surprising us one Saturday by busing in nearly a thousand inner-city children and their families. That program continues today. One Saturday, a boy turned to me and said, “It must be great to be a museum director.” I had to agree.

It was not all smooth sailing because support for this kind of community engagement was initially mixed. There had been too many false starts by past administrations so our neighbors were skeptical. Even some of our trustees who supported the concept were a bit leery. After all, we were about to launch a major renovation and funds were tight. Fortunately, foundations and corporations came forward to support our community work. They took their lead from the savvy Hartford Foundation for Public Giving, which supplied seed money and continues to help. In the end, the skeptics were won over when they saw what could be accomplished.

Connecticut is known as the land of steady habits and Hartford is a conservative town. Its residents cherish its history but are wary of change. Not all of my ideas went over easily. Then, too, the institution had been destabilized in recent years. Before me, a string of short-term directors, acting directors, interim directors, and, for a time, no director, had stalled its momentum. When I arrived, there was only a scant exhibition schedule and a number of key staff vacancies that had to be filled. It was 2008, not a good year financially, making some staff layoffs inevitable.

Still, I found allies on the board, in the business community, and in government. Governor Dannel P. Malloy came through, supplying the majority of funds needed to complete the $33 million renovation project. We ran a tight ship. With close oversight by the board’s finance committee, I balanced the museum budget every year of the renovation. We kept costs down. And we even built our own power plant to free us from exorbitant yearly fees.

It is now nearly eight years since that first day on the steps of the museum and the end of five years of renovation. I wore my walking shoes on the final walk through because there was much ground to cover on the polished terrazzo floors of the Morgan building as I surveyed its makeover. The Great Hall is pristine; scarred and weathered clerestory windows replaced and ornate decorative moldings brought back to life. New LED lighting bathes the blue walls lined floor to ceiling with paintings. European and American masterworks along with quirkier works brought out from storage hang together, arranged salon style as they would have been in Morgan’s day.

All five buildings are now restored; the “weeping walls” and leaking roofs are history. More than a thousand works are on display in the Morgan building—the last to be finished—in new and dynamic arrangements created by our curator of European art Oliver Tostmann and our curator of European decorative art Linda Roth. Paintings, sculpture, and the decorative arts are now shown in concert to tell stories of the cultures that created them.

I am especially proud of having brought five hundred more artworks into the collection in these past eight years, including gifts of major works by Richard Tuttle, George Segal, and a key bequest of arts and crafts furniture and decorative art by collector Stephen Gray. Purchases of works by Georgia O’Keeffe, Reginald Marsh, Sean Scully, and Kara Walker (among many others) enhanced our holdings of modern and contemporary art while Artemisia Gentileschi’s masterpiece, Self Portrait as a Lute Player—a 2014 purchase—is shown for the first time in our new galleries flanked by her father Orazio’s Judith and Her Maidservant with the Head of Holofernes and Caravaggio’s Saint Francis of Assisi in Ecstasy.

Among our recent acquisitions is one that has created a stir, even among our own ranks— three blinking antique letters mounted over the 1842 castle door on Main Street: OMG. Jack Pierson’s work, commissioned by curator of contemporary art, Patricia Hickson, to enliven a once foreboding entry to the museum, spurred a lively debate. Was it suitable for a historic building?

As I took my walk and prepared to retire from the museum at the end of the year, I wondered about the reception of all of this, including our decision to use interactive technology sparingly so that we continue to honor the primacy of the art. The collection is what brought me to Hartford and the vision of a fitting home for these superlative works is what has driven me through the vast physical and cultural changes at the Wadsworth Atheneum during my tenure.

I am pleased to say that the verdict on the renovation came quickly and decisively. On the eve of our opening the New York Times critic Roberta Smith started her review with, “Hurrah” and the headline called the renovation a “masterpiece.” The Hartford Courant called the transformation “a triumph.” The Wall Street Journal and the Boston Globe followed suit as did many others.

By the end of our opening weekend, almost five thousand people had come through the doors with smiles, wondrous gazes, and even a few tears of relief and gratification. Families of all backgrounds roamed the fifty-four galleries and our drawing boards and activity stations were in full use throughout the day. A seventy-five-piece orchestra from the local Hartt School captured the moment when it filled the Morgan Great Hall with a thunderous performance of Beethoven’s Fifth Symphony.

The Internet lit up with pictures of the opening. One photo featured OMG blinking on the castle facade and the caption, “Hartford’s new skyline.” Of the many congratulatory notes I received, one stood out. The writer quoted Booker T. Washington: “You measure the size of the accomplishment by the obstacles you had to overcome to reach your goals.” As I look forward to what I will do in the future, I can’t help appreciating the incredible opportunity afforded me and our team to overcome every obstacle and transform this storied museum.