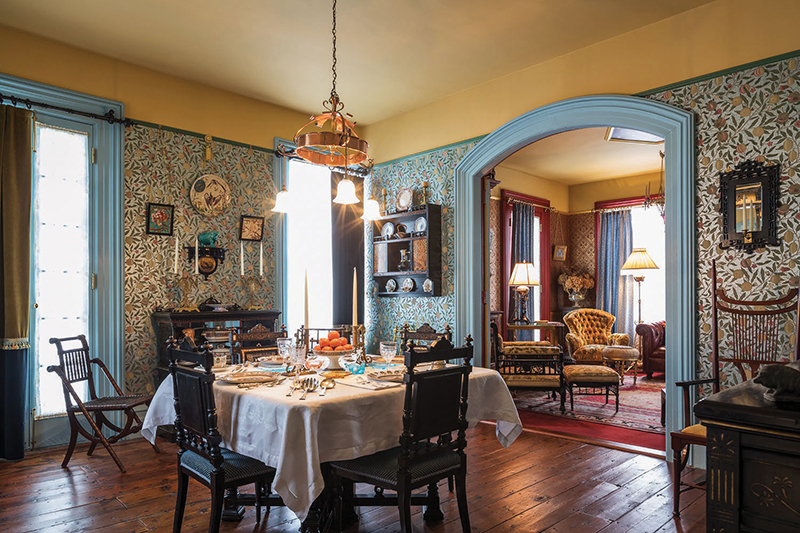 When I was a child growing up in New York we would visit museums and I was enchanted with period rooms. I thought the Venetian bedroom at the Metropolitan Museum of Art was particularly evocative; I daydreamed and thought “I wouldn’t mind living in there!” My career in the decorative arts led me to the Brooklyn Museum over thirty years ago. The amazing suite of period rooms at Brooklyn has occupied me ever since; I have striven over the years to make them more archeologically accurate and admittedly have had to rein in my tendency for excess. When my husband Joseph and I purchased our little “Victorian” getaway in Columbia County along the Hudson River thirty-three years ago, I knew my dream to live in a period room might be realized. I fully intended that the interior would be true to the 1870s date of the house, but knew some self-indulgence in my decorating choices would go unfettered. I almost immediately began to order the reproduction wallpapers, and therefore the themes and color schemes of each room were set early on. The accumulation of all the furniture and objects occupied us for the next three decades. Working within a limited budget, we scoured small antique shops and the obvious flea markets from Farmington, Bouckville, and Brimfield to the Alameda flea market in California. Trips to London always included the great antiques markets, and then excursions to country houses for decorating inspiration. Houses such as Edward Linley Sambourne’s and Frederic Leighton’s, in London, as well as Cragside and Wightwick Manor in the country were revelations.

The 1870s and 1880s has always been the period in the United States that most fascinated me. It was the moment when our country began to take on many of the characteristics, good and not so good, that were to characterize it at home and abroad in the modern period. It was a time of great change due largely to industrialization. As trade and commerce increased, Westerners were exposed to exotic cultures and a mania for Asian things ensued. This new interest in non-Western cultures was a characteristic of the aesthetic movement. It melded with the nascent arts and craft movement begun by William Morris, who lauded the virtue and dignity of the medieval craftsman. Simultaneously the machine, the very means of production, began to influence not only how things were made, but also how they appeared—the machine aesthetic. A preference for simpler design, less artifice, and more awareness of materials led to design reform and the seeds of our modern taste for abstraction were planted. In spite of the dense two-dimensional decoration and sometimes outré color schemes of the period, a strong sense of order and rectilinearity in design began to emerge.

For every successful period room interpretation, the curator has to invent a backstory for those who lived there. In the case of our home—which, when myriad little repair needs emerged soon after its purchase, we christened “Thornside”—the imagined first owners had several experiences that shaped the interior of their newly built house. In 1876, they traveled to Philadelphia to visit the Centennial Exhibition and were exposed to aesthetic movement designs and to the new recently imported from England. And then they made the Grand Tour. In England they discovered Augustus Pugin, William Morris, and high-styled Anglo-Japanesque ceramics. In Italy they were entranced by the classical Roman past, the Florentine Renaissance, and the magic of Venice. All of these influences are manifested in the decoration of Thornside.

Although Joseph and I sanded and painted much woodwork, a small group of inspired local artisans made major contributions: Craig Dick was our master of wallpapering; Greg Blum, our mason, laid the encaustic tiles in the entryway and built the fireplace; upholsterers Larry Marshall and Robert Gumnitz returned nineteenth-century chairs to their original, indulgent glory; Mitchell Motsinger, our gifted sewer, recut old curtains and made others anew; and, furniture designer-maker Peter Superti did everything from re-carving missing finials to rewiring and hanging historical lighting. They all entered into the spirit of the project and became devotees of late nineteenth-century design. In a similar manner, a small coterie of dealers we have known for many decades and are dedicated to the period, offered us fabulous furniture and objects: Michael Whiteway, Paul Reeve, David Petrovsky, Andrew Van Styn, Eric Silver, Helen Hersh, and the late Robert Tuggle.

The decorating of Thornside has been a long and wonderful journey; finally I am living in my own suite of period rooms!