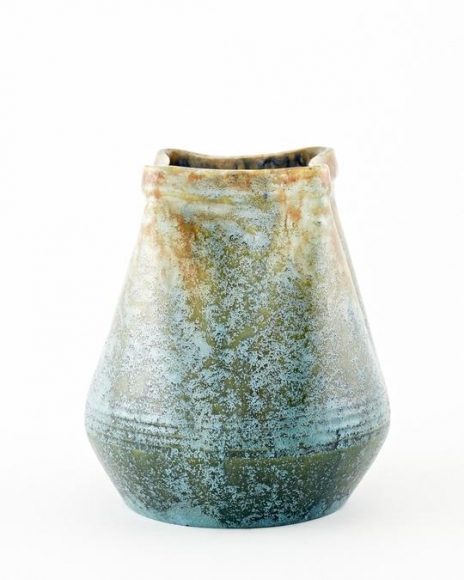 It’s the height of summer, and like the shimmery dragonflies and beetles of the season, fin de siècle-style iridescence seems to be in the air these days. The New York Historical Society unveiled “A New Light on Tiffany,” a luminous re-installation of its famed collection of Tiffany lamps in late April of this year, and in addition to its dreamy exhibition space, designed by Czech architect Eva Jiricna, the long-overlooked story of the “Tiffany Girls” now takes center stage.

Clara Driscoll (1861–1944) was the head of the Women’s Glass Cutting Department at Tiffany Studios, where, in addition to overseeing a team of female artisans, she designed some of the firm’s most admired and collectible Japonisme-style lampshades, including the Dragonfly, Peony, Wisteria. Her very first design was the Daffodil pattern. It had long been assumed that Louis Comfort Tiffany himself was the chief designer of the company’s iconic lamps, so the recent discovery of a trove of Driscoll’s personal correspondence, which documents her design activities in detail, turned the traditional narrative on its head. The 2007 book “A New Light on Tiffany: Clara Driscoll and the Tiffany Girls” by Martin Eidelberg, Nina Gray, and Margaret K. Hofer, through archival material and photographs, offers a fascinating glimpse at Driscoll’s professional world, and that of the 27 women who worked under her direction, cutting individual pieces of colored glass lamp shades, mosaics, and windows. It turns out that Tiffany’s glass studios were an under-the-radar haven for artistically ambitious women, much like the Newcomb, Rookwood, and Paul Revere pottery studios of the same period. The New York Historical Society’s installation features lamps, windows, enamels, mosaics and ceramics, and multimedia kiosks with audio recordings and photographs bring the Tiffany Girls’ stories to life.

A rather more avant garde offering from the turn of the twentieth century is on view across town at Jason Jacques Gallery, where a rarely-seen assortment of prints by Gustav Klimt are paired, at times brilliantly, with Austrian Art Pottery. The exhibition, entitled “Das Werk,” draws its name from an intriguing artistic collaboration between Klimt and Galerie Miethke in Vienna. Under the name “Das Werk Gustav Klimts,” the artist produced and published a series of collotypes—prints made with a photomechanical reproduction process developed in the mid-nineteenth century—of some 50 of his best-known paintings, including “The Kiss,” between 1908 and 1914. Their hope that the collotypes would pique the interest of a select clientele was realized: Emperor Franz Joseph I of Austria was their first customer. The exhibition at Jason Jacques also includes some collotypes based on paintings that were deemed too risqué to be shown in their own time (they were commissioned for the Great Hall at the University of Vienna, which was destroyed during World War II). Klimt’s works are paired with select pieces of Austrian art pottery, primarily from the Amphora workshop, founded by Alfred Stellmacher in the city of Teplitz in 1892. Amphora’s pottery is strongly associated with Jugendstil, the German variant of the Art Nouveau movement whose name translates as “young style.” Lush and languid, many of Amphora’s vessels were decorated with ethereal images of young women dressed in Belle Époque gowns, with locks of flowing hair that twist artfully into the tendrils of flowering plants. The works on view at Jason Jacques are more abstract, and made primarily by the artist Paul Daschel, Stellmacher’s son-in-law, who preferred stylized botanical motifs and luxuriant glazes.

The pairings between the pottery and collotypes are inspired: a Daschel vase entitled “Vertebrae,” which has a ridged surface resembling ribs or a spine, is shown with Klimt’s “Judith 1,” in which the subject wears a bejeweled metal collar that seems to encourage her to stand ever more upright. And an atypically green Klimt piece called “The Sunflower” shows the plant enrobed in leaves as though it were a woman posing in a silk robe; it’s shown with a Daschel vase called “Scorched Blue,” which is glazed in such a way that the green and blue speckles on its surface resemble the variegated texture of the plant matter in Klimt’s collotype.

And though it was made in the latter half of the twentieth century, Rudolf Staffel’s extraordinary porcelain “Window” would probably hold a lot of appeal for both Paul Daschel and the Tiffany Girls. Installed against an illuminated panel, with individually crafted tiles arranged ten across by four high, “Window” glows with a celadon hue, which comes from the artist’s use of copper salts, Staffel (1911–2002) explored porcelain’s unique ability to capture light throughout his long career, during which he was represented by the Helen Drutt Gallery. He was also a key figure in the establishment and growth of the ceramics department at the Tyler School of Art. His “Window” and a selection of his “light catcher” vessels are on view in “At the Center: Masters of American Craft” through July 30th at the Philadelphia Museum of Art. “Window” was originally commissioned by Philadelphia’s Magee Rehabilitation Hospital as part Philadelphia’s Percent for Art program, which mandates that new construction projects devote one percent of their budgets to a new, site-specific work. It was removed in 2007 during a renovation project, and it ended up in storage, where it remained until 2016, when McGee inquired with Helen Drutt English about the work. Having represented Staffel for many years, Drutt English felt strongly that the piece should remain in Philadelphia, and she brought its existence to the attention of the Philadelphia Museum of Art, who supported its conservation. Happily, “Window” is now a promised gift to the museum from the Helen Williams Drutt Family Collection. Its luminous display at the PMA marks its first appearance in over a decade, and though it certainly looks well in photographs, it’s more than worth the trip to see it in person—so hurry!