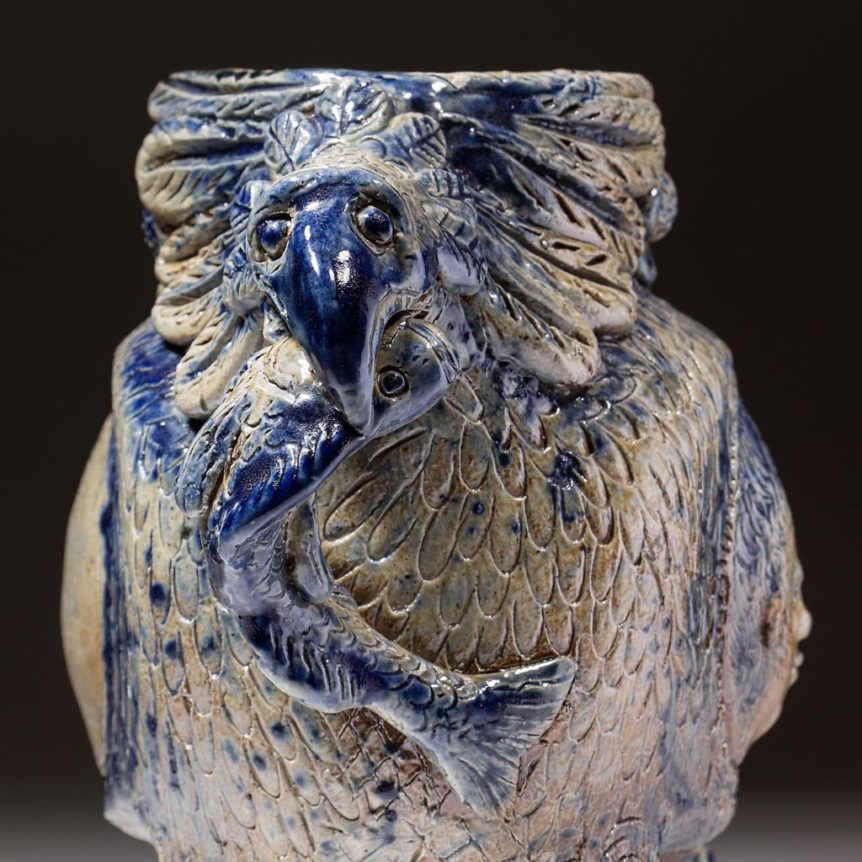 Introducing a new monthly column for aficionados of ceramics and glass.

The new and noteworthy in the worlds of ceramics and glass can come from any part of the globe, and indeed any century. This month’s crop of highlights range from vintage Americana to contemporary art, with the requisite dash of midcentury style in between.

The quirks and fascinating history of Anna Pottery will be on full view when a rare find from the Illinois studio goes up for sale on June 17 at Jeffrey S. Evans & Associates in Mt. Crawford, VA. Anna Pottery isn’t as well-known among collectors as other nineteenth century American ceramics like Rookwood or Grueby, and that may be because unlike the serene and floral ware produced by the famous Arts and Crafts potteries, Anna pottery had an agenda.

The studio was founded by brothers Wallace and Cornwall Kirkpatrick in Anna, Illinois in 1859. The Wallace brothers were advocates of the Temperance movement, and their pottery often bore inscriptions and writhing figures of sinister-looking snakes that warned, with biblical gravitas, of the perils of drinking alcohol. Because the Kirkpatrick brothers were active in the civic life of Anna, Illinois, they often created elaborate presentation and commemorative pieces, such as this striking vase by Cornwall in 1886, which has a mate currently in a private collection.

Though delicate in form, its narrative content is assertive. Eagles at either end hold fish in their beaks, and their powerful talons form the vase’s feet. On one side we find a sweet portrait of a young girl—perhaps Cornwall’s own daughter Amy. The combination is unusual and arresting, tough but tender. Pieces of Anna Pottery are represented in numerous important American collections including those of the Winterthur Museum and Colonial Williamsburg. The company ceased operations in 1894.

(Fig. 2.) An eagle grasps a fish on the side of an 1886 Anna Pottery presentation vase.

Unlike nineteenth century art potters, midcentury ceramists weren’t too keen on representational imagery, but they did love texture, especially the West German producers of the quirky wares known today as Fat Lava. Between 1949 and the reunification of Germany in 1990, Fat Lava vases emerged from a group of over 100 ceramics studios, particularly during the 1950s-70s, particularly the firms of Carstens, Scheurich, Bay Keramik, ES, and Dümler & Breiden.

The term “fat lava” is derived from the pottery’s unusual, volcanic surface. While studio potters and Austrian emigres Gertrud and Otto Natzler were working in Southern California creating unique objects with vibrant, bubbled glazes, West German factories were producing vases and tableware in vivid, psychedelic hues that appealed to the generation that embraced orange shag carpets and macrame.

Some have ultra-minimalist forms, while others appear carved; most are round, but some are boxy and square, with geometric textures to match their shapes. Gallerist Mark Hill’s catalog for the exhibition of the Graham Cooley collection at the King’s Lynn Arts Centre in Britain is a great primer on the subject, and by dint of their aesthetic charm and postwar chic, lovely examples can increasingly be found on the auction block.

An artist whose work feels both ancient and ultra-modern will take center stage soon in Atlanta: the Kenyan-born, British ceramist Magdalene Odundo has a major solo exhibition at the High Museum of Art, on view June 24-October 15. Universal and Sublime: The Vessels of Magdalene Odundo will include terra cotta vessels spanning three decades of her career, along with sketches and works on paper.

Odundo is justifiably a luminary in the clay world, and this exhibition should help garner her much-deserved wider acclaim. Odundo’s work can be found at the Metropolitan Museum of Art, the Los Angeles County Museum of Art, and the British Museum. In 2008, she was appointed an Officer of the Order of the British Empire in the Queen’s Birthday Honour’s List for Services to the Arts.

This exhibition will bring full circle a project that Odundo began several years ago at the High. The show includes drawings from one her sketchbooks from 2011 documenting her studies of the High’s collection of terracotta sculpture from the region of Djenne, dating from the height of medieval empire of Mali. These forms, dating from the thirteenth to fifteenth centuries, have inspired some of Odundo’s own vessels, which share the sculptures’ dynamic sense of movement. Some of her vessels appear traditional and rooted in history, while others seem almost futuristic, as though they were documenting a mysterious scientific phenomenon.

The High will present a conversation between Odundo and Carol Thompson, the museum’s Fred and Rita Richman curator of African Art, on June 23 from 7 to 8 p.m. in the Hill Auditorium.