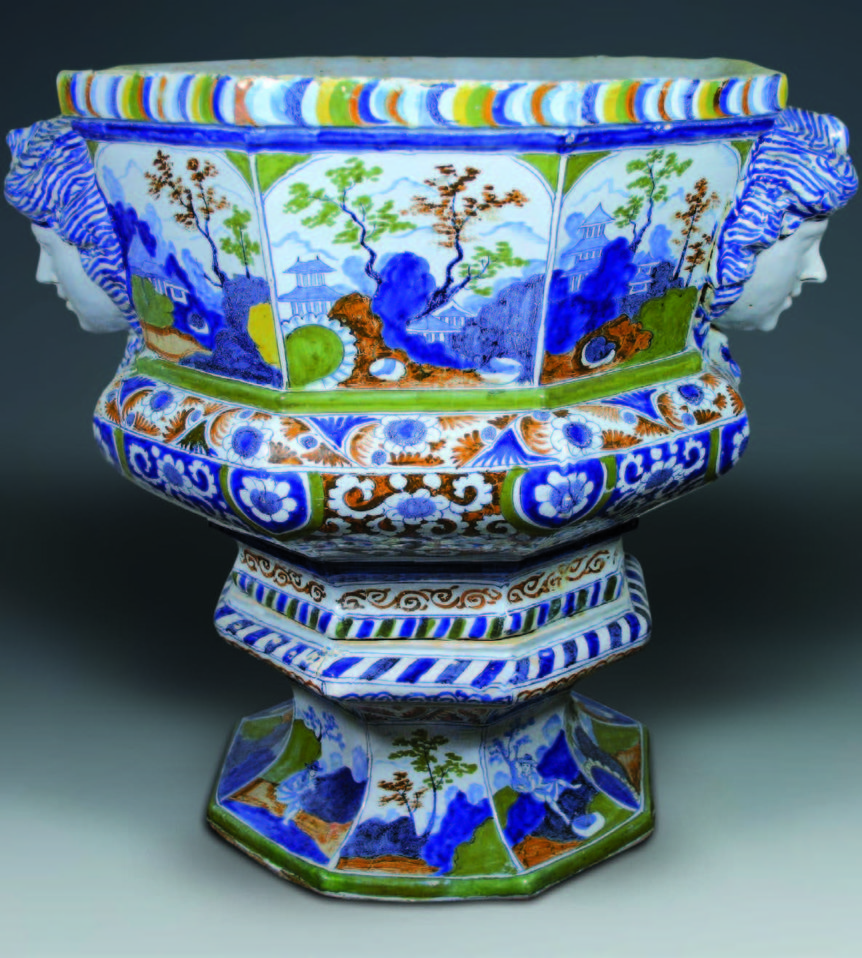 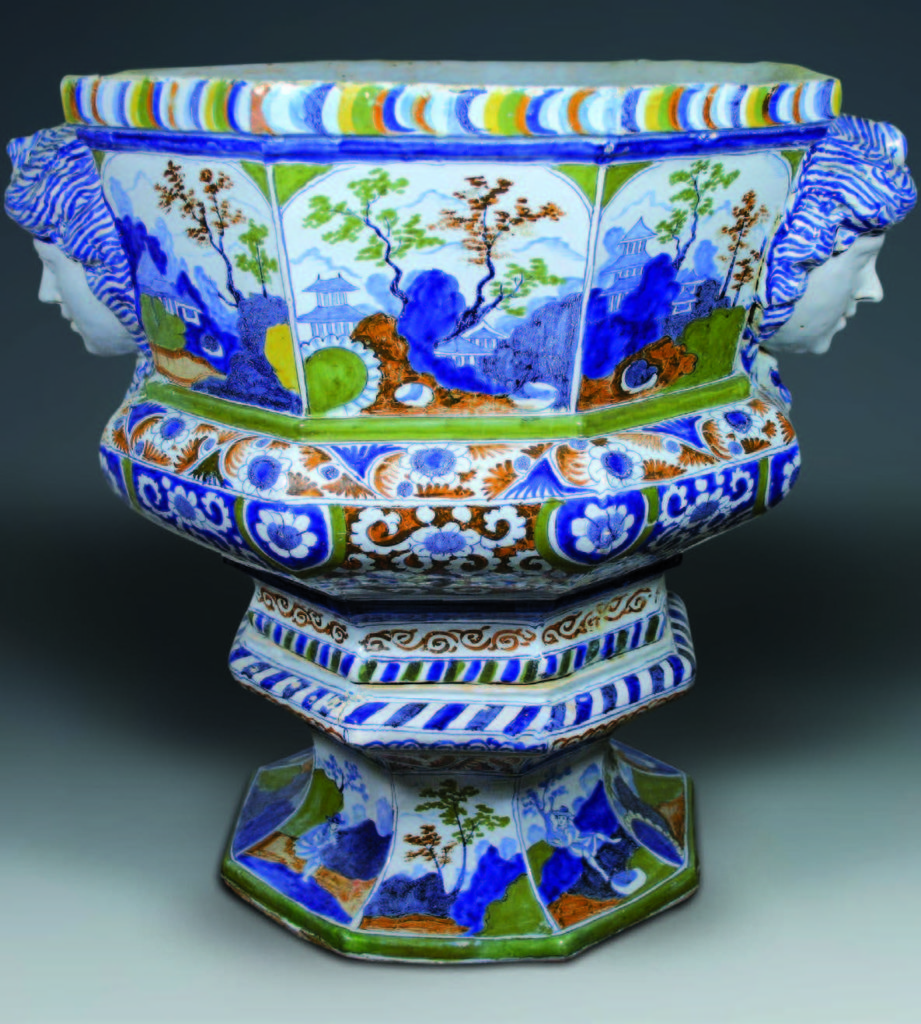 The colorful earthenware known as faience is an especially appealing category of French ceramics. Like Italian Renaissance maiolica and Dutch Delftwares, faience—its name derived from the Italian maiolica-producing center, Faenza—is distinguished by its opaque white tin-oxide glaze, which simultaneously hides and seals the rough, porous clay body while providing a receptive surface for painted enamel decoration.

One of the finest private collections of early faience is that of the American businessman and philanthropist Sidney R. Knafel, and beginning this fall the Frick Collection is exhibiting seventy-five beautiful, often exuberant pieces from his holdings. The rarities on display—some painted with biblical or mythological scenes or floral and figural designs in glowing colors, others with intricate ornamental patterns in blue or red monochrome—have been chosen to relate the history of a technologically complex art form born of Europe’s quest to emulate Asian ceramics before the discovery of the recipe and ingredients for making hard-paste porcelain in early eighteenth-century Germany.

Skilled Italian immigrants in sixteenth-century Lyon brought their legacy of Renaissance maiolica techniques across the Alps to produce the earliest faience. Workshops in Rouen and other French cities took up the art, and, moving beyond the initial influence of Italian maiolica designs, they gradually incorporated motifs adapted from Persian, Chinese, Moorish, or Dutch wares as they developed a distinctively French style. 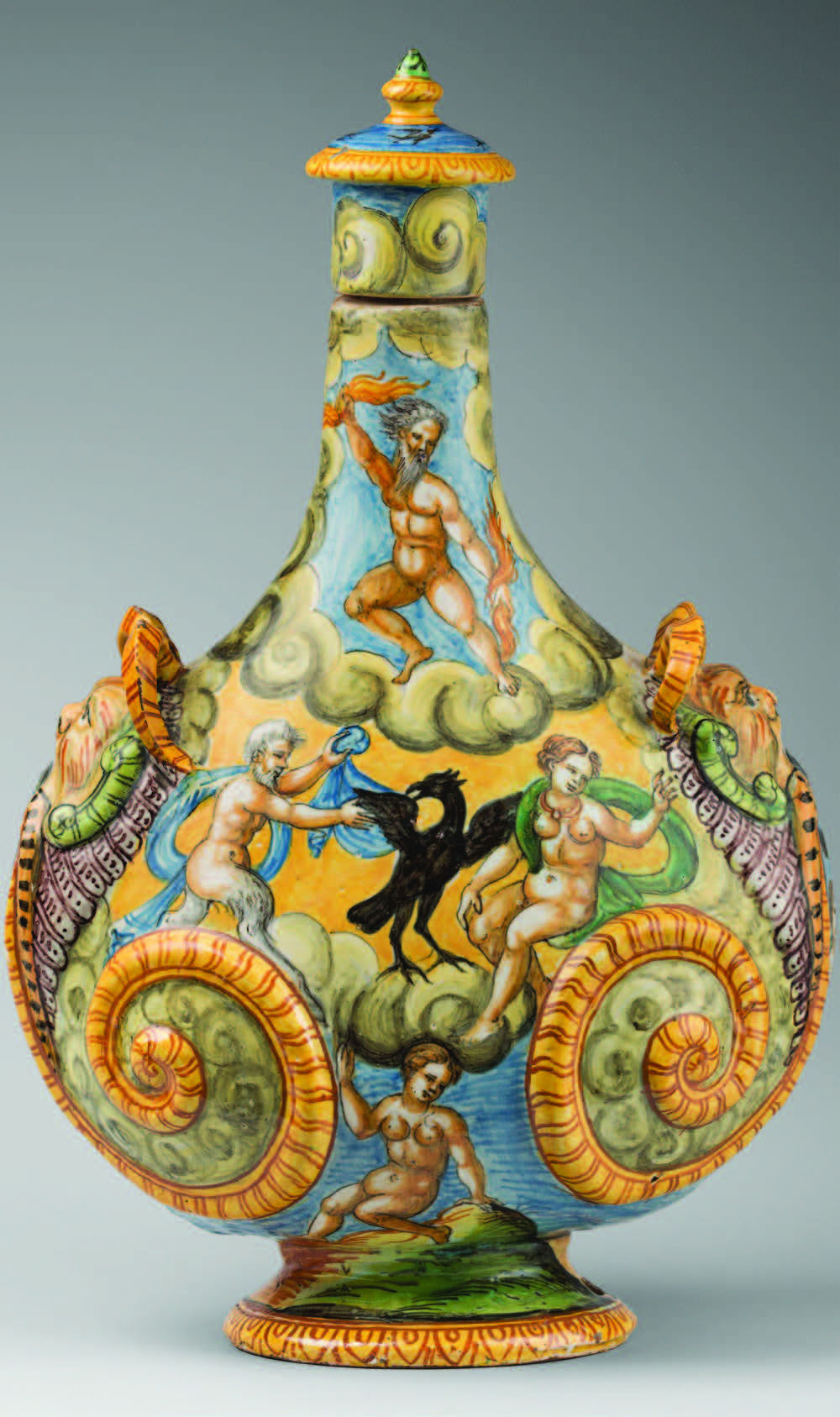 The faience collected by Knafel was produced in the grand feu technique, in which powdered metal-oxide pigments are mixed with water and painted on the tin-glazed surface before being kiln-fired at a temperature of about 1650° F. The palette for this decoration was necessarily limited to the mineral pigments that could withstand firing at such a high temperature: antimony (to produce yellow), cobalt (blue), manganese (purple and brown), iron (red-orange), and copper (green).

The oversize chargers, ewers, bottles and other pieces in the show, their forms often adapted from contemporaneous French silver and ceramics, were not made for use but purely for display—to dazzle visitors in dramatic arrangements on great sideboards in the halls of noble châteaux. Their arrangement in the Frick’s Portico Gallery achieves a similarly dazzling effect today.

Masterpieces of French Faience: Selections from the Sidney R. Knafel Collection is on view at the Frick Collection, New York, October 9 to Fall 2019.