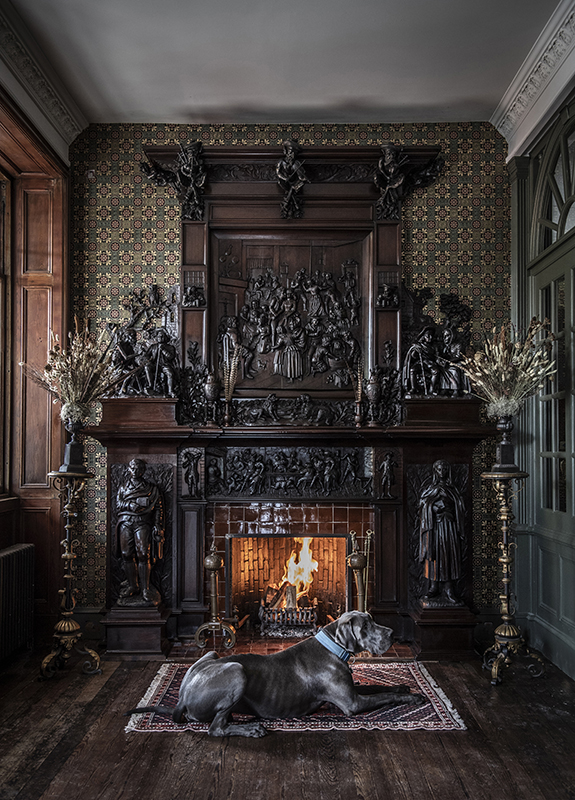 The art world continues to change in incredible ways. When I started as a curator, selling art was a small business, usually involving a single dealer, sometimes a family, a stable of living or dead artists, a single gallery location, and a half-starved assistant. Some galleries had a cushy Old World feel, some oozed bleeding-edge grunge, but the accent was always on art, quality, and discovery.

Now, the top of the art market is a high-finance proposition. The leading galleries today have branches all over the world, and the largest are conglomerates. They have publicists, like movie stars. Smaller, traditional dealers still exist, championing their artists and often the best new ideas, but they’re squeezed between the giants and the online market. I’m not sure art lovers and connoisseurs are well served by the race after glitz and big bucks.

That said, there’s recently been an intriguing twist in the big, corporate art world. It’s represented by the Fife Arms—an elegant hotel that opened last year in the valley of the River Dee in Aberdeenshire, Scotland. An expertly renovated Victorian-era coaching inn, it is owned by the international art dealers Iwan and Manuela Wirth, principals in the firm Hauser and Wirth. The Fife Arms is a quintessential old architectural pile. Designed by Alexander Marshall Mackenzie in the late 1890s, the hotel is located near Balmoral Castle, Queen Elizabeth’s summer retreat, and was once patronized by the Duke of Fife. It is now a category B listed Scottish historical landmark. It’s in a gorgeous setting in Cairngorms National Park, a kind of Scots wonderland that encompasses Highlands terrain, castles, gardens, and even whiskey distilleries.

And now that setting includes the new Fife Arms—a serious art space for people with seriously good art taste. Hauser and Wirth was established in Zurich in 1992 and specializes in modern and contemporary work by high-profile artists such as Lorna Simpson, Roni Horn, Mark Bradford, and Lygia Pape. Yes, it’s big, with offices—I still call them “shops”—in London, Hong Kong, New York, and Gstaad. They sell art and are very business-like about it, but the Wirths and their partners, Ursula Hauser and Marc Payot, have always had a strong and distinctive interest in connoisseurship and scholarship.

Their work feels a little like that of a foundation, or a small college. Hauser and Wirth has a distinguished fellowship program for art historians. The gallery has a new and very good art journal called Ursula that’s given a jolt to the spotty world of art journalism. Its artists are uniformly good—I’ve used the work of many of them in my shows—and I’ve seen quite a few shows there that belonged in museums. The place is also serious about architectural preservation. In their choices of branch sites, the Wirths, Hauser, and Payot have always attended to the integrity of the buildings that house their galleries, restoring them beautifully. The firm promotes scholarship but, more essentially, strives to wed art with life. The Fife Arms is a unique expression of this approach.

“We have a home nearby and the Dee valley is our happy place. The Fife Arms was crying out for help. We saw how much opportunity it offered, to return it to its former glory and make it the heart of the community once again,” says Iwan Wirth. “Art is at the heart of everything we do, so it was only natural that contemporary art would play a big role in the hotel. The artists were among the first people that we showed around the hotel before they were invited to create site-specific works.”

The Fife Arms has, by management’s count, some fourteen thousand antiques and works of art on view in its public rooms and forty-six bedrooms, including commissioned pieces. The Flying Stag, the hotel’s pub, was conceived by artist and naturalist James Prosek. The eponymous mythical creature he created, mounted above the bar, is a hybrid with the wings of a ptarmigan and the body of a stag—both native to the region. There’s a Steinway piano reimagined by Mark Bradford. Los Angeles artist Richard Jackson designed an impressive chandelier composed of glass antlers and replicas of bagpipe drones.

The cubist-inspired mural by Argentine artist Guillermo Kuitka that covers the walls of the dining room is a stunning response to the stream known as the Clunie Water, which rushes past the hotel’s grounds. The dazzling ceiling of the drawing room is a watercolor by the Chinese artist Zhang Enli, who was inspired by the concentric banding in cross-sections of Scottish agates.

Many of the artists whose work is on view are Scottish, which is a very good thing that makes sense, too. Scottish art and design have always been voracious in drawing inspiration from whatever proves aesthetically engaging and novel. The Scots are an ingenious and creative people, and the Fife Arms has captured their spirit. The place is also great for the Scottish economy—local craftspeople were employed for the restoration when possible, says Wirth—which is one reason why Prince Charles helped christen it last year.

“We fell in love with Scotland because of its people, the nature and its raw natural beauty—in particular in the Cairngorms National Park,” Wirth says. “As Swiss, we felt drawn to the vast landscape that reminded us of the Alpine hills. Everyone has a romantic relationship with Scotland, and we weren’t any different.”

Brian Allen is an art historian and curator specializing in American art.