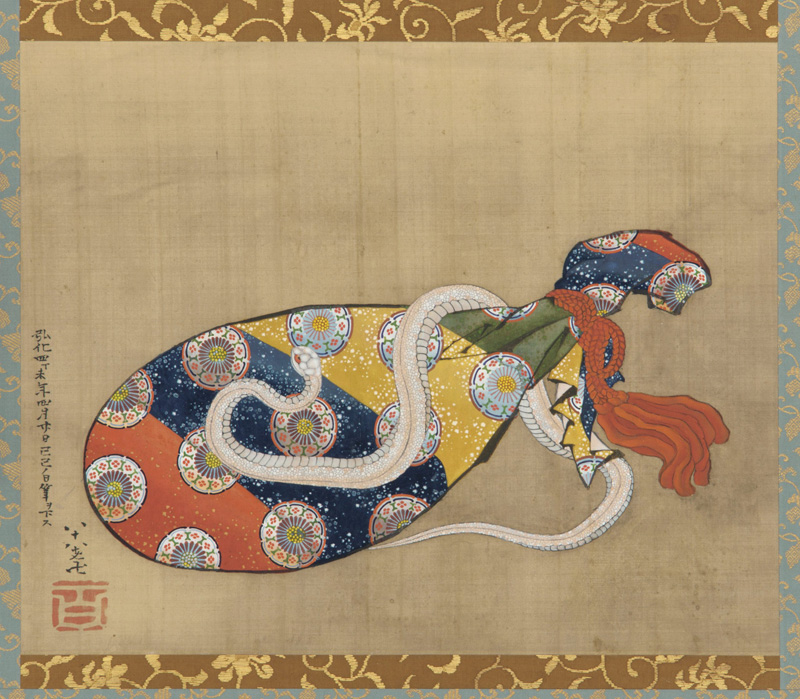 Although best known for his woodblock prints, the Japanese artist Katsushika Hokusai was never satisfied with that medium, in which another hand, the block cutter’s, was expected to finish the work he himself had begun. That the result was inferior to the artist’s paintings and drawings is an opinion that industrialist and collector Charles Lang Freer seems to have shared. His 1906 bequest of 203 works by Hokusai to the Smithsonian Institution included not a single print. Objects from that bequest make up the bulk of the works on view at the Freer Gallery of Art in Hokusai: Mad about Painting, a yearlong exhibition to commemorate the centennial of Freer’s death.

The show should serve to correct the popular conception of Hokusai as, first and foremost, a printmaker. While some of his block-ready drawings—not to mention the prints themselves—foreground a sort of primitivism loved by the impressionists, one in which lines serve as little more than borders between flat fields of color, Hokusai’s mastery of traditional Japanese brushwork receives full expression in his sketches and paintings. In such bagatelles as Sketch of a Courtesan from the mid-1800s, a simple vocabulary of swelling and diminishing lines, vigorously laid down, serves to convey form, weight, depth, and even movement.

Hokusai made a splash in the early 1800s when he applied the Western pictorial techniques of chiaroscuro and perspective to his paintings, a revolutionary innovation in the context of Japanese art. As the fine motor skills required to make block-ready drawings began to leave his fingers in the 1830s and ‘40s, he expressed himself in paintings with increasing frequency. Of the late paintings in the present exhibition, several charming examples depict animals—a subject more closely associated with his contemporary Mori Sosen—as well as mythical creatures like dragons whose sinuous bodies, painted in the formal (shin) style, emerge from sfumato clouds rendered in cursive (sō).

Freer’s desire was that Hokusai be considered an artist on par with the modernists whom he so richly influenced. He offered his collection to the Smithsonian on several occasions before it was finally accepted after Japan’s victory in the Russo-Japanese War—the first victory of an Eastern power over a Western one—“made a gigantic wave,” as the exhibition’s curator, Frank Feltens, puts it. Little Japan, it appeared at the time, was worth a second look, and the painter best known for The Great Wave is, too.