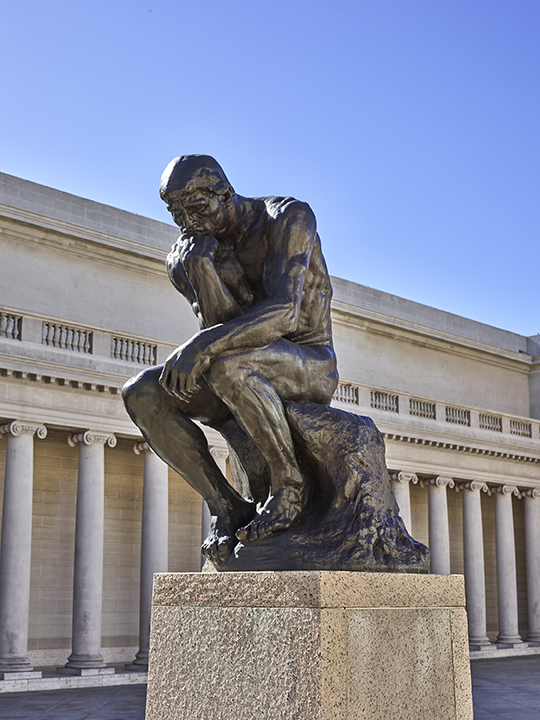 The Thinker by Auguste Rodin, c. 1880, cast c. 1904, in the Court of Honor of the Legion of Honor in San Francisco. Fine Arts Museums of San Francisco, gift of Alma de Bretteville Spreckels.

The name Alma de Bretteville Spreckels may not register with many of today’s Bay Area tech millionaires, but they owe her a debt of gratitude for making the fine arts part of the civic character of San Francisco. An ambitious Gilded Age working-­class girl, she parlayed a career as a fashionable artists’ model into marriage to the sugar tycoon Adolph Spreckels in 1908. With his millions, Big Alma (as the six-­foot-­tall socialite was called) made the city’s cultural aspirations part of her personal project for self-­aggrandizement.

Spreckels’s greatest gift to the burgeoning metropolis was a museum: the California Palace of the Legion of Honor, which opened in 1924. Within that neoclassical jewel box—a three­-quarter-­size copy of the Palais de la Légion d’Honneur in Paris—the brightest gem is the collection Spreckels assembled of work by sculptor Auguste Rodin (1840–1917), considered one of the finest in the world. A bronze casting of about 1904 of The Thinker that sits in its central courtyard has become the museum’s emblem.

This year, to mark the centenary of Rodin’s death, the Legion of Honor will present approximately fifty of the nearly one hundred Rodin artworks it owns in new gallery installations that will, says the curator, Martin Chapman, “look at the whole of Rodin’s career and the major themes of his life and art.” Marble busts and plaster models will be on display, but pride of place belongs to the full­-size bronzes purchased from the Rodin studio—among them The Kiss, St. John the Baptist Preaching, and The Age of Bronze. Big Alma would be pleased.