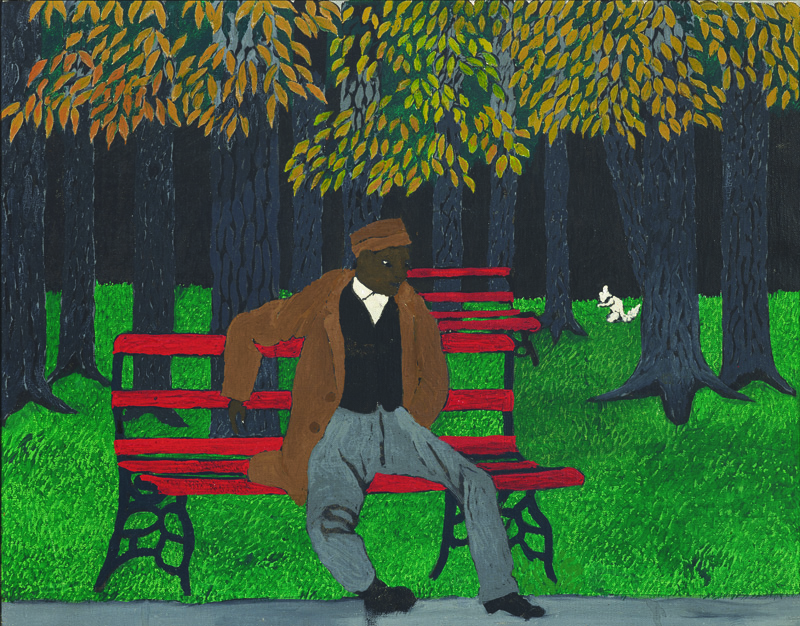 After teaching himself to paint in midlife, Horace Pippin, the most successful black artist of the 1940s, began his meteoric rise in 1937 by submitting his work to an art show in West Chester, Pennsylvania, his hometown. While he benefitted from an international fascination with self-taught artists in the years between the wars, Pippin was quickly championed as a contemporary artist, full stop, by modernist tastemakers including curator Christian Brinton, collector Albert Barnes, critic Alain Locke, and dealer Edith Halpert, who were eager to tie their reputations to his. By the year of his untimely death, he had amassed an enviable record of national and international exhibitions, prizes, and sales, and Selden Rodman’s Horace Pippin: A Negro Painter in America, the first monograph on a US artist of color, was underway.

In my new book Horace Pippin: American Modern, I look at the complex, sometimes subversive ways that the artist engaged memory, autobiography, history, the mass media, and his social and cultural networks. The following excerpt discusses The Ending of the War, Starting Home (Fig. 1), his first oil painting after years of burning images of outdoorsy subjects into small wood panels using a hot poker. It is probably no coincidence that this, his largest and most ambitious work to date, depicts a theme close to home. Pippin was a veteran of the US Army’s 369th Infantry Regiment, the all-black unit dubbed the Harlem Hellfighters, which served longer in the trenches than most other American troops and suffered the heaviest casualties, among them the artist himself. He was shot in the right shoulder and arm in September 1918, an injury that permanently impaired his range of motion. He remained active in his segregated American Legion post for the rest of his life.

As his first painting on fabric, The Ending of the War, Starting Home inaugurated a new phase in Pippin’s fine-art project, one that leveraged his combat experience in imaginative scenarios that approach the autofictional. The “Story of Horace Pippin,” a biographical statement that Pippin gave the Museum of Modern Art in 1938, explains that “this picture came to me when I thought of the last drive,” an apparent reference to his regiment’s role in the capture of the French village of Séchault early in the war’s final, Allied offensive. The dates inscribed on the reverse “S-Sep 15th 1930” and “F-Dec 21st. 1933,” accord with anniversaries associated with his own “starting home” from the war: his “Illustrated Notebook” implies that he was wounded a few days after September 12, and “The Story of Horace Pippin” reports that he left France on December 24. He worked the canvas so intensively over that three-year interval that it is, effectively, a polychrome bas-relief. The handmade frame extends the relief conceit, as he applied painted carvings of World War I materiel from the Allies and Central Powers—tanks, helmets, gas masks, and weapons—and even attached metal blades for the knives and bayonets in what may be the last gasp of his “fancy” cigar-box decorating practice.

Organized in horizontal registers of grass, woods, and sky, The Ending of the War, Starting Home depicts a full-scale Allied air-and-ground assault on fortified German positions in broad daylight. The palette is largely restricted to grays, blacks, browns, and dark greens so close in value as to be almost indistinguishable in places. Red makes an occasional appearance as blood, fire, or the insignias on German uniforms. The result is a dense, dark image that manages to evoke, viscerally as well as visually, some of the chaos and confusion of combat.

A triad of doughboys moves into the center foreground from the right. Their dark masks and uniforms blend with the ground, but the light gray blanket rolls, worn diagonally over the shoulders, are easy to spot. (The soldier at left has tossed his aside; see the gray oxbow shape in the central foreground.) Each gas-masked soldier has apprehended a German counterpart, whose blue-gray uniform and white skin make him a focal point in the dark field. These encounters form a triangle at the apex of which, near the compositional center of the painting, a German raises his arms in surrender at the point of an American’s bayonet. A fourth, unmasked American lies bleeding at the lower right framing edge, and his charcoal gray skin resembles that of the figures in Cabin in the Cotton, the painting that first won Pippin attention when it was seen and praised by Christian Brinton, a curator, and N. C. Wyeth, the illustrator.

The soldiers occupy a grassy patch punctuated by barbed-wire entanglements, shell holes, and bunker entrances, behind which runs a shallow, perhaps hastily dug trench in which the surrendering man stands. The middle ground is a forest of leafless hardwoods fringed by evergreens at the horizon, in which two more unmasked Germans retreat at left, as one at right leans or falls backward, presumably wounded. In the tree canopy, two black clouds at left suggest the result of aerial bombing, as an overturned plane billows more black smoke to the upper right. The sky is full of bursting shells and five dogfighting warplanes that fire on one another or are afire themselves. Two are marked with France’s red, white, and blue target insignia; one bears Germany’s Iron Cross; and their visibility attests to the daytime setting.

The Ending of the War, Starting Home has sometimes been understood to depict November 11, 1918, the last day of fighting in World War I—an impression reinforced by Pippin’s explanation that “they had to quit before we could go home.” The subject might seem an obvious choice for a veteran; however, Armistice Day for the artist and his regiment looked much different from the one depicted here. He saw the day from a French hospital bed, having been evacuated with a debilitating injury to his right shoulder, arm, and neck. Meanwhile, his regiment saw it from the Vosges Mountains, where they had been transferred after their heavy losses at Séchault.

Although Pippin missed the official, German surrender in November, he got an unofficial taste at Séchault, which he equates in his “Illustrated Notebook” with the start of the Germans’ home-going: “prisners were comeing throu our line. goeine Back. and every one were happy. that they were out of it. for they knew that, they would see home a gan some time.” His writings align with his painting in other respects, too. The assault at Séchault took place at the edge of the Argonne Forest in smoke- and gas-filled daylight, a rarity for frontline troops like the 369th, who largely undertook nighttime raids to avoid enemy fire. Pippin’s memoir reports traversing a “sea of shells craters across no man’s land” and “the swamp” as the regiment pushed into German lines, beset from the air, as “the Germens air plaines were after us good and strong.”

At one point, his company was reduced to four men, then reduced again. Is it a coincidence that Pippin depicts four Americans? One looks dead or dying, while the others move through barbed-wire entanglements that were the last defensive barrier before the German trenches. The green grass and the absence of greatcoats on troops of both sides suggest mild weather; the bare trees could indicate an autumnal leaf drop or the swampy conditions to which his memoir refers.

At the same time, the painting diverges from Pippin’s written account of Séchault in important ways. Nowhere does he describe confronting entrenched Germans face-to-face or taking them prisoner, both activities associated in his memoirs with nighttime raids. Instead, he writes about spending the daytime assault mostly pinned down by enemy fire, advancing from shell hole to shell hole to avoid it, or lying wounded at the bottom of a shell hole (a situation that would be invisible in the painting). By contrast, the Americans stand with a confidence that suggests a ceasefire, even though the bursting shells, burning planes, and wounded German at far right indicate that the battle is still raging.

In that respect, the scene seems to conflate various moments at Séchault, some—like the surrender—almost certainly imaginary, and the ambiguous mixture of fact and fiction raises questions about how Pippin understood the project. Is The Ending of the War, Starting Home analogous to his war memoirs; to autofiction, in which he tells a story about himself that may not be true; or to biography, in which he tells the story of someone else? We cannot answer because Pippin has obscured the nature of his authorial contract with us by seamlessly integrating “collective reminiscences” of indeterminate origin. In so doing, he freed us, per Philippe Lejeune, to read the picture according to our mood and to assume in that interpretive freedom something akin to his agency in mining his experience for a quasi-fictional narrative.

This article is excerpted and adapted from Horace Pippin, American Modern, published by Yale University Press.

Anne Monahan is an art historian based in New York.