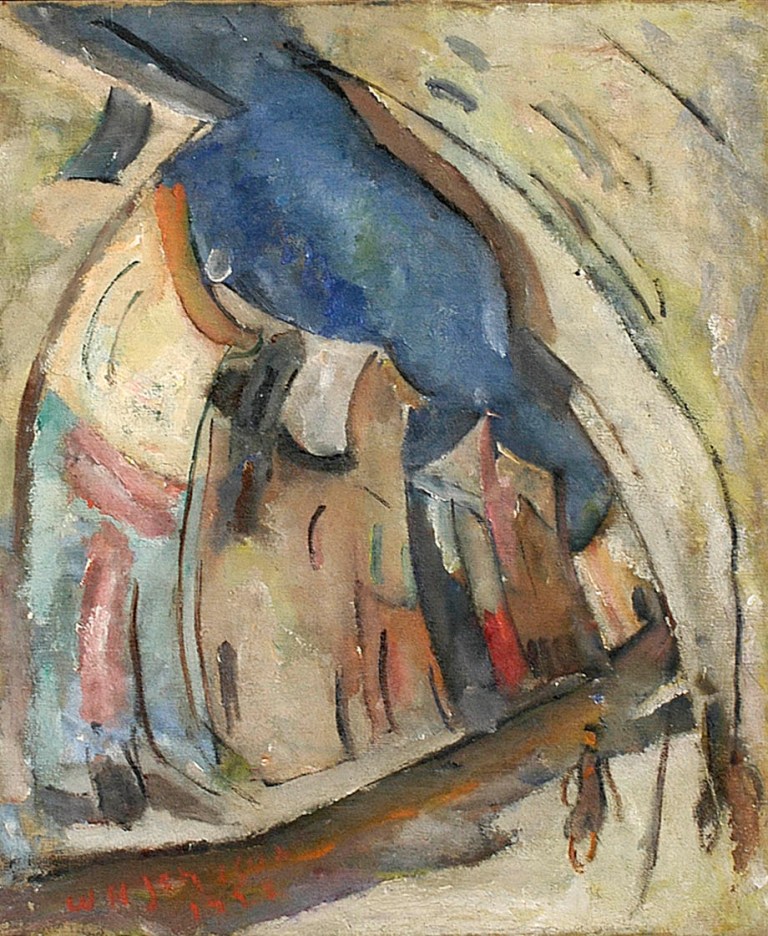 As you drive west out of Charleston, South Carolina, the land is flat for a good long while-un­til you reach the part of the state where the hills begin to roll. This is the “upstate.” If you drive too far, you will go “over the mountain” to North Carolina, but if you stop in time, you will find yourself in Spartanburg. You can tell they still grow peaches here. It was once a center for textile manufacturing and distribution, but that economy disappeared a generation ago, replaced by BMW’s ever-expanding North American production plant. Mill villages and family farms may have been supplanted, but what endures is the best of southern grace and hospitality-and fierce hometown loyalty.

This is where one of the most significant collections of southern paint­ings has been quietly accu­mulating for the last twelve years. You may not have heard of the Johnson Collection (TJC) because Spartanburg entrepreneur George Dean Johnson Jr. and his wife, Susu Phifer Johnson, began collecting casually. Their first acquisitions were romantic paintings, evocative and local. They were drawn to the nostalgic nature of the imagery: the fields full of peach trees or the unpaved road leading into the Blue Ridge Moun­tains. The piedmont landscapes that dominated their early acquisitions soon gave way to Charleston Renaissance painters and then broadened to include a sampling of the best regional artists, both the well known and the unsung.

Before long, there was no more room on their walls and their daughter Susanna, an art history student at the time, suggested that they find a way to make the paintings acces­sible to the community. And thus the enterprise of the Johnson Collection began. It has evolved from a personal odyssey to a mission to bring the best and most in­teresting southern paintings to a wider audience. While many of the collection’s one thousand works are on display, the Johnsons have deliberately chosen not to create a traditional museum setting for them. Instead, the paintings are sent out into the world in the form of funded traveling exhibitions, loans, scholarly publications, and a content-rich website. “For now,” says Susu Johnson, “we believe we can be most effective as a presence, rather than a place in southern art.”

Unencumbered by the administrative and financial burdens of a large physi­cal plant, the collection can be strategic, nimble, and generous. At present, its traveling exhibitions are offered to participating museums without the typical loan fees. And while the over­arching vision is to share the collection both regionally and nationally, Spar­tanburg’s own cultural vitality remains central to the project as reflected in its mission statement: “the collection also seeks to enrich its local community by inviting the public to interact with these inspiring works of art.”

When the Johnsons began collecting, there were few institutions outside the South looking at southern art, and, apart from a core of devout dealers, there were still not many voices to chal­lenge the long-held belief that southern things were derivative of their northern counterparts. Current scholarship sug­gests that the “divide” between North and South is little more than a construct, that it is the local spirit through which national ideas have been filtered that gives southern painting and decorative arts their unique identity. The paintings in the Johnson Collection offer a re­sounding “yes” to all questions of qual­ity and significance.

How did an initial collection of ethereal landscapes by such artists as Elliott Daingerfield and Joseph R. Meeker along with Civil War images such as Gustave Henry Mosler’s The Lost Cause (Fig. 5) and William D. Washington’s The Burial of Latané become part of what is now a surpris­ingly diverse collection spanning genres, gender, race, theme, and two-and-a-half centuries? The turning point came in 2006 when the Johnsons were offered a group of paintings and sculptures by William Melton Halsey, a Charleston artist who, though steeped in the lu­minous and narrative paintings of important regional artists, chose instead to paint huge, heavily layered abstrac­tions. The Johnsons purchased the collection, and it was not long before they began adding works by other mod­ern southern painters, including Ida Kohlmeyer (see Fig. 7), John McCrady, Will Henry Stevens (see Fig. 1), John Kelly Fitzpatrick, Dusti Bongé, Marie Hull, and Lamar Dodd (see Fig. 8). Over the years, some subspecialties have emerged: American scene painters who are distinctly southern, female artists, African-American artists with southern ties, and southern modernists.

Within these categories, the sense of place continues to resonate. For instance, a recent Johnson Collection book and companion exhibition, now on view at the Morris Museum of Art in Augusta, Georgia, examines the career of Eugene Healen Thomason (see Fig. 10). Thomason, a native South Carolinian, studied at the Art Students League in New York in the early 1920s and was influenced by the Ashcan artists there such as Robert Henri, John Sloan, and George Luks. He spent the majority of his life in an Appalachian crossroads not far from Susu Johnson’s hometown of Morganton, North Carolina. As detailed in From New York to Nebo: The Artistic Journey of Eugene Thoma­son, the Johnson Collection holds the largest single body of this American regionalist’s work.

In the collection’s early acquisitions, African Americans were typically rep­resented as the subject matter of white painters: the field laborers of William Aiken Walker (see Fig. 9), Thomas Waterman Wood’s nattily dressed apple seller, or the faithful domestic portrayed by Wayman Adams. As the scope of the collection expanded, the Johnsons became interested in African-American painters and began to acquire works by them. It has been assumed that early twentieth-century work by African Americans was created largely in northern urban centers where so many black southerners had migrated. However, a cultural awakening within black communities was occurring si­multaneously in Atlanta, Washington, D.C., and other southern cities. To reflect this development, the collection added works by such pivotal Harlem Renaissance figures as Charles Henry Alston (see Fig. 21), Aaron Douglas, and Malvin Gray Johnson, as well as the nationally recognized painters Romare Bearden, Beauford Delaney, William H. Johnson, and Alma Thomas, all of whom were southern-born. Later twentieth-century artists such as Benny Andrews, Dox Thrash, and Merton Daniel Simp­son are also represented, as are some of the great African-American artist-teachers, including Hale Woodruff (see Fig. 13) and John Biggers.

How exactly does the Johnson Col­lection define a work as southern?  Where does it draw the line? The answer is that the line is drawn about where the Union army drew it-around Wash­ington, D.C. The emphasis is on an artist’s personal or aesthetic connection, whether permanent or passing, with the place and the paradigm known as the South. Artists in the collection either hail from the South or spent a part of their active years working there. Beyond that, the collection includes a number of painters who may have trained in Chicago, New York, or abroad but who spent at least a little time in the South, such as Charles Burchfield, who recorded camp scenes during basic training in Columbia, South Carolina, or Alexander Brook, who left the faculty of the Art Students League to work in Savannah.

The Johnson Collection continues to grow and to examine southern art from different vantage points. In recent years the Johnsons have begun to focus on artists from Black Mountain College near Asheville. Under the aegis of Joseph Albers between 1933 and 1949, artists of national and international repute who made their mark on American modern­ism gathered in the Blue Ridge for study there. To tell this story, the col­lection has added significant works by Kenneth Noland, Jack Tworkov, and Esteban Vicente, among others.

Another area that is ripe for research is the interplay between university art professors and their pupils. There is, for instance, Edmund Yaghjian (see Fig. 16 and cover), a transplant from Providence, who had studied at the Rhode Island School of Design, taught at the Art Students League, and then led the art program at the University of South Carolina. While there, he taught Jasper Johns and Sigmund Abeles, both of whom are represented in the collection. Painters like Yaghjian are a fascinating mix of international sensibility and regional vision. Just over the state line at the University of Georgia art department that now bears his name, Lamar Dodd’s teaching also informed the work of countless students, including Margaret Moffett Law and Augusta Oelschig.

As interest in southern paintings continues to grow, the scholarship that gives it weight has found its footing at the Johnson Collection. The organiza­tion’s publication agenda is ambitious. Following the Thomason monograph and the 2012 book Romantic Spirits: Nineteenth Century Paintings of the South, the Johnson Collection expects to issue three more studies in the next five years.

Years of collecting have brought the Johnsons confidence, connoisseurship, and scholarly depth as they mount pathbreaking exhibitions and share their discoveries with their commu­nity and the world beyond it.

LAUREN BRUNK, a former Winterthur fellow and a former curator of the Johnson Collection, is vice president of Brunk Auctions in Asheville, North Carolina.

SCHOLARSHIP and the Johnson Collection

By 2008 the Johnson Collection had been catalogued and digitized, making it accessible to everyone. A directory of its impres­sive library holdings, more than four thousand volumes, is available on the collection’s website. In early 2014 TJC introduced a college and community educational series of visiting scholars called “Voices in American Art.” Sarah Cash, former Bechhoefer Cura­tor of American Art at the now defunct Corcoran Gallery of Art, served as the inaugural guest lecturer.

Within five miles of the collection’s offices are three institutions of higher learning: Wofford College, Converse College, and the University of SouthCarolina Upstate. A program of intern­ships with the Johnson Collection provides curatorial experience to under­graduates whose exhibitions are shown at the downtown gallery, a block from George Johnson’s corporate headquarters in the city’s center. An eight-week graduate fellowship offers advanced research opportunities for qualified doctoral candidates at all three institu­tions. At present TJC is working with the administrations and faculties of Converse and Wofford to hire a scholar-in-residence who will develop a cur­riculum in the art of the American South and work directly with the collection.

LAUREN BRUNK, a former Winterthur fellow and a former curator of the Johnson Collection, is vice president of Brunk Auctions in Asheville, North Carolina.