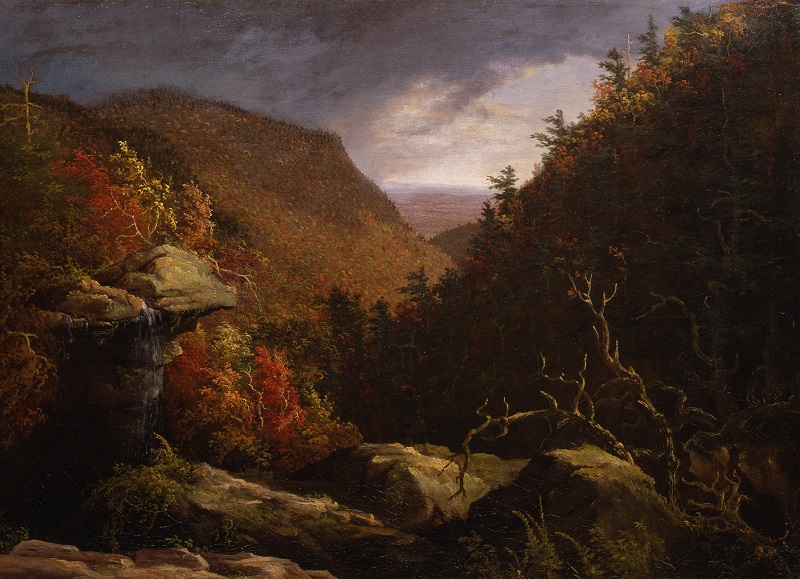 Even in such early work as The Clove, Catskills (1827) and View of Monte Video, the Seat of Daniel Wadsworth, Esq. (1828), the facture and compositional strategies employed by Thomas Cole—a working-class boy from northern England, self-taught as an artist—demonstrated surprising conversance with European landscape painting of the time.

How to explain it? A show currently on view at the Thomas Cole National Historic Site in Catskill, New York, Picturesque and Sublime: Thomas Cole’s Trans-Atlantic Inheritance, organized in collaboration with the Yale Center for British Art and Yale’s art history department, contends that it was access to prints that enabled Cole to develop his artistic gifts.

Cole apprenticed as an engraver in England, and then in Philadelphia after he and his family immigrated to the United States in 1818. The budding artist would have been surrounded by mezzotints, aquatints, and engravings reproducing or riffing off paintings by famous European landscape artists. The early 1800s was a time of upheaval for the genre. It was the beginning of the romantic period and two styles vied for dominance: the “picturesque,” as defined by the harmonious pastorals of seventeenth-century French painter Claude Lorrain; and the “sublime,” codified by English statesman Edmund Burke as “whatever is fitted in any sort to excite the ideas of pain and danger . . . or operates in a manner analogous to terror,” and which in painting took its cue from the work of Lorrain’s Italian contemporary Salvator Rosa. These styles would have been conveyed to Cole through such works—on view in the exhibition—as Joseph Wood’s etching The Hermit after Rosa, with its writhing, anthropomorphized tree; and Hadleigh Castle, a mezzotint by David Lucas after John Constable.

Cole got the chance to see the masterpieces of European landscape firsthand when a patron sponsored his return to Britain and the Continent from 1829 to 1831. As the lead essay in the show’s catalogue points out, Cole’s five-part series The Course of Empire, painted on his return to the United States, subsumes, painting by painting, the influence of one European master of landscape after another. By recombining the styles of his predecessors, Cole devised a new, grand idiom for the New World.