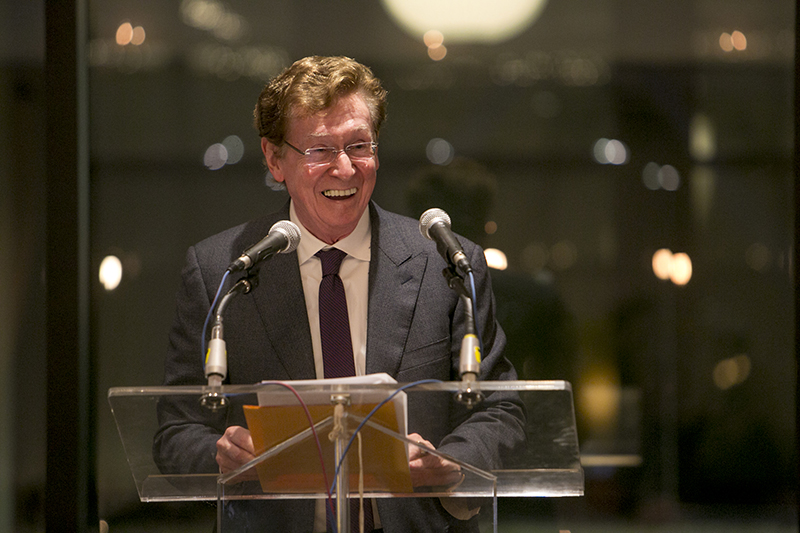 As in any great city, Chicago’s cultural scene has been nurtured—and shaped—to a great extent by the largess of its leading citizens, from department store magnate Marshall Field in the late nineteenth century to hedge fund founder Kenneth Griffin, who donated $125 million to the Museum of Science and Industry in 2019. Griffin’s gift certainly garnered headlines, as did the $100 million–plus he paid for Jean-Michel Basquiat’s 1982 canvas Boy and Dog in a Johnnypump, now on loan to the Art Institute of Chicago. The philanthropy of native son Richard Driehaus may not have gotten as much national attention, but at the time of his death in March of this year, his foundation had distributed—to a dizzying roster of recipients—more than $78 million since its inception in 1983, and his eponymous museum in Chicago had become a must-see for anyone interested in nineteenth- and early twentieth-century architecture and decorative arts.

Although he worked hard (his financial firm, Driehaus Capital Management, had $13.2 billion under management when he died) and lived well (he enjoyed fine Bordeaux), Driehaus always seemed to be amazed by his good fortune, by the fact that he was actually able to indulge his passion for art and design. Walking a visitor through his Queen Anne–style home on the city’s Gold Coast, through rooms outfitted with pieces by Hector Guimard, Louis Majorelle, and Josef Hoffmann, he would pause and look at these treasures as if seeing them for the first time. And it was clear from his enthusiasm and almost wide-eyed wonder, that he wanted you to be as thrilled by them as he was. Thrilled, not impressed.

Raised middle-class in a bungalow on the city’s southwest side, Driehaus learned the value of a dollar early on, when his father, a mechanical engineer, suffered a heart attack and money became an issue. “My mother told me I should deliver newspapers, to help toward my future education,” he recalled in 2011. “I still remember my route number, 567. Twice a week, Wednesday evening and Sunday morning. I made about $18, $19 a month.”

Like many kids of the 1950s, Driehaus was an avid coin collector. But unlike some, who simply checked out every bit of silver that crossed their palms, he subscribed to Coin World and studied the market. “I became interested in what dealers were willing to buy, rather than what they were selling,” he said. “Because whatever they were willing to buy they were going to sell and if I bought with them I would be buying with the markets.” By the time he graduated from high school, Driehaus had salted away two thousand dollars from his paper route and was sitting on several thousand dollars in collectible coins. At age fifteen, he made his first foray in the stock market. “It was July 29, 1957,” he said. “I bought twenty shares of Sperry Rand and fifteen shares of Union Tank Car Company.”

While his coin collecting was driven by a budding financial acumen rather than pure numismatic delight, as an adult Driehaus was impelled more by personal interest than which way the art market was going. And his acquisitiveness was akin to that of Charles Foster Kane. “He was both very focused and utterly spontaneous,” says Lydia Cresswell-Jones, senior consultant at Sotheby’s in London. “His interest in art nouveau, Tiffany, the Wiener Werkstätte, good lighting, and anything relating to the SS Normandie never diminished, but I could also find myself bidding [on his behalf] for maps, textiles, illuminated manuscripts, or garden statuary.”

“From my point of view, Richard did not collect from an investment perspective, he only acquired objects he was viscerally drawn to,” says Joyce Lee, who was Driehaus’s director of collections from 2008 to 2020. “Sometimes he acquired objects ‘in the style of’ a certain maker or period, even modern reproductions, simply because he loved the look of them. Certainly, quality was important, and he wanted the best representations by certain artists, but this did not limit him from enjoying lesser quality objects if their beauty or functionality spoke to him.”

His purchases could sit sight unseen for years, but they were always meant to eventually occupy a meaningful space, whether that was his office, one of his homes, or the 1883 Samuel M. Nickerson mansion, which he spent five years restoring and opened as the Richard H. Driehaus Museum in 2008. “For many collectors,” he said, “it’s not about environment, it’s about display. Not me.” Many of his earliest buys—posters, Tiffany glass, and architectural artifacts—were earmarked to outfit a bar he’d bought with a friend. “When I first saw him bidding at auction for random lighting fixtures, mantelpieces, furniture of all varieties, I couldn’t see where he was going,” says Greg Kuharic, who grew to know Driehaus well in his years as vice president of nineteenth- and twentieth-century decorative arts at Sotheby’s, New York. “Richard didn’t have a ‘great eye,’ but what he did have was a great vision for putting together the things that signified for him artistry, craftsmanship, beauty, tradition, refinement, and culture.”

Arguably, the epitome of that talent was expressed in a salon of his Chicago home, fashioned with the assistance of local architect John Nelson. Capped by a recessed, nickel-plated skylight, with a wall treatment echoing the curvilinear pattern of a wrought-iron gate by André Arbus and Raymond Subes that covers one window, the room is a remarkably cohesive merging of art deco and art moderne. Not period perfect—it was not meant to be—the space is a sensitively rendered and utterly swanky envelope for such pieces as an églomisé panel from the Normandie created by Jean-Théodore Dupas, and a series of murals designed by Joseph Urban and executed by Lillian Gaertner (b. 1906) for New York’s old Ziegfeld Theatre (built in 1927; razed 1966). “I bought these things independently, as beautiful objects, never knowing how I was going to use them,” Driehaus said. “But as I acquired more pieces, they inspired a room. It wasn’t easy to bring all them together in one place, but they work as a whole because of the consistent presentation.”

Publicly, Driehaus’s mark on the city is most physically manifest in his eponymous museum, housed in a residence with an art-collecting and philanthropic pedigree. Banker Samuel M. Nickerson sent a collection of Asian objects and modern paintings to the Art Institute of Chicago when he and his wife decamped for New York in 1900. Designed by Edward J. Burling (1819–1892), with his partner Francis M. Whitehouse (1848–1938), the house—an exhibit in itself—is spun around a grand entry hall incorporating seventeen types of marble.

Like similar enterprises, the museum was initially deemed a rich man’s fancy. “There was definitely the perception that this was a vanity project,” admits Lise Dubé-Scherr, who served as executive director from 2011 to 2017. “Richard empowered me to ensure we met all museological standards and best practices. By making the museum more accessible, developing extensive public programming, and offering a robust exhibition schedule, we quickly moved away from being perceived as ‘Richard’s museum.’”

The museum’s first show, Louis Comfort Tiffany: Treasures from the Driehaus Collection, was orchestrated by veteran curator David Hanks. Although exhibitions often draw from Driehaus holdings, the museum has also welcomed traveling shows, such as the New-York Historical Society’s Beauty’s Legacy: Gilded Age Portraits in America and The Art of Seating: 200 Years of American Design, organized by the Museum of Contemporary Art, Jacksonville and the Thomas H. and Diane DeMell Jacobsen PhD Foundation. The museum’s own shows have traveled as well. “The exhibitions, along with their companion publications, helped the museum gain the respect of our peers and increased awareness of the museum in Chicago and across the country,” Dubé- Scherr says.

Like any individual of pronounced passions, Driehaus had his quirks. “He had a particular style of bidding, that I named the Statue of Liberty,” Kuharic says. “Paddle held firmly aloft in his right hand at the first bid and continuously until the bid had either surpassed his comfort level, or he prevailed. He thought that by coming in early and doing so, that would intimidate the competition.”

“Anyone who knew Richard was aware of his deep interest in lighting,” says Dubé-Scherr. “We spent many hours discussing the ‘perfect’ lighting levels in the museum. Richard felt the lighting should be experiential, meaning very low, as it would have been during the 1880s. However, for safety reasons, it needed to be a little brighter. We ended up having a setting we affectionately called ‘Richard lighting.’ When we knew he was coming over for a visit from his office across the street, we would push the ‘Richard lighting’ button and in an instant, the lighting would adjust to his preferred level. He knew we had these two levels, but never said a word.”

With the exception of his considerable automobile collection, which included a 1948 Tucker and a 1966 Corvette 427, Driehaus usually didn’t venture much past the 1930s with his acquisitions. As he laughingly remarked, “I think people who collect modern art probably don’t live long.” But his philanthropy reached far and wide in Chicago, from small grants to dance companies to the $30 million he gave his alma mater, DePaul University’s business school. His love of historic architecture not only led him to acquire as his business headquarters the Richardsonian Romanesque Ransom Cable mansion (built 1885–1886) designed by Cobb and Frost, but to establish the Richard H. Driehaus Prize. Administered through the University of Notre Dame, the $200,000 prize is awarded annually to “a living architect whose work embodies the highest ideals of traditional and classical architecture in contemporary society, and creates a positive cultural, environmental, and artistic impact.” Berlin’s Sebastian Treese was honored earlier this year. Previous recipients include Robert A. M. Stern, Michael Graves, and Andrés Duany and Elizabeth Plater-Zyberk.

A highly personable fellow with an outrageously loud laugh that came out of nowhere, Driehaus was essentially a modest man. Even the big birthday bash he threw for himself each July at his weekend estate in Wisconsin was more about the enjoyment of his thousand-plus guests than it was about him. He loved making an entrance (once on the back of an elephant) and always got up and spoke—sometimes emotionally—about hard work and success, but the evening, with its fireworks and entertainment (Diana Ross performed at his last party, in 2019), was always extraordinarily good fun, with not a whiff of homage about it.