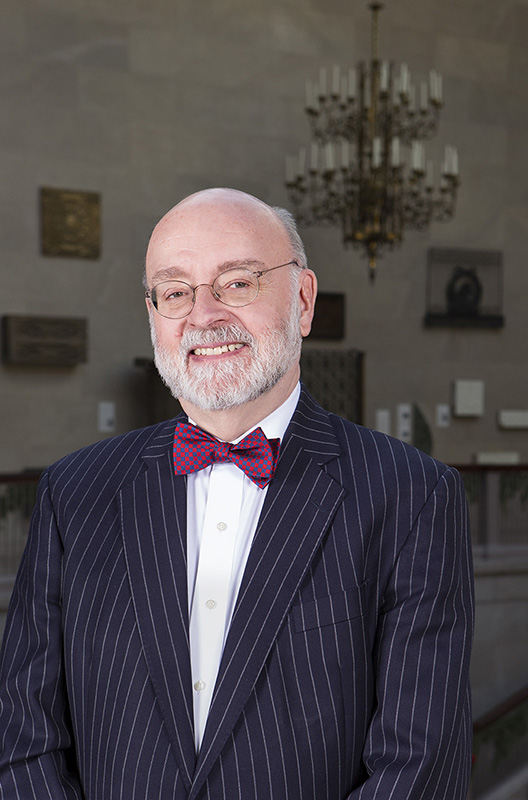 A much-loved scholar and curator and a notably generous and gregarious colleague and mentor, Christopher P. Monkhouse passed away earlier this year in Maine, at age 73.

A true polymath with wide-ranging interests in the fine and decorative arts and architecture, Monkhouse enjoyed an eminent and well-traveled career. His last post before he retired was as chair of the department of European decorative arts at the Art Institute of Chicago, and prior to that he had served as a curator at the Minneapolis Institute of Arts, the Heinz Architectural Center at the Carnegie Museum of Art, and the Museum of Art of the Rhode Island School of Design. Monkhouse’s education had taken him from Deerfield Academy to the University of Pennsylvania, to the Courtauld Institute of Art, and to a junior post at the Victoria and Albert Museum.

Testimony to the breadth of his knowledge and expansive curiosity can be found in the list of exhibitions he curated, among them Buildings on Paper: Rhode Island Architectural Drawings, 1825-1945 (1982) and American Furniture in Pendleton House (1986) at the RISD Museum, Currents of Change: Art and Life Along the Mississippi River, 1850-1861 (2004) at the MIA—a show upon which Monkhouse brought to bear his expertise in the poetry and cultural influence of his fellow Portland, Maine, native Henry Wadsworth Longfellow—and 2015’s acclaimed Ireland: Crossroads of Art and Design, 1690-1840 at the Art Institute of Chicago.

Here are some reflections and remembrances of Monkhouse from his friends and colleagues:

“Christopher was a beloved and sage voice in the art world who inspired countless colleagues and friends. He was a great mentor to me and so many others and possessed a remarkable ability to engage people across the globe. Simply put, Christopher taught me how to be a curator. Even more so, he demonstrated the importance of compassion, respect, and collaboration in all of one’s work. His passion for decorative arts was infectious, and I will always treasure the objects that he generously shared with me.”

“Although Christopher Monkhouse’s astonishingly productive life was cut much too short, his professional career encompassed an extraordinary breadth of interests that ranged across the fields of European and American architecture, fine and decorative arts, and material culture. He understood these fields as woven into a rich tapestry of culture, yielding infinitely complex patterns that constantly engaged his scintillating intellect. Christopher took enormous pleasure in sharing his expansive knowledge through the multitude of superb exhibitions, installations, and publications that he produced for the many distinguished institutions that he served curatorially, from the V&A, the Museum of Art at the Rhode Island School of Design, the Heinz Architectural Center at the Carnegie Museum of Art, the Minneapolis Institute of Art, and the Art Institute of Chicago. Renowned as a discerning connoisseur, he developed the institutional collections for which he was responsible in important new directions, and he took enormous pleasure in teaching successive generations of students and young professionals from these holdings with the greatest encouragement. A delightful and enthusiastic mentor and friend, Christopher will be sorely missed—but his marvelous spirit will live on in the many friends and colleagues whose lives he touched with the magic of inspiration.”

“Christopher Monkhouse so enriched the lives of all who had the good fortune to know him. In addition to his passion, imagination, and prodigious visual memory, he had an extraordinary capacity to rally people to the cause – be it preservation, exhibition, acquisition, or just plain civil discourse. His life in art was exemplary and his acquisitions for four great American art museums will enlighten and inspire future generations. I treasure the memory of my long-standing friendship – we first met at the Attingham Summer School in 1966 – with this old school New England gentleman.”

– Morrison Heckscher, curator emeritus at the American Wing of the Metropolitan Museum of Art

“Christopher and I first met in the spring of 1965, when he was a senior at Deerfield Academy. It was in the school’s art gallery, where he was the student curator of an exhibition of the paintings and drawings of James Wells Champney. He took much pride in this accomplishment. As a 17-year-old, Chris showed great promise, and he certainly fulfilled it at the University of Pennsylvania, the Courtauld Institute, the Rhode Island School of Design Museum, the Heinz Architectural Center in Pittsburgh, the Minneapolis Institute of Art, and finally the Art Institute of Chicago. I visited him at each of these very significant institutions, where he developed collections and exhibition programs with deep knowledge and great flair, culminating in his extraordinary presentation of Irish art at Chicago in 2015. In retirement, Chris had one more exhibition to offer, when he bought a grand 1850s house in the college town of Brunswick, Maine, and installed the furniture, paintings, prints and textiles he had spent his life collecting. Christopher was a true collector—for the museums that he served, and for his own connoisseurship and real pleasure, of family furniture, architectural subjects, arts and crafts furnishings. We all wish that he and we could have had more time to enjoy Brunswick and his splendid house. Christopher was also a collector of friends and he shared that collection widely, introducing so many of us to lifelong friendships that enriched his life and ours.”

– Donald R. Friary, director emeritus of Historic Deerfield, Inc., and past president of the Colonial Society of Massachusetts

“Some of my happiest memories of being with Christopher were in spaces crowded with objects, whether in Minnesota, Wisconsin, Kansas City, or Maine; whether in museum storage rooms or antique shops. I learned from Christopher’s great knowledge, but we also just enjoyed looking at things together. Sometimes we found treasures and other times we found altered legs on a chair or just inconsequential things. Christopher brought a wealth of scholarship to these conversations, but more importantly, he brought passion and curiosity. These outings were followed by long dinners talking about donors and dealers. With his wit, storytelling, and erudition Christopher brought the past to life for his many devotees, audiences, and me. He will be greatly missed but his legacy will live on through all his friends and all the objects he acquired for RISD, the Heinz Architectural Center, the MIA, and the Art Institute.”

“As natives of Portland, Maine, Christopher and I were lifelong friends with a shared interest in American art, architecture, and decorative arts. We met when I was a sophomore at Deering High School in Portland, and he was a junior at Deerfield Academy. Early in our friendship, he introduced me to The Magazine Antiques, for he owned a complete run that he had received for his twelfth birthday. Once in a Deerfield English class, Christopher received an assignment to write an essay on what you would take with you if you were exiled to a desert island. His answer was his run of Antiques.”

“Christopher was old school, in the best possible sense. He knew his subject too well to be unduly swayed by prevailing tastes yet was always alert to the contemporary relevance of historic objects. His extraordinary range, across all branches of design, decorative art, architecture, sculpture, and more, was surpassed only by his sheer energy, which was infectious and deeply authentic. With his passing, we have lost not only a wonderful colleague but a living repository of art historical knowledge, and an exemplar for what a museum curator can be.”

“Christopher was of a different era, so in tune with the objects and architecture he studied and loved. For him, every voicemail he left was like a considered letter and every tour a personal address. He was a natural mentor, free with knowledge and always present for advice. A connoisseur curator through and through.”

– Jonathan Tavares, associate curator of the applied arts of Europe at the Art Institute of Chicago

A celebration of Monkhouse and his life will be held this summer in Brunswick, Maine, at a time to be determined. In lieu of flowers, contributions in Christopher’s memory may be made to the Bowdoin College Museum of Art, 9400 College Station, Brunswick, ME 04011.