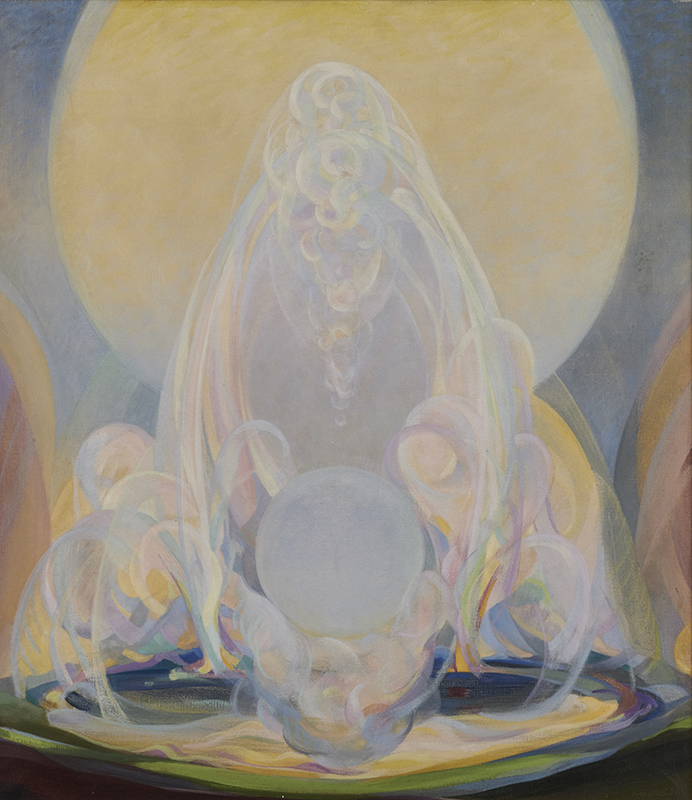 Like the Swedish artist Hilma af Klint—whose compelling abstract paintings have drawn throngs to the eye-opening retrospective of her work at the Guggenheim Museum in New York—the painter Agnes Pelton took inspiration from esoteric philosophies and, with a new exhibition at the Phoenix Art Museum, becomes another early twentieth- century woman abstractionist at last receiving her due. Agnes Pelton: Desert Transcendentalist reveals her high-keyed palette and eerie forms rendered in purples, teals, and oranges: overlapping parabolas, orbs, jagged protrusions, and “delicate veils, shimmering stars, and atmospheric horizon lines,” as the show’s curator, Gilbert Vicario, writes in the accompanying catalogue. The effect, he observes, “borders on science fiction.”

Born in Germany to American parents, Pelton grew up in Brooklyn amid family tragedy. When she was nine, her father, William, fatally overdosed on morphine. Her mother, Florence, gave music lessons to support the family. At age fourteen, Pelton started studying art at Pratt Institute under Arthur Wesley Dow. By the 1910s, her diaries record, she set out to render images of “perfect consciousness” on canvas. Her paintings, with enigmatic titles like Vine Wood and The Ray Serene, appeared at venues as prominent as the 1913 Armory Show.

Pelton practiced yoga and read voraciously—favorite authors included the Theosophical leader Helena Blavatsky—and she took trips as far afield as Taos, Honolulu, Rome, and Beirut. In 1931, just before she settled near Palm Springs, California, American Art News lauded her as a “harbinger of the future for other poets.” She exhibited at numerous California institutions but otherwise did not promote herself much. Her papers ended up at various repositories, including the Smithsonian’s Archives of American Art, while paintings left in her estate were widely dispersed.

Masterpieces have resurfaced in recent years. Fires in Space, her 1938 depiction of scattered starbursts, sold for about $270,000 at Stair Galleries auction house in Hudson, New York. The Los Angeles County Museum of Art acquired Lost Music II, her 1950s dreamscape of a gilded lyre disintegrating in clouds. The scene, accord- ing to the Phoenix exhibition catalogue, was based on her reading of a 1922 sonnet by Rainer Maria Rilke that describes lyre players as immortals “entitled to render unending praise.”