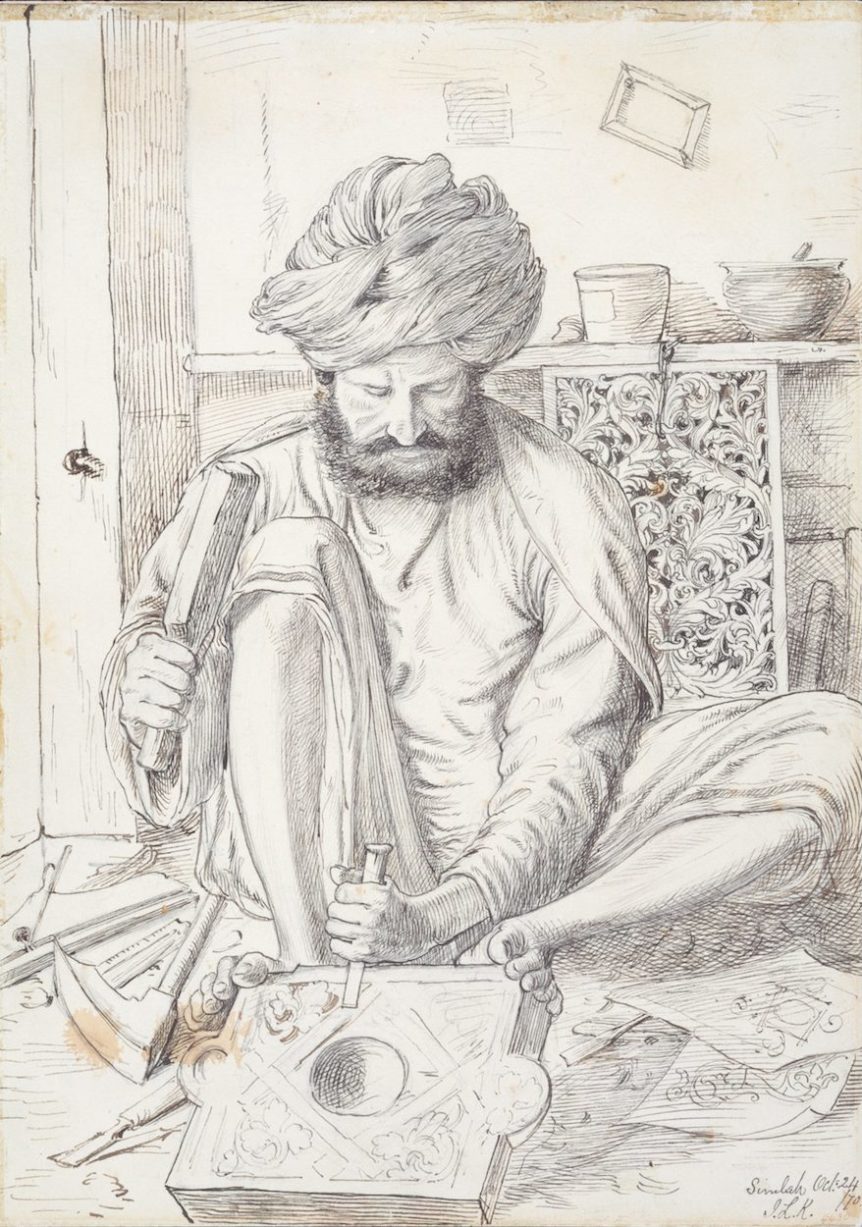 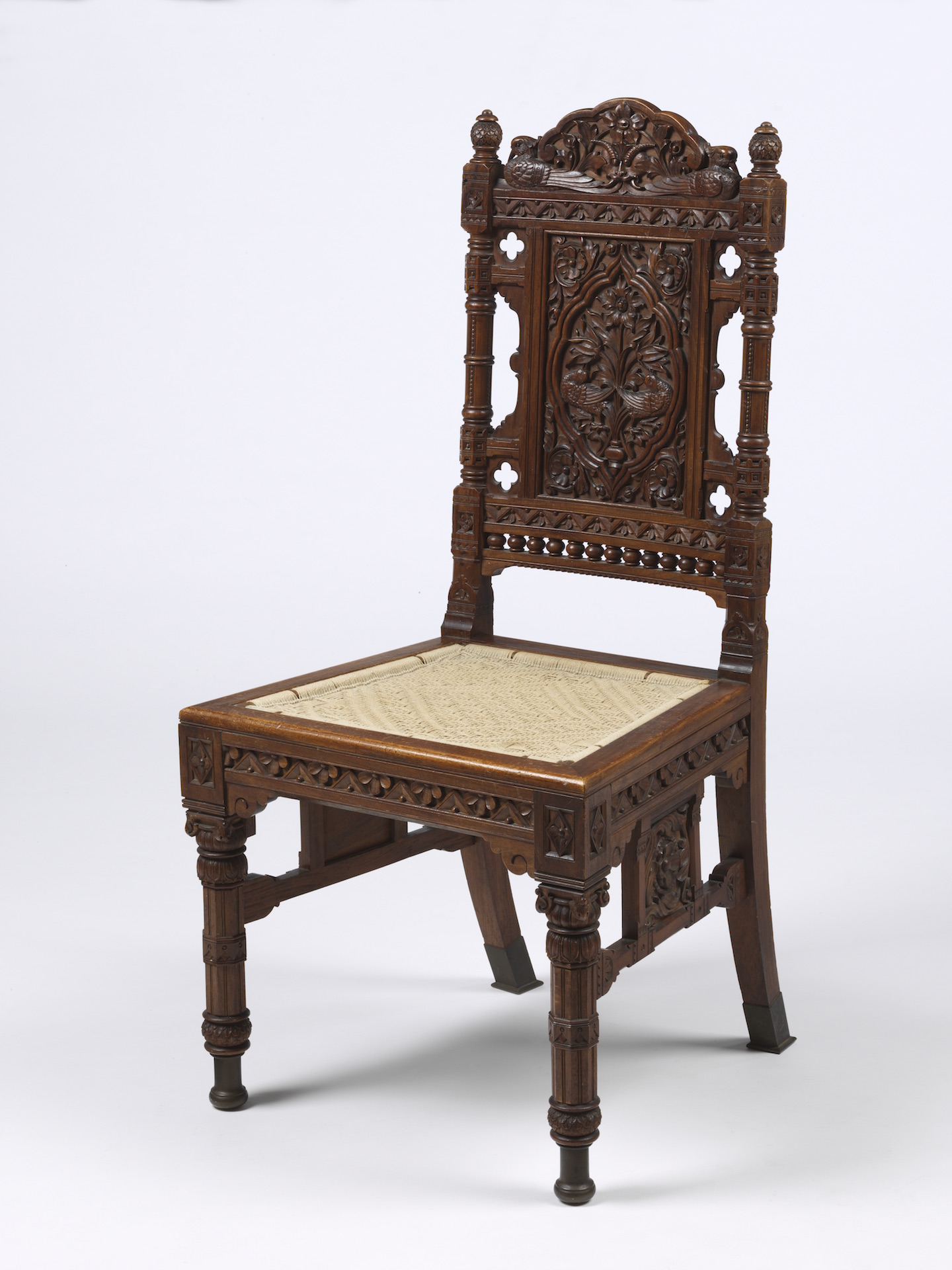 Susan Weber told us about some of her favorite works in the show:
“The exhibition includes a side chair for the Indian billiard room that Kipling designed at Bagshot Park in Surrey, the country home of Queen Victoria’s third son, Prince Arthur, Duke of Connaught. It was arguably the greatest project of Kipling’s career. In its timber, deep carving and decorative motifs, the chair is en suite with the billiard room’s paneling carved in Lahore.”

The name Kipling is synonymous with British India in the nineteenth century, but a new exhibition at the Bard Graduate Center Gallery in New York hopes to foster associations beyond Gunga Din, Kim, and Peachey Carnehan. John Lockwood Kipling: Arts & Crafts in the Punjab and London examines the career of Rudyard Kipling’s father, an admired and influential artist, designer, educator, and social reformer in England and India. The show, which was mounted earlier this year in London at the Victoria and Albert Museum, features some 250 objects, encompassing metalwork, furniture, paintings, relief sculpture, and architectural ornaments. Contributing editor Barrymore Laurence Scherer asked Susan Weber, the exhibition’s co-curator and the founder and director of the BGC, to tell us more. 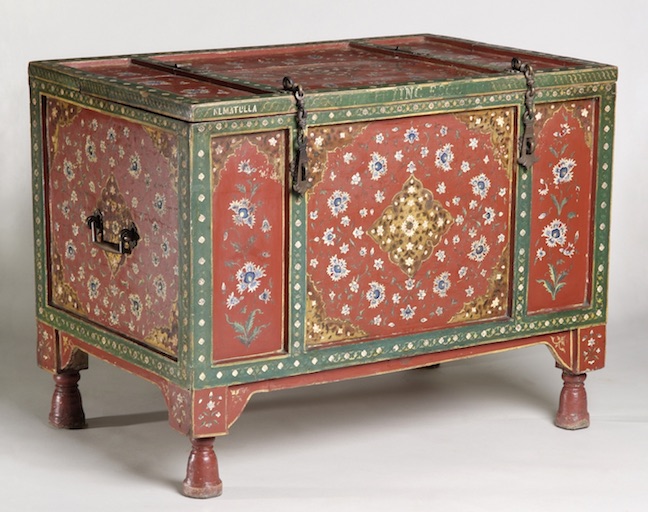 “Another favorite is a large traditional wedding chest with painted floral ornamentation owned by Kipling. Chests were usually used for the dowry of a bride, particularly her jewels and textiles. The front edge ,of the lid is inscribed J. L. Kipling Esquire and NLMATULLA—the name of the artist who decorated the chest: Naimut Ulla of Delhi.”

BLS: What prompted the show?

SW: We thought John Lockwood Kipling was one of the unsung heroes of the Victorian era. He was an impor- tant, though lesser known, contributor to the arts and crafts movement. Since so much of his work was carried out on the Indian subcontinent, he does not have the following of William Morris or John Ruskin. He was, however, an important protagonist in his own right.

What were Kipling’s signal achievements?

He was a talented painter, sculptor, and draftsman, but his greatness is due to his teaching, education reforms, and the exhibitions he curated in India and internationally. He pioneered the appreciation of India’s ancient but surviving arts and crafts.

Kipling was very aware of the decline and neglect of India’s hereditary village crafts from industrialization and the flood of manufactured goods from Britain. His aim was not simply to revive time-honored skills, but also to develop them for new markets in order to make them sustainable. Kipling believed that traditional arts and crafts inspired by the past are conducive to a stable and orderly society. 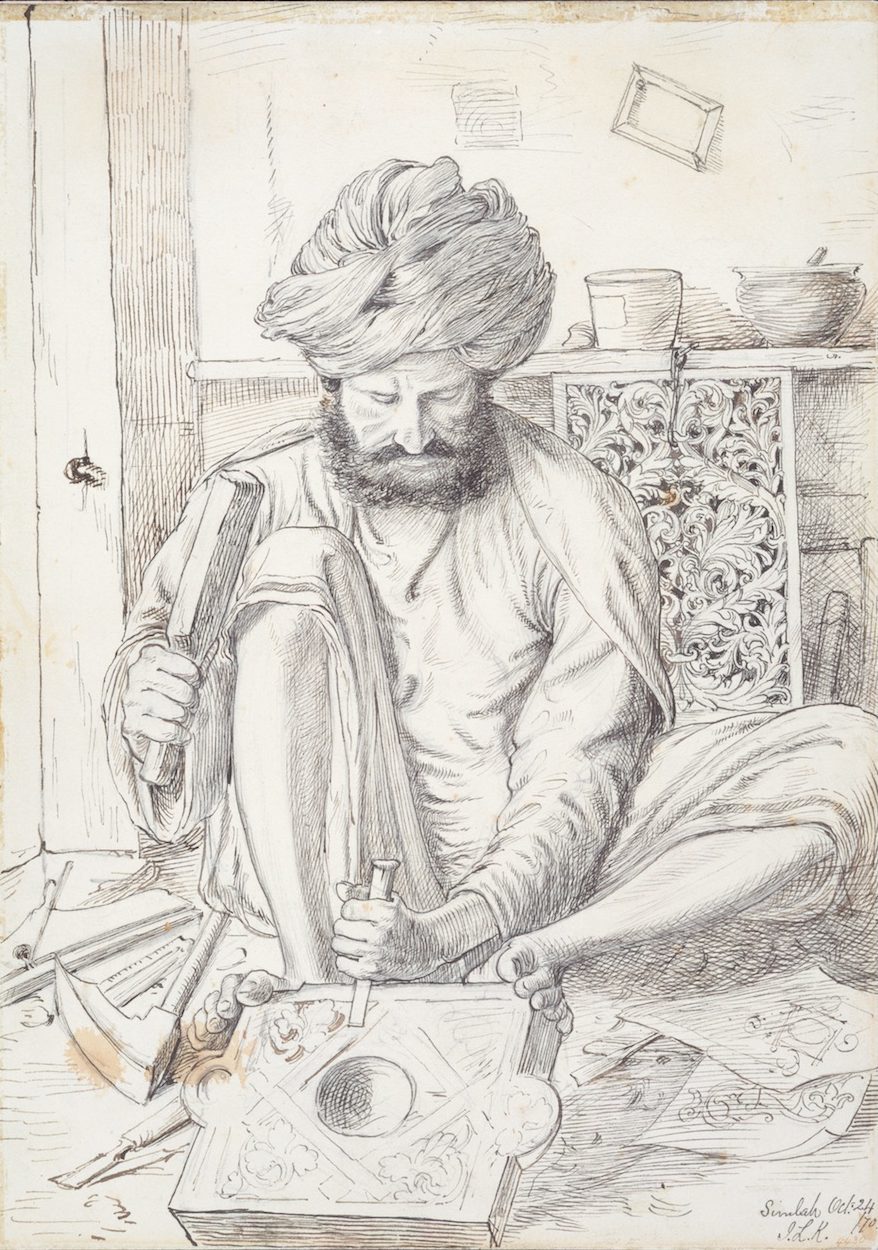 “Kipling’s drawing A Wood Carver, Simla, 1870, shows a turbaned wood carver seated on the ground surrounded by the tools of his trade, carving a floral design. The subject’s skill is displayed not only by his work in progress, but also by a completed panel behind him. With his determined look and confident, dignified demeanor, Kipling’s wood carver emerges as a fellow artist.”

His work to promote Indian arts and crafts led to their appreciation by an enlarged audience, including royal patrons. The international fairs he worked on were the most effective promotional vehicles of the nineteenth century. Core museum collections of Indian objects were purchased at or donated from these fairs.

Can we enjoy Kipling’s work without a troubling sense of post-imperialist guilt?

Yes. The discussion has evolved. With the passing of time and with more scholars engaged in the debate, the complexity of the situation is becoming better studied and discussed. Kipling and his legacy are seen in a positive light. When we began the project we were not sure how it would be viewed by curators and scholars in Pakistan and India. We were relieved by their very positive feelings and regard for Kipling. 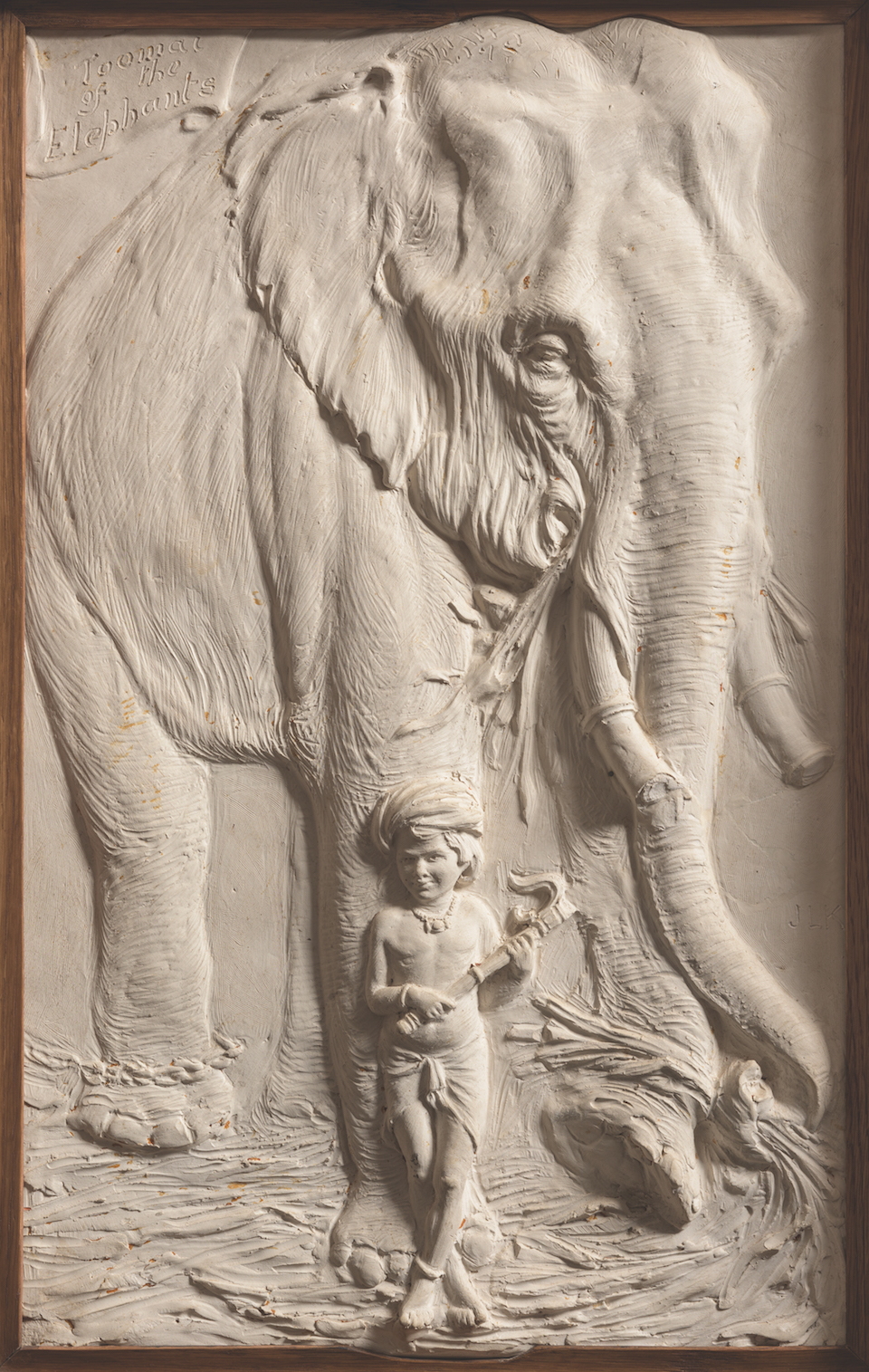 ”Toomai of the Elephants is a circa-1897 bas relief modeled in Kipling’s retirement years. It was photographed for publication as a book illustration—a completely new method for enhancing literary texts originated by Kipling. The huge beast, shown foreshortened at a three-quarter angle, is a virtuoso demonstration of Kipling’s ability to create the illusion of sculptural volume on an almost flat surface.”