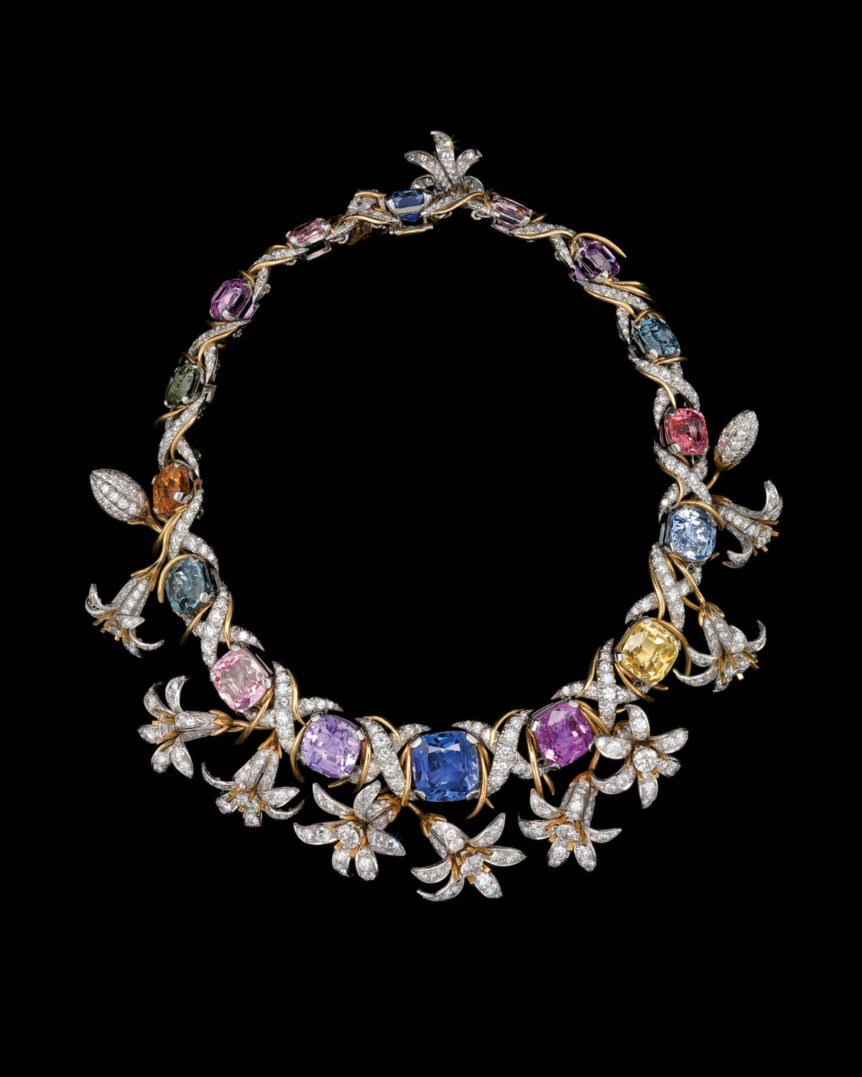 While promoting an integrated approach to gallery displays and a democratic appreciation for art of all kinds, the Virginia Museum of Fine Arts (VMFA) enjoys particular acclaim for its remarkable holdings of decorative art. The Sydney and Frances Lewis Collection of Art Nouveau and Art Deco attracts visitors from around the world (Figs. 6, 13); the Lillian Thomas Pratt Collection of Fabergé objects is unparalleled in the United States (Fig. 9); and the Jerome and Rita Gans Collection of English Silver boasts singular highlights by Britain’s most talented goldsmiths (Fig. 2). Yet decorative arts were not a priority in the VMFA’s early years. In many first-generation American museums, decorative art collections were established after the 1851 Exposition of the Works of Industry of All Nations exposed the inferiority of American manufactures before London audiences at the Crystal Palace. These collections were seen as a means to train designers in the applied arts and thus help advance business and industry. The VMFA’s cultural educational mission embraced an entirely different objective: to encourage an appreciation for the art and culture of diverse peoples through access to original works and, by that means, to promote mutual empathy and understanding.

That purpose first took shape in 1919, when John Barton Payne donated fifty-one works to the Commonwealth of Virginia and then, in 1932, challenged Governor John Garland Pollard with a $100,000 matching grant to build an art museum. The success of that challenge forged the public-private partnership that continues to operate the VMFA. For its first two decades, the museum educated the public mainly through paintings of primarily American and European origin. Aside from a smattering of isolated examples—a bronze hunting horn, a lectern, a tapestry—decorative arts did not feature in the collection until the arrival of antiquarian-inspired domestic objects from Wilkins C. Williams (Fig. 4). Even with the Williams gift, the development of the collection remained erratic. Ensuing years were marked by donations of early American, English, and Renaissance European works that reflected the era’s obsession with classical history, a fascination imbued with nostalgia’s twin comforts of tradition and permanence. Ironically, these sixteenth- to early nineteenth-century objects arrived alongside a collection of 179 gelatin silver prints by Frances Benjamin Johnston (Fig. 7). Completed on behalf of the Carnegie Survey of the Architecture of the South and a gift from the Carnegie Corporation in 1936, the 1935 photographs read like a visual narrative of the lost houses of the colonial South, their interiors bereft of the prized antiques long parted from their original settings. As Johnston herself made biblical reference, “old things have passed away; behold, all things have become new.”1

Curiously, however, only a handful of the southern decorative objects once housed in Johnston’s interiors could be found in southern museums, for two reasons: most remained valued heirlooms in southern families and, more germane to the history of museum acquisitions, southern furniture was under-researched and commonly disparaged as inferior to its northern counterparts.2 As the antiquarian movement gained ground with Philadelphia’s Centennial Exposition in 1876, accelerating the sociocultural phenomenon since dubbed the colonial revival, dealers and collectors of American decorative arts eschewed southern works as lesser or foreign-made. Southern decorative arts were virtually absent from the first important American decorative arts exhibition held at the Metropolitan Museum of Art in 1909. The tremendous success of its Hudson-Fulton Celebration’s display of colonial American furniture prompted the rapid-fire acquisition of the Met’s core American furniture collection, which privileged works produced in New York, Philadelphia, and Boston. Subsequently, the now-famous story of the misdirected comments of American Wing curator Joseph Downs at the 1949 Colonial Williamsburg Antiques Forum—that “little of artistic merit was made south of Baltimore”—sparked such ire that it prompted the VMFA’s groundbreaking exhibition, Furniture of the Old South, 1640–1820, in 1952 (Fig. 8). Curated by Helen Comstock, the collaborative exhibition featured 150 works by southern craftsmen and served as the featured topic of Williamsburg’s Antiques Forum that year and of the January issue of The Magazine ANTIQUES (Fig. 5). It also prompted the founding of the Museum of Early Southern Decorative Arts in Winston-Salem, North Carolina.3

At the time Furniture of the Old South opened to the public, the VMFA could claim only one piece of furniture with a southern origin, a block-front desk whose “W. H. cabinetmaker” remains unidentified. Arriving in 1949, the desk was one of seven pieces of American furniture that came with the Williams collection between 1937 and 1952.4 On the heels of the landmark exhibition, however, the Williams family also endowed the museum’s first restricted acquisitions fund. The Adolph D. and Wilkins C. Williams Fund has since underwritten more than two thousand works of art at the VMFA, including seminal examples of American craftsmanship.

The growing attention to decorative arts and the subsequent acquisition of important collections can be credited in large part to the talents and ingenuity of Leslie Cheek Jr., the VMFA’s director from 1948 to 1968. Cheek’s long tenure was characterized by innovative and sometimes eccentric decisions that transformed the institution from a regional art center into a national museum. Under his leadership, the fine and performing arts (in the form of the Virginia Museum Theater) were brought under a single roof. Outside, the nation’s first mobile art museum—the VMFA’s famed Artmobile—toured original works of art around the Commonwealth. Perhaps more important, Cheek’s training as an architect and designer positioned the VMFA to accept and interpret decorative arts as equal cousins of painting and sculpture.

Evidence of these converging forces followed the 1947 bequest of the Lillian Thomas Pratt Collection of Russian Decorative Arts. A memorial tribute from her widowed husband, John Lee Pratt, the gift laid the foundation for a European decorative arts collection rich in Russian Romanov history. Taking advantage of its romantic content, Cheek oversaw the construction of Fabergé galleries imbued with the drama of a theatrical stage set (Fig. 10). The combination appealed to contemporary audiences and the installation established a precedent for subsequent developments. In 1954 the VMFA received two related John Henry Belter sofas whose colorful provenance included Evalyn McLean, owner of the Hope diamond.5 In a period when “good taste” decried Victoriana, the gilded sofas were received by an enthusiastic Cheek not as elite acquisitions but as gallery furniture (Fig. 11).

It wasn’t until the 1960s that the VMFA began purchasing decorative arts; and not until the 1970s that it acquired works in earnest. The escalating acquisition program coincided with the museum’s growing footprint, which underwent three expansions between 1954 and 1976. These allowed for the 1968 Paul Mellon–funded acquisition of 150 works of fine and decorative art from the Nasli and Alice Heeramaneck Collection and the 1976 acquisition of furniture from the Dr. and Mrs. Brooks H. Marsh Collection. The completion of the second addition, the South Wing, in 1970, coincided with two landmark gifts: a bequest of about 450 works of European decorative art from Ailsa Mellon Bruce and the Sydney and Frances Lewis Art Nouveau Fund.

The combination of an integrated arts space, a democratic acquisition policy, and expanding galleries heralded a transitional moment at the VMFA. Over the next decade, in addition to funding the purchase of art nouveau works, the Lewises transferred to the museum their own extraordinary assemblage of fin-de-siècle objects (Fig. 13). By the 1980s, a North Wing had been added to house the Sydney and Frances Lewis Collection of Art Nouveau and Art Deco, as well as the Lewises’ collection of modern and contemporary paintings and the paintings collection donated by Paul Mellon. American art also gained ground. A collection of early American glass donated by Mr. and Mrs. William B. Thalhimer Sr. in 1969 was enhanced by additional works in various mediums donated or funded by the Gottwald family (Fig. 16), J. Harwood and Louise B. Cochrane (Fig. 12), and other generous patrons. At the same time, works from Robert and Nancy Nooter and funds from Arthur and Margaret Glasgow and the E. Rhodes and Leona B. Carpenter Foundation were quietly building the Asian, African, and Native American collections. With the arrival of the Gans Collection of English Silver in 1997 and the Rachel Lambert Mellon Collection of Jean Schlumberger in 2015 (Fig. 1), the VMFA had established significant representation in decorative arts across mediums and geographic regions.

The close of 2018 will mark a century of patronage at the VMFA, a hundred years shaped by the mission of its public-private partnership and the context of its evolving history. That history has likewise shaped the growth of its collections. Founded in the heyday of an antiquarian movement, the VMFA imbibed the orthodoxies prevalent among legendary aficionados like Henry Francis du Pont, Ima Hogg, Electra Havemeyer Webb, and Maxim Karolik. These “antiquers” created the prevailing paradigm for American dealers and collectors of decorative art. Wed to that model was the museum’s location in a region celebrated for its colonial past. The perfect storm culminated in an institutional adaptation of the colonial revival’s retro-visionary perspective narrated through artifacts appropriate to Frances Johnston’s interiors. While the VMFA continues to interpret objects as mediums of cultural history, those stories have been complicated by the personal tastes of individual patrons, the discerning eye of curators and collectors, and the expanding scope of multicultural research. This more critical and diversifying lens has both underscored the museum’s strengths and guided its subsequent strategies. The Pratt and Lewis Collections; the South Asian and African Collections; the American department’s important aesthetic movement holdings, and recent acquisitions of extraordinary works by enslaved southern potters, including the first signed and dated poem jar by the famed David Drake (Fig. 16), all speak to an evolutioncum-revolution at the VMFA and the promising trajectory for the future of decorative art.

SUSAN J. RAWLES is associate curator of American painting and decorative art at the Virginia Museum of Fine Arts, Richmond.

1 Johnston used the passage, from 2 Cor. 5:17, in the title of her first article, published in Saint Nicholas Magazine in 1882. 2 Notably, Esther Singleton, The Furniture of Our Forefathers (1900), which documented southern objects and history but attributed them to England; and Paul H. Burroughs, Southern Antiques (1931). Early dealers of Virginia furniture included J. K. Beard of Richmond and Bessie Brockwell of Petersburg, Virginia. Important later publications include the Museum of Early Southern Decorative Arts’ ongoing serial Journal of Early Southern Decorative Arts, which covers southern material culture prior to 1860; and, more recently, Ronald L. Hurst and Jonathan Prown, Southern Furniture 1680 –1830: The Colonial Williamsburg Collection (Harry Abrams, New York, for the Colonial Williamsburg Foundation, 1997). 3 For a collection of essays about Frank L. Horton and southern furniture, see American Furniture 2006; and Penelope Niven, “Frank L. Horton and the Roads to MESDA,” Journal of Early Southern Decorative Arts, vol. 22, no. 1 (Summer 2001). 4 In all, the Williams gift included American furniture, assorted American and European glass, European ceramics and textiles, and a noteworthy collection of Old Master paintings. 5 The two sofas were produced by John Henry Belter’s workshop for newspaper scion John Roll McLean, owner of the Washington Post and Cincinnati Inquirer. Inherited by his son and daughter-in-law, Ned and Evalyn McLean, owner of the Hope diamond, they were fodder in a divorce settlement and eventually sold at public auction following Evalyn’s death in 1947. Acquired at auction by Bessye “Polly” Morrison (Mrs. Hamilton Farnham Morrison), they were given by her to the VMFA in 1954. For a full history of the sofas, see Elizabeth L. O’Leary and Kathy Z. Gillis, “A tale of two sofas,” The Magazine ANTIQUES, vol. 181, no. 5 (September–October 2014), pp. 148–153.