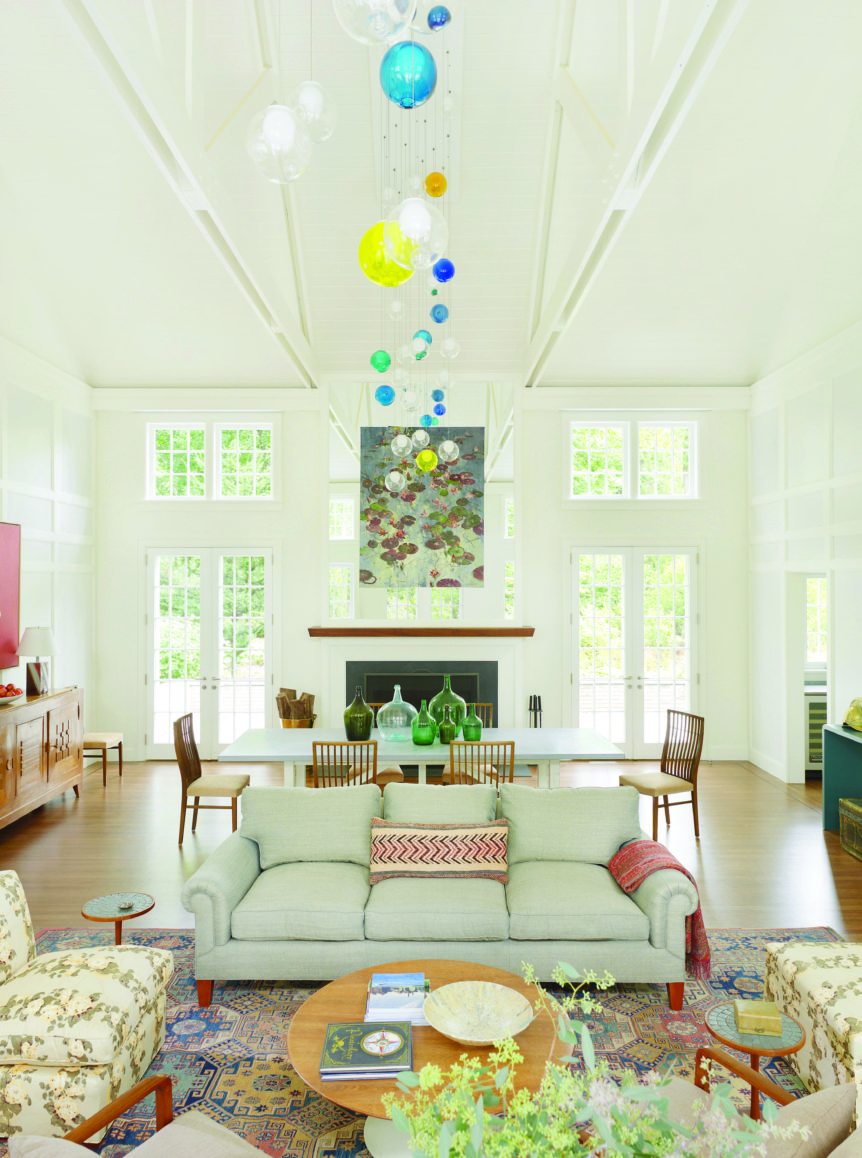 First a little background: in 1897, when The Decoration of Houses appeared, Edith Wharton was not yet Edith Wharton. She had published only a few poems and prose fragments during a period of despair and depression brought on by her marriage to the empty-headed Teddy Wharton and the frivolous social life to which she felt confined. Her first book, written with the architect and interior designer Ogden Codman Jr., seems to have had the effect of lifting her up and out of the darkness.

After Decoration came the novels, the building of The Mount—her Lenox, Massachusetts, estate—plus European adventures, literary friendships, and her long-delayed sexual awakening. Codman later claimed that he wrote the book, though most research seems to show that the manuscript was a collaboration and even something of a mess until Wharton’s friend Walter Berry took it in hand. Eventually, she got most of the credit and Decoration is still with us, often accounted the most influential decorating book to date. 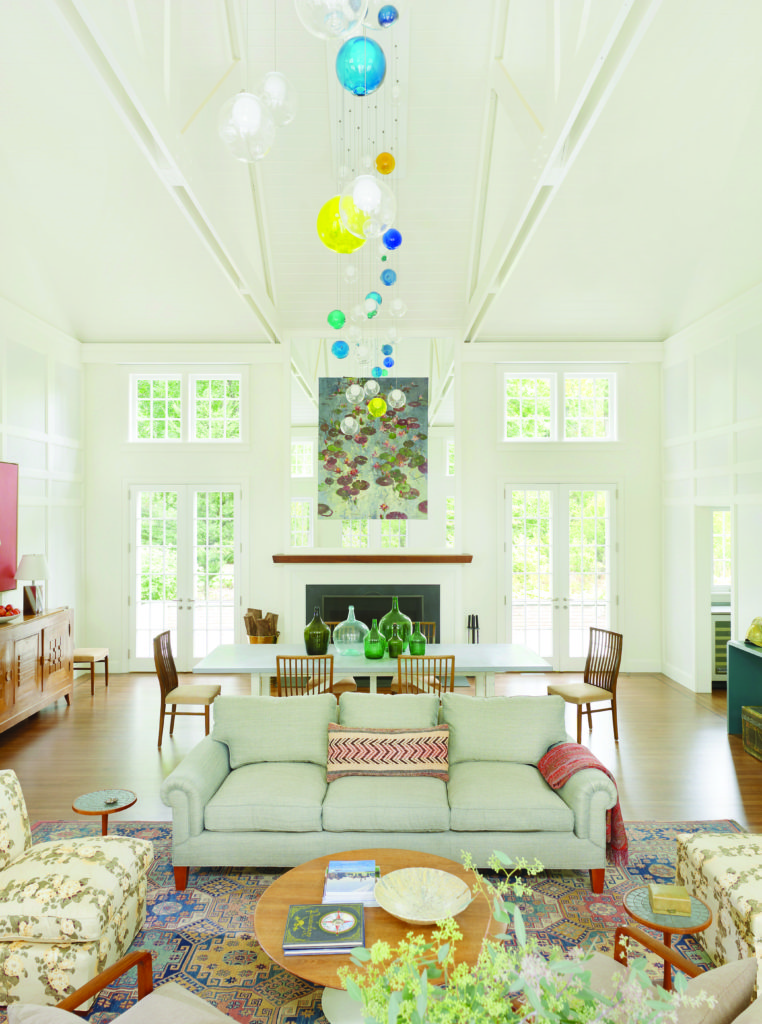 Fig. 1. In Thomas Jayne’s decor for the living room of a house on Long Island, the organic, rounded shapes of the hanging lights and bottle collection play off the classical symmetry of the architecture by Kathryn McGraw Berry and Reade Street Studio. Spring Passion, a 2012 oil on canvas by John Alexander (1945–), hangs above the fireplace. The pendant lights are by Bocci. Other furnishings include an early twentieth-century Sumak rug and a c. 1940s oak buffet by the French designer Charles Dudouyt. Photograph by Pieter Estersohn.

Why, you have to ask, would a book on interior design have been a watershed in Wharton’s life? The answer, if there is one, brings us to the deeper meaning of why we live how we live, something that animates Thomas Jayne’s new book—though he is careful not to get too heavy about it.

The oppressive interiors of Wharton’s youth, with their bric-a-brac, ponderous drapes, and claustrophobic wallpapers, are the secret antagonist of The Decoration of Houses. Classical principles cleared the air for her, promising a kind of visual freedom and a release from the atmosphere of her milieu that was aesthetic but more than just that. In Sanctuary, an early novel not much read then or now, the heroine uncovers a cruel deception at the heart of her fiancé’s inherited fortune: “She had begun to perceive that the fair surface of life was honeycombed by a vast system of moral sewage.” Interestingly, the rest of the novel is about the moral dilemma of an architect. It is not far-fetched to suggest that Wharton appreciated the way one kind of interior might lift the spirits, no matter what lay beneath its fair surface.

Wharton and Codman were not exactly pioneers; they were simply able to codify the classical principles of advanced taste that had begun to appear in some important interiors of their day. They did it with a fervor, authority, clarity, and stylistic elegance that have kept their work alive. It should also be said that they did it with an Olympian tone that is bound to amuse us today . . . when it doesn’t simply annoy. 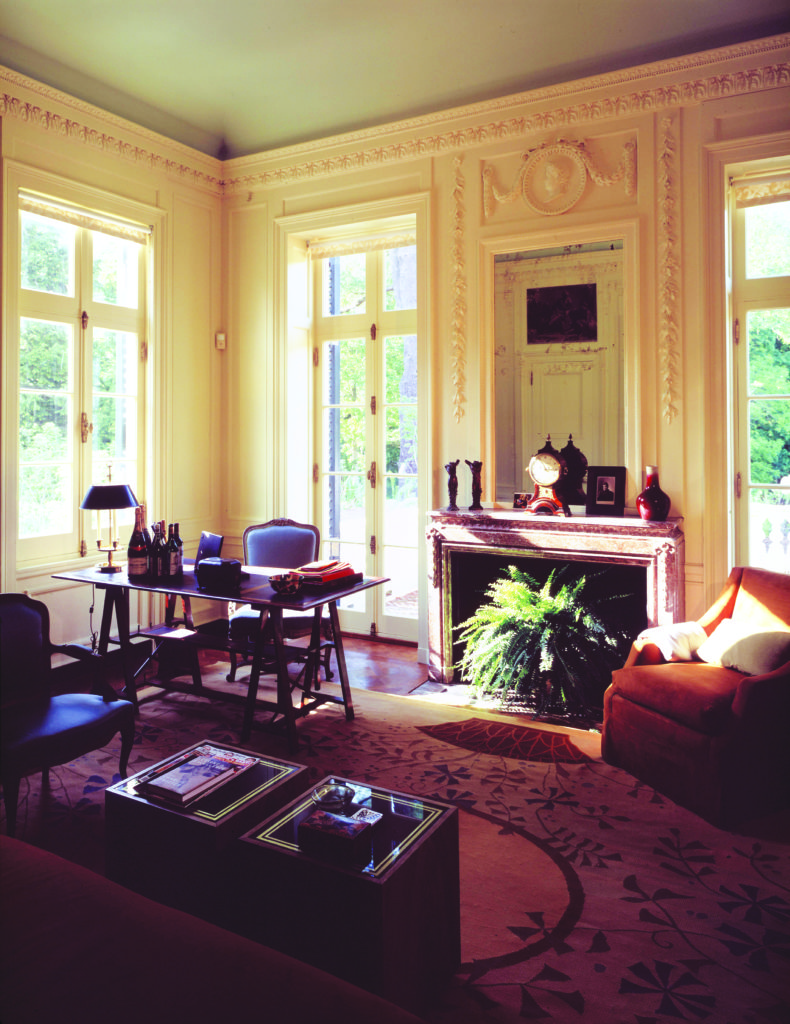 Fig. 2. For a 2002 decorator showhouse at The Mount—Edith Wharton’s country estate in Lenox, Massachusetts—Jayne took on Teddy Wharton’s den. He used hardwearing furniture and fabrics that Edith Wharton would have approved for such a room, adding contemporary touches such as a desk by designer Hélène Aumont and cube tables and a rug of his own design. Photograph by Stan Reiss.

And that is where Thomas Jayne comes in. Raised in Los Angeles, the epicenter of American midcentury modernism, Jayne is anything but Olympian, and his immersion in classical principles of design is in no way a reaction to his childhood environs. He was a boy who liked design, and liked architecture, and the more he liked them the more he wanted of both; he wanted them to go deep, to be atmospheric, to surprise as often as comfort, to speak of lives lived variously in the varied atmospheres of bedroom, living room, dining room, and so forth. Modernism was not enough to satisfy him and so he studied at Winterthur, the Metropolitan Museum of Art, and the J. Paul Getty Museum, and went to work at the venerable firm of Parish-Hadley in New York.

I first encountered Jayne’s work in 2002 when The Mount asked a few decorators to redesign its rooms. Jayne redid Teddy Wharton’s study (Fig. 2). He made it into a handsome, clubby refuge for a bonehead married to a bookish dynamo. There, on the desk, Jayne dropped a recent issue of the National Enquirer, the supermarket tabloid once known for gonzo headlines on the order of “Jackie Weds Dead Doctor” and now only a celebrity fanfest. Here, I thought, was a decorator who can anticipate the overt and covert wishes of his clients. 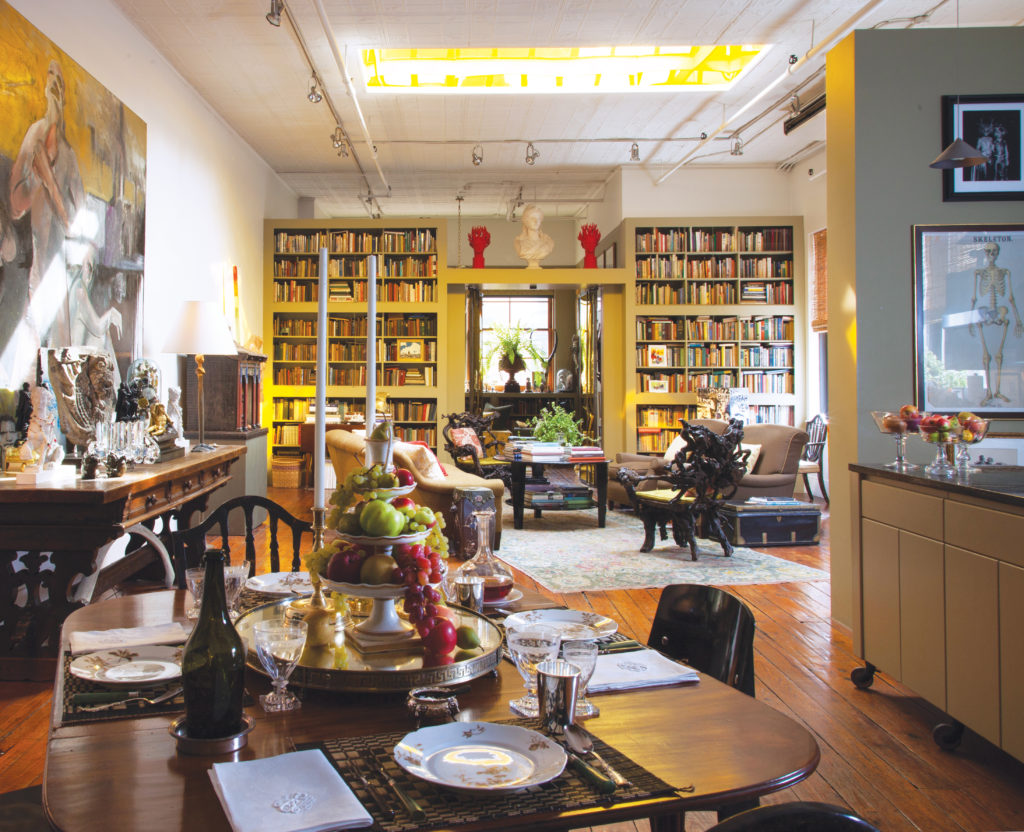 Fig. 3. Thomas Jayne and Rick Ellis’s loft in the SoHo neighborhood of New York is organized into discrete spaces, a contemporary plan suggested by tenets of The Decoration of Houses. The art and furniture include red sculptural heads by Oriel Harwood and a pair of eighteenth-century Chinese yew-tree-root chairs. The library is dedicated to books on American cookery. Photograph by Don Freeman.

He didn’t learn that from Wharton and Codman, and like many of the things he has added to their hardcore principles, it has served him well. His new book, Classical Principles for Modern Design: Lessons from Edith Wharton and Ogden Codman’s The Decoration of Houses, is in part an homage to the earlier endeavor, following many of its chapter headings (Walls, Doors, Bedrooms, and so forth) and quoting from the book at the outset of each, but it is also a master class on how inventive you can be if you have the bedrock of historical tradition beneath your feet, or, to mix the metaphor, a deep well to draw from.

Wharton and Codman laid down the law: interior decoration is interior architecture and the design of a room must follow its architecture. And yet, as this book shows, there are a lot of ways of doing that, many routes to classical design, and Jayne Design Studio has employed most of them, from Shaker and Gothic revival to more vernacular pathways. No matter the style, the basic premises underlying all the projects are the same—and they are worth examining.

Let’s start with the most controversial of them—the sense that there is a deeply intuitive and pleasurable response to classical proportion and order common to us all. You can argue with the premise, and a great many people have, but it is difficult to argue with the results as shown in the dozens of rooms in Jayne’s book. They do not prove the premise; they simply prove the pleasurable results of one man’s belief in it. 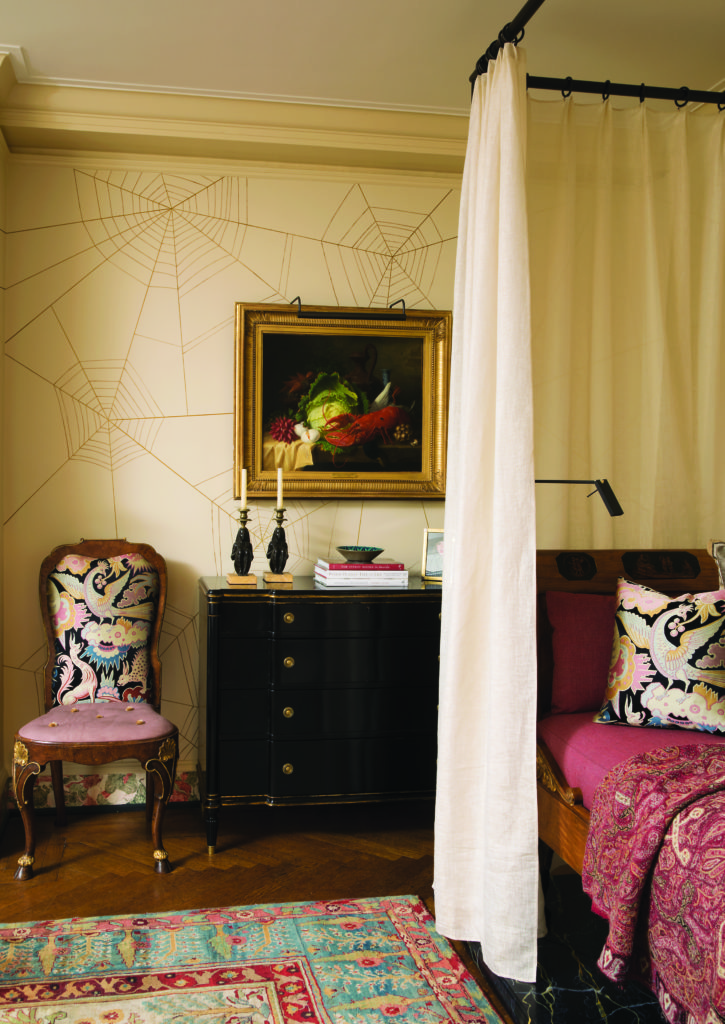 Fig. 4. Good rooms, according to Wharton and her co-author, Ogden Codman, require walls with a base and cornice and something architectural to connect them, such as columns or panels. In this Manhattan pied-àterre, in lieu of paneling the walls are covered in a pattern of gold spiderwebs, painted by artist Chuck Hettinger. Still life with lobster, a c. 1840s oil on canvas by Ange Louis Guillaume Lesourd-Beauregard (1800–1873) hangs on the wall. Furnishings include a late nineteenth-century Agra “Millefleur” carpet; a c. 1815 walnut Biedermeier daybed from Austria; and a French 1940s ebonized and gilt-trimmed chest in the Louis XVI style stamped “Jansen.” Freeman photograph.

In the same vein, the underlying notion that traditional decorating is satisfying because it arises from the language of nature, rather than the language of the machine as modernism does, is also debatable.

What isn’t open to question is that each of the rooms shown in Jayne’s book has its own distinctive atmosphere, created in part from his improvisations with traditional elements such as moldings and window treatments, in part from the personalities of the people who live there, and in part from the decorator’s sensitivity to these and other elements. Thumbing through the book is kind of like listening to all the variations Sonny Rollins can improvise on a standard such as Jerome Kern’s “The Way You Look Tonight.” It’s astonishing, pleasurable . . . and distinctly modern.

And it is all of these things because it avoids many of the clichés of the shelter magazine world. Eclecticism, for instance: you can’t read very far into an article in one of the shelter publications without finding that word as a badge of advanced thinking, when it is usually, at best, only an indication of hedging one’s bets, a kind of insincerity and promiscuousness that Wharton and Codman would have deplored. When Jayne mixes styles, as he does frequently, there is a rationale for doing so—as in the modern interpretation of a classical room shown here (Fig. 1) and in many other places, including the SoHo loft he shares with Rick Ellis (Fig. 3). 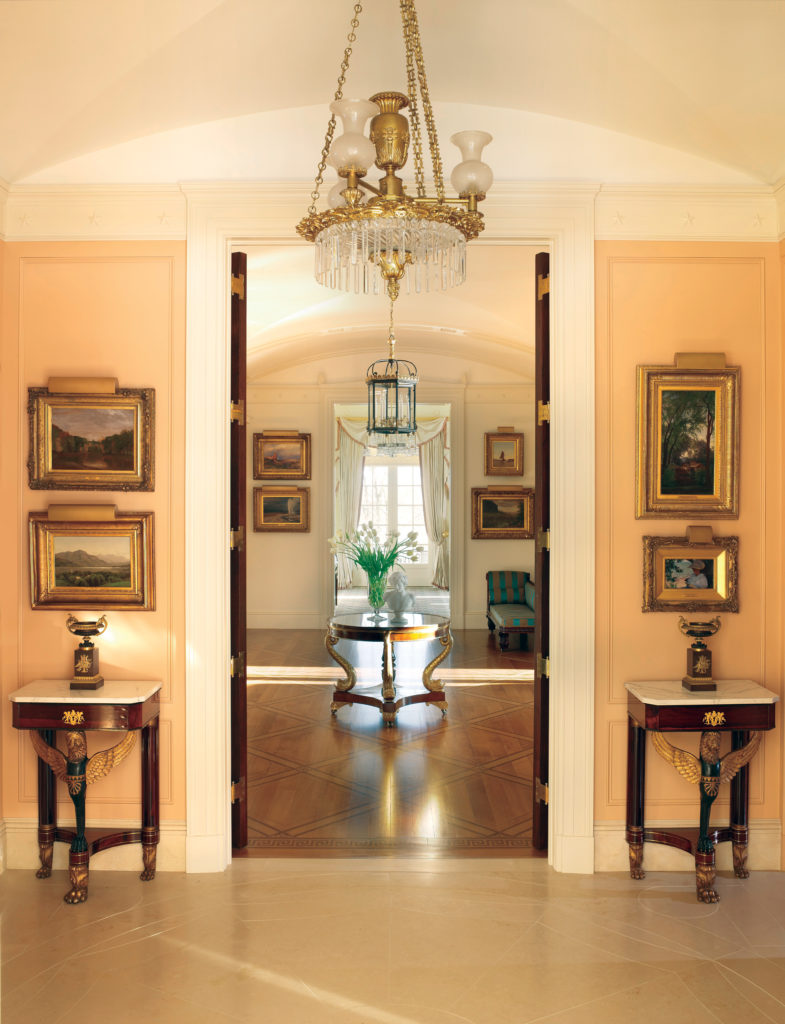 Fig. 5. Matching console tables by Duncan Phyfe, dating from about 1817–1822, add to the symmetrical arrangements in the entrance hall of a house in the Hudson River valley. As The Decoration of Houses states: “If proportion is the good breeding of architecture, symmetry, or the answering of one part to another, may be defined as the sanity of decoration.” Photograph by Jonathan Wallen.

To my mind, the most obligatory cliché in the modern lexicon of decorating is the open plan. Technology and social media have already erased the distinction between public and private life, and the current interior architecture of domestic spaces reflects this. It is on this topic that Jayne is almost as dogmatic as Wharton and Codman. “I have staked my decorating career on redeeming the living room as an active and welcoming space,” he writes. Collapsing living, dining, and kitchen into one unbounded space is, to him, an “impoverished and even reactionary way to live.” I love that!

And then there are bedrooms, always a weak spot in the houses shown in shelter publications, probably because they are not on public display and thus not open for admiration. Not so in a Jayne design, where personal objects and personality define these spaces (Fig. 4). 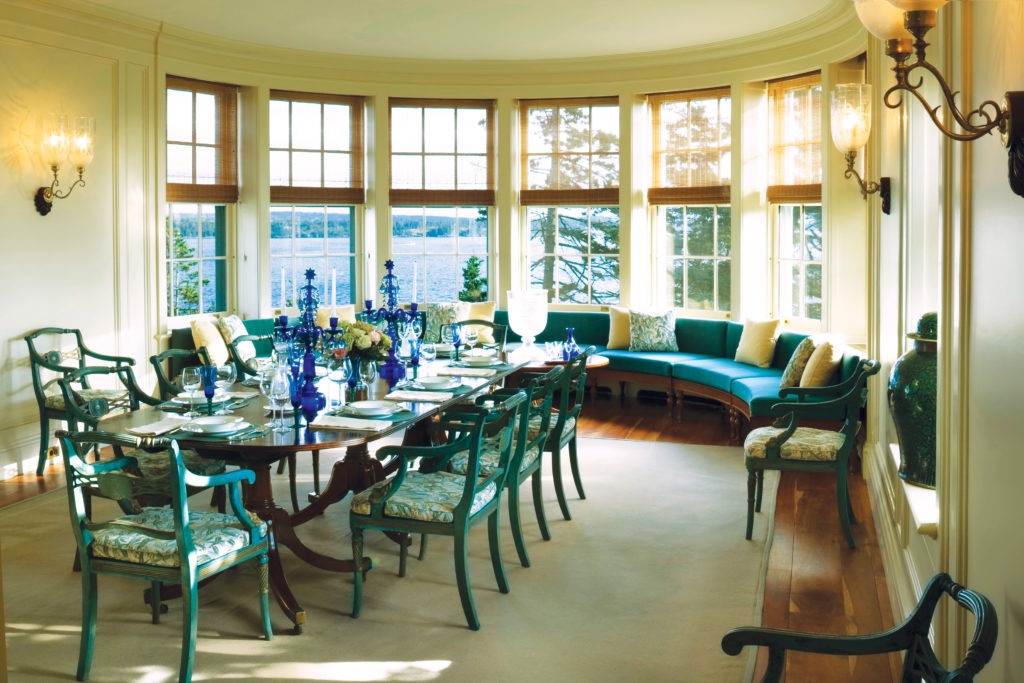 Fig. 6. Along with Wharton and Codman, Jayne believes that, most often, rooms with good architecture—such as this one in Maine—do not require curtains. The blue-and-green painted neoclassical dining chairs are likely Scandinavian and from the early nineteenth century (though a few of them are copies). Wallen photograph.

This is a richly textured book that future generations may look to in the way that many have looked to The Decoration of Houses. But they will do so as much for the ways in which rules are broken as for how they are observed. They will discover, for instance, that the dining area of the Jayne/Ellis loft is open not only to the kitchen but also to the sitting room.

They will also find that the living room of Jayne and Ellis’s New Orleans apartment (Fig. 7), my favorite room of any included in the book, does not follow the Whartonian advice that “pictures representing life and action often grow tiresome” and should be avoided. In this room we are surrounded by a busy frieze of the mighty Mississippi, with its rushing water, its steamboat belching a huge plume of dark smoke, its flora, fauna, and folk. 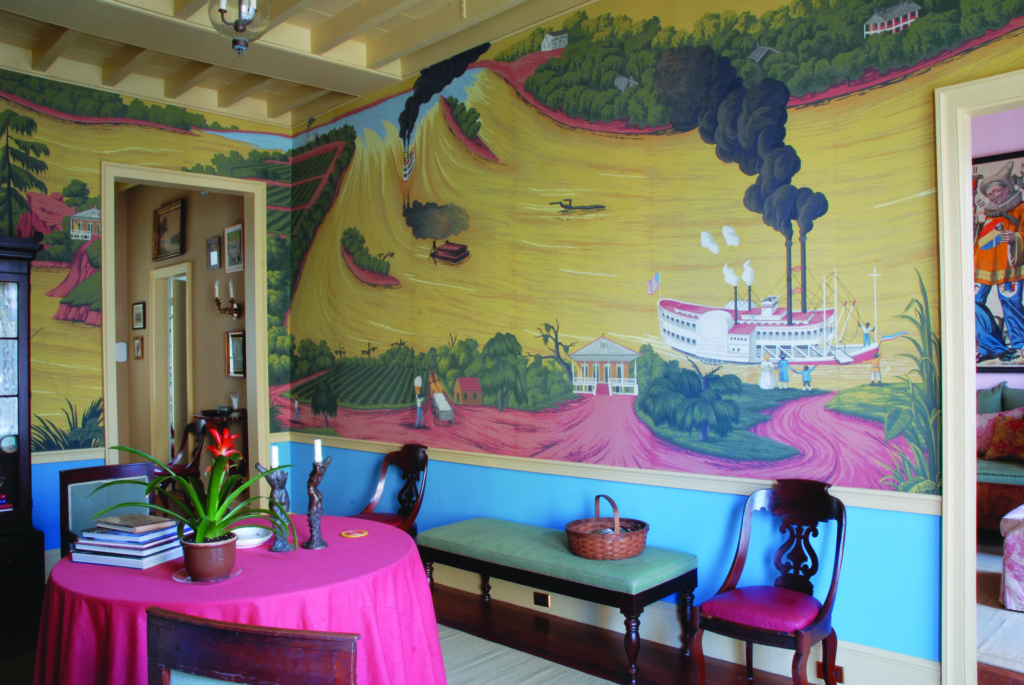 Fig. 7. Jayne writes that color is a traditionalist’s weapon. Color adds new life to traditional forms, and serves as a metaphor for all he does to employ tradition deftly. This room in Jayne’s New Orleans apartment is most often used for parties. (Wharton and Codman agreed that it is a luxury to have a “high-studded” room for gala events.) The mural, executed by the firm de Gournay, is based on C. H. DeWitt’s illustrations for Marshall McClintock’s 1941 book The Story of the Mississippi. Photograph by Kerri McCaffety.

What would Wharton say? I think she would descend from Olympus and pronounce the room to be of “irrefutable freshness.”