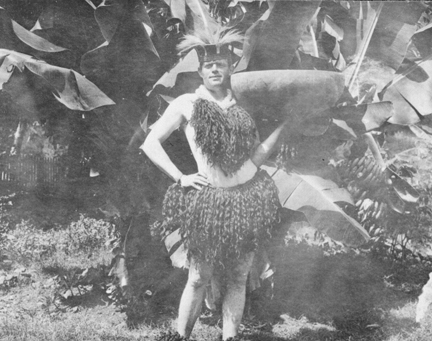 Jack London died young, at the age of forty, yet in some ways it is amazing that he lived as long as he did. To anyone who happened to see the thirty-one-year-old London and five other inexperienced sailors cruising through San Francisco’s Golden Gate on April 23, 1907, his survival would have seemed nothing short of miraculous. His boat the Snark–leaky and unable to heave to, its blown engine lashed to a rotting casing and its hold full of spoiling food–had been designed by London himself, his first and only attempt at naval architecture. The anchor wouldn’t winch, the lifeboat was unsafe, the head didn’t work, and the hull had to be hoisted out of the mud because the stern had sunk at the pier. The plan was to get as far as Honolulu and put in for repairs. Jack blamed deceitful contractors, unions, and bankers for overruns that drove the costs from the $7,000 he had budgeted to $30,000. Undaunted, he pressed ahead anyway, making landfall in Hawaii twenty-four hundred miles and nearly one month later, where the necessary improvements were made. The drama of the departure behind him, London could finally concentrate on the things that made the journey worthwhile–experiencing foreign lands and writing short stories, articles, and an account of his journey, all the while taking photographs of the people and places he encountered.

In the run-up to the voyage London had been contributing short texts to magazines and newspapers to raise cash. But the key to making the enterprise work financially lay in monetizing the trip itself. Published in 1911, the Cruise of the Snark would ultimately prove a bestseller and remains one of London’s more popular works. London viewed photography in part as a way to maximize his profits. Writing to his editor at Macmillan, Harold S. Latham, in 1911, he claimed to be “a professional photographer of fifteen years’ experience.”1 This was an exaggeration on both counts, since the photographs he included in People of the Abyss, his account of the poor living in the East End of the city of London, were the first significant pictures he published, and did not appear until 1903. Nor was London a “professional” photographer in the conventional sense, although he did sell photographs on occasion, primarily (if not exclusively) to illustrate his own writings.

Despite an association with famed German émigré photographer Arnold Genthe (1869-1942), London was, and remained, principally an author. He was said to have learned the basics of photography from a former classmate at Oakland High School Fred Jacobs and from his first wife, Bessie May Maddern, an amateur photographer who maintained her own darkroom.2 By the time of the Snark voyage, London boasted a small arsenal of equipment: Kodak Model 3A and 4A roll film cameras, a view camera, and cameras for panoramas (see Fig. 2) and stereo views.

London developed a distinctive photographic style in keeping with his egalitarian leanings. He favored a relatively long lens, enabling him to photograph a subject engagingly even some distance away. He was also able to control depth of field, so that the subjects themselves are often shown in sharp focus while the background is allowed to blur. This has the effect of providing context for the sitter, while at the same time suppressing details a viewer might find distracting. Shooting from slightly below his sitters, he afforded them an air of dignity, sometimes exaggerating the angle of view to create novel effects (see Fig. 4). Natural in style and free of conscious affectation, they are the visual embodiment of socialist political philosophy as he understood it, emphasizing humanity in the face of poverty and sympathy to the plight of exploited peoples.

London set off with a crew of five–his second wife, Charmian; her uncle Roscoe Eames; Paul Murasaki, also known as Tochigi, cabin boy; Bert Stolz, a Stanford engineering student; and Martin Johnson, the son of a Kansas jewelry store clerk who, like hundreds of others, had written to Jack petitioning to join the voyage. Johnson was appointed cook, although he had no prior experience. Roscoe was taken on as pilot but quickly revealed himself unable to navigate, so he was let go in Hawaii. Stolz also proved a disappointment, since his knowledge of engines turned out to be more theoretical than practical.

It is not always easy to attribute photographs taken during the cruise, since in addition to Jack, both Charmian and Martin Johnson are known to have used his cameras. Jack was most often credited as maker when pictures were published, but there is little doubt his cameras were passed around, especially when Jack himself appeared in a shot.

Building on his experience as part-time image-maker on the Snark, Johnson went on to become an accomplished photographer and filmmaker. Upon his return from the voyage, he produced a Snark-themed traveling road show combining storytelling with projected lantern slides made from his own photographs and Oceanic objects collected during the cruise (see Fig. 6). During a performance in Chanute, Kansas, he met Osa Leighty, whom he would later marry, and the two developed a partnership making adventure films.

London was already a celebrity at the time of the journey. Highly regarded as a writer of short stories, he had recently published several novels, including The Call of the Wild (1903), The Sea-Wolf (1904), and White Fang (1906). His distinct brand of semiautobiographical fiction based on real-life adventure struck a chord with readers. He was determined to maintain his usual pace of writing a thousand words a day, so the Snark was fitted out like a writer’s study. Equipment included a typewriter, four hundred books, a phonograph, and an astonishing five hundred records. Johnson would later remark how strange the Snark must have seemed far out at sea, barreling through the waves to an aria by Enrico Caruso.

The music helped pass the time, but Jack may have had other reasons for bringing along his phonograph. Playing recorded songs to Polynesian islanders was a novelty and a social lubricant. In a 1907 picture he depicted a group of Marquesan men in Nuku Hiva, sitting by his Victrola “Victor E” (Fig. 11). The phonograph itself still exists and is on display in the living area of London’s home in Glen Ellen, California, complete with brass horn dented on his South Pacific travels (see Fig. 10). London captioned his photograph “Tahitian Hula to Hawaiian Music on American Phonograph,” suggesting if not outright experimentation then at least a measure of cultural mischief.

Altogether London and his uncredited associates produced some four thousand photographs during the Snark voyage, the majority of which are in the collections of the Huntington Library, Art Collections and Botanical Gardens in San Marino, California. Most are postcard size–contact prints from the 3 ¼-by-5 ½-inch format he used most frequently. The corresponding negatives are held by the California State Parks as part of the Jack London State Historic Park collection. It has been suggested that London developed and printed many of the pictures himself; however, original envelopes stored with the negatives reveal that he also took advantage of labs in larger Polynesian cities, such as Suva, Fiji; Papeete, Tahiti; and Apia, Samoa.

Jack London State Park also possesses a number of photographs by third parties collected by Jack and Charmian during the course of the voyage, such as a group by the Australian photographer John Watt Beattie from his trip to the Solomon Islands in 1906. A similar group of Beattie photographs is held at the Peabody Essex Museum in Salem, Massachusetts, to which they were given by Charmian after Jack’s death (see Fig. 7). Charmian also donated several original Jack London photographs to the Peabody Essex.

The Snark traveled from Hawaii to the Marquesas, Tahiti, Samoa, and Fiji, ending in the Solomon Islands, where the trip was cut short by tropical illness. The original intention was to reprise Joshua Slocum’s circumnavigation of the globe, the basis for his international bestseller Sailing Alone Around the World (1900), which Jack had come to admire while reading it to children at a Sonoma summer camp.

In keeping with his interests as a writer, the primary points of reference for London’s voyage were literary. In her account of the voyage, The Log of the Snark (1916), Charmian names Herman Melville and Robert Louis Stevenson as inspirations for the cruise. The Snark visited the Marquesas partially in homage to Melville’s Typee (1846) and its sequel Omoo (1847). The crew read the stories aloud together, and on arrival at Nuku Hiva, attempted to retrace the steps of the protagonist Tommo, who was loosely based on the experience of Melville himself. However by the time the Snark called on the islands, disease carried by European and American traders had taken a terrible toll on the Marquesan population, and both Jack and Charmian separately recorded the misery and ill health they observed among those who endured.

Stevenson, who died in 1894, some thirteen years before the Snark visited Samoa, had also visited the Marquesas, inspired like London by Melville’s Typee. The parallels between their visits are at times uncanny, as when Jack London photographed himself clothed in the dress of a Marquesan “Chief” (actually that of a warrior), almost exactly as Stevenson’s stepson, Lloyd Osbourne, had dressed during their visit to the same islands nearly twenty years previously (see Figs. 12, 13). It is unlikely London would have seen the Osbourne picture, since it had not been published at the time.

Stevenson and his wife Fanny had settled in Samoa, creating the home they called Vailima, where Stevenson would live until his sadly early death at age forty-four. Jack and Charmian visited the estate, causing Charmian to describe Stevenson rhapsodically in her Log of the Snark as the “Man Who Understood,” the man with a “Heart of Gold,” and the “Master.”3

Upon their return, Jack and Charmian integrated Oceanic objects into their home alongside conventional American furniture (see Fig. 10). However, whereas the Stevensons included Oceanic objects alongside western furniture largely as they found them, the Londons went a step further, altering and adapting the things they collected to create new, hybrid forms. Consequently bark cloth was attached to curtain rods and converted into drapes, poi bowls were drilled and hung from the ceiling to create lamps, and ceremonial posts were cut up and turned into chair backs. These interventions, while irreversibly damaging the original objects, created something uniquely the Londons’ own. For better or for worse, the Londons were among the first to have practiced such comprehensive repurposing of non-western objects for interior decoration.

Taken in the context of the long history of ethnographic photography in the South Pacific, Jack London’s photographs are laudably neutral, refusing to capitulate to conventional representations of Polynesian culture. Yet there was a moment, unique among his photographs, when London let down his guard. For a single sitting in Samoa–just one roll of film in the middle of the voyage–he retreated to old stereotypes, showing a young Polynesian girl, languorous and partially nude, engaging in provocative poses in the studio (see Fig. 15). With them, the entire fraught history of western representations of Polynesia comes rushing back–the search for the physical manifestation of paradise on earth, straightforward eroticism, easy living, and an alternative to western mores. It was an experiment; an attempt to explore Polynesian sexuality by using the camera in a different way. London did not often fall into such easy traps. But having done so, he recalibrated and moved on, returning to the realistic style he had developed earlier in the voyage. The role of fantasist did not fit him. In writing and photography alike, Jack London was seldom content to be a voyeur.

PHILLIP PRODGER, formerly curator of photography at the Peabody Essex Museum, is now the head of photographs at the National Portrait Gallery, London.