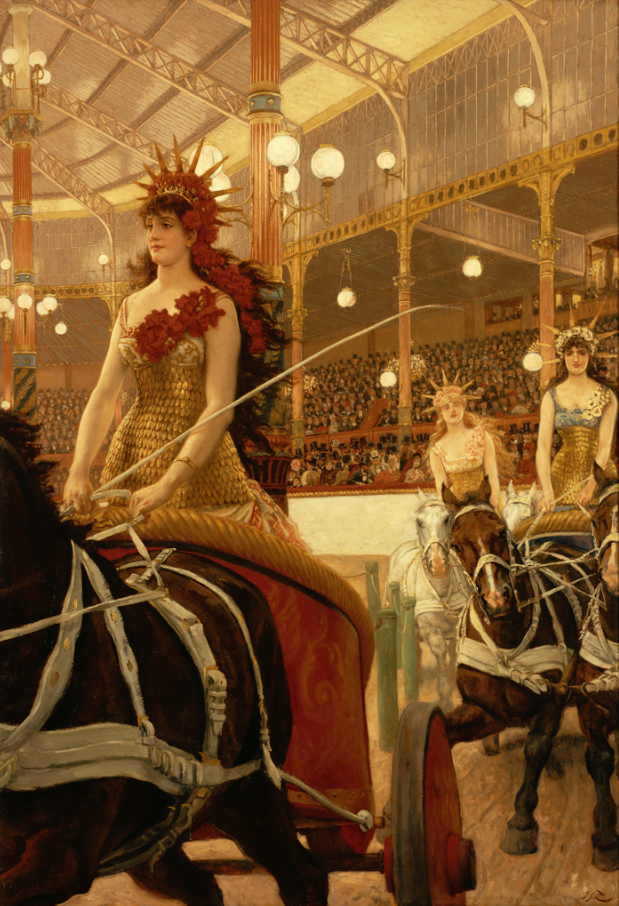 Born to a prosperous family of milliners in the French port city of Nantes, James Tissot, like his parents, had an eye for fashion and a head for business. Skilled at drawing from a young age, Tissot studied in the late 1850s at the École des Beaux-Arts in Paris; he befriended Edgar Degas and Édouard Manet. Success quickly followed his first exhibition at the Paris Salon in 1859. Portraits of the haute bourgeoisie and scenes from their social milieu became Tissot’s stock in trade. These vibrant, finely detailed images showed off his particular talent for capturing the chic and shimmering folds of women’s raiment.

Tissot served in the disastrous Franco-Prussian War in 1870, and took part, though perhaps only half-heartedly, in the Paris Commune the following spring. Shortly after that rebellion was crushed, Tissot—it’s unclear when he anglicized his given name, Jacques—decamped for London, where his work had been well received in the 1860s. He lived there for the next eleven years, enjoying a dandy-fied lifestyle as he established a hugely successful following among the late Victorian merchant class for his genre paintings and nuanced scenes of contemporary polite society at play in Hyde Park or boating on the Thames.

Degas invited Tissot to show his work in the first exhibition of the impressionists in 1874. He declined. Those who accepted are far better known today, and the Tissot exhibition now on view at the Legion of Honor in San Francisco is the first major retrospective of his work in twenty years. The show gives equal heft to his post-Britain career. Following the death of his beloved live-in mistress Kate Newton, Tissot returned in 1882 to France, where he rediscovered the devout Catholicism of his youth—while dabbling in spiritualism—and painted mainly Bible scenes for the rest of his life.