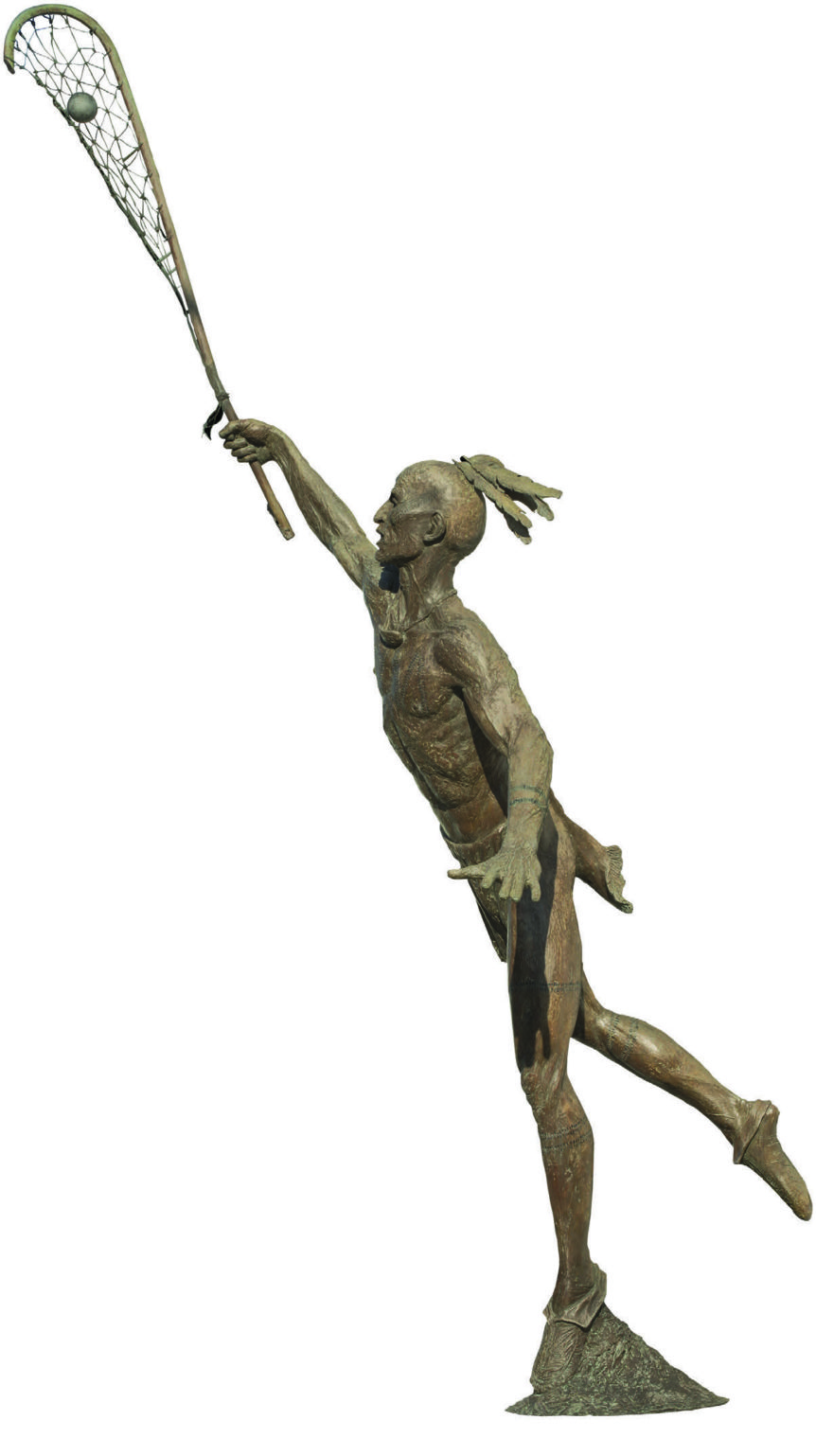 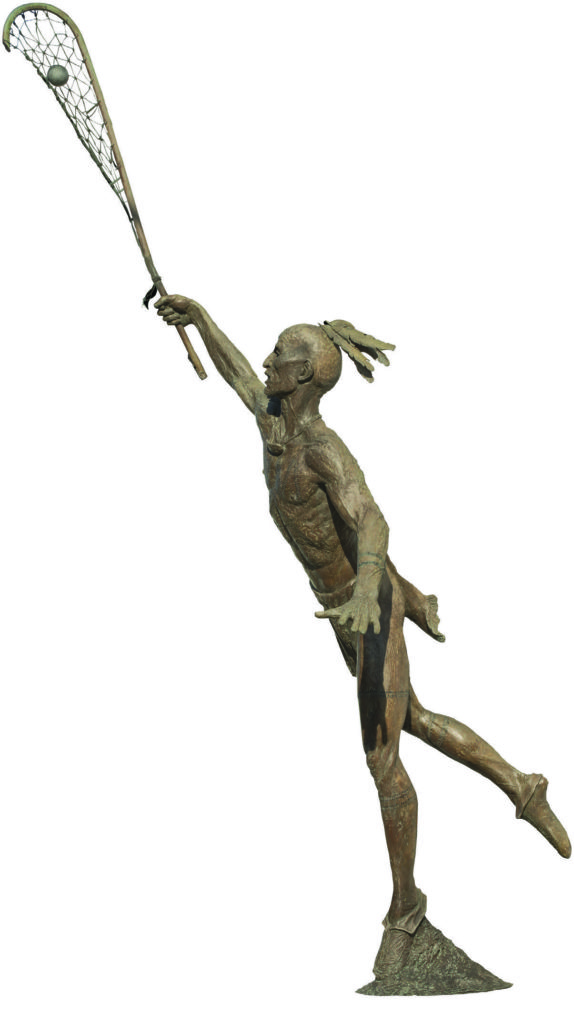 He Who Is Without Equal by Jud Hartmann, 1992. Photographs courtesy of Jud Hartmann Gallery.

Driving into Blue Hill, Maine, it’s hard to miss the eleven-foot-tall bronze statue in front of an otherwise classic New England white clapboard building on Main Street: a glorious Native American figure in full stride raises his lacrosse stick high and cradles a ball in the pocket. Inside the building, the sculptor, Jud Hartmann, holds visitors rapt, reciting from memory such accounts as a 1707 description of the infamous Indian attack on Deerfield, Massachusetts, the subject of another of his bronzes. Linking art and history, literature and a passion for detail, Hartmann has been using his deep research and the time-honored technique of lost-wax bronze casting to tell the stories of the Woodland tribes of the American Northeast for some thirty-five years. We asked him to tell us more about how he came to his art and his subject. He writes:

My favorite movie growing up was Drums Along the Mohawk and I loved N. C. Wyeth’s illustrations in The Last of the Mohicans. After graduating from Hobart College in 1970 with a degree in American history—and no formal art training—I lived for a while on Saint Croix. While experimenting with a chisel on a piece of mahogany one day, I had a reaction so intense I knew I was meant to be a sculptor.

Then, in my mid-thirties, my boyhood interest in the tribes of the Northeast was rekindled when friends asked me to carve an image of Chingachgook, from The Last of the Mohicans, from the trunk of a large dead tree on their property on Lake George. I had recently started working in clay and bronze, so offered to create an image in bronze instead. The result was the piece that launched my series in 1983.

The story of the Woodland tribes is a part of our early history that is well documented but relatively little known. Much of my time is spent studying primary sources by sixteenth-to early nineteenth-century French, English, Dutch, and American writers, as well as the oral histories and traditions of the native people themselves. With a special acknowledgment to the Iroquois, they arguably influenced the birth of the suffragette movement, the League of Nations (and, thus, the United Nations), and even the Constitution of the United States itself. In my work I try to capture some of the complexity and highly evolved nature of their civilizations, their intelligence, their eloquence, and their intuitive wisdom. 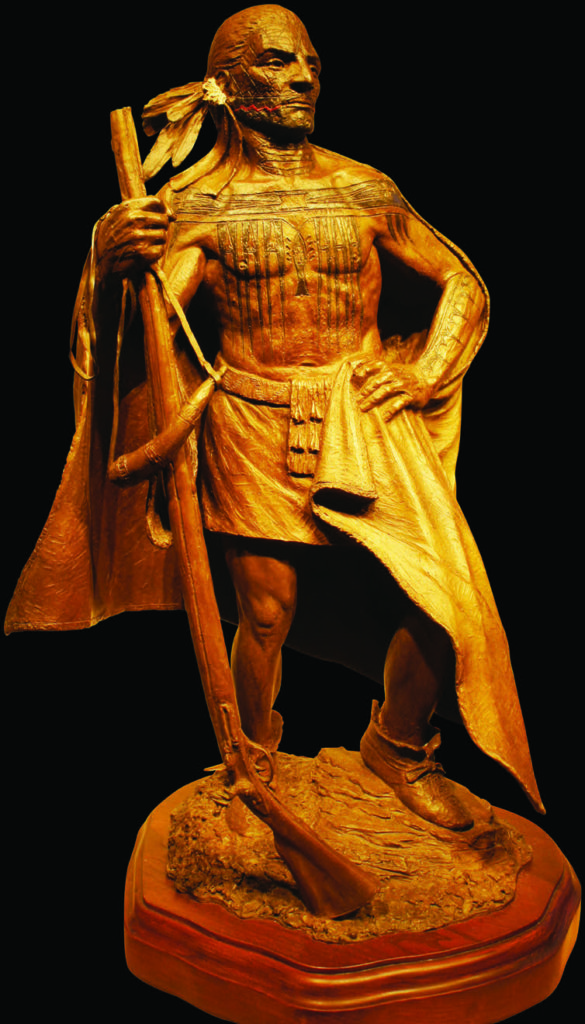 Lacrosse, which I’d played in college, is a significant part of my larger theme. The sport has its origins in a tribal game played by all Eastern Woodlands Native Americans and by some Plains tribes in what is now Canada. Among Native Americans it is still referred to as the “Creator’s Game,” and every tribe has its own mythology about it—the ball that players volley back and forth, for instance, is sometimes said to imitate the sun and moon that moved across the sky back when the gods played. Though rooted in religion, the game was used to resolve conflicts, settle bets, heal the sick, and develop strong, virile men. Today, Native Americans are some of the best players on the planet. The Iroquois Nationals are treated as a separate sovereign national team, and, traveling on their own passports (not Canadian or American), are currently ranked number three in the world in field lacrosse and number two in indoor (box) lacrosse. They are amazing to watch.

Hartmann’s bronzes are in various museum, corporate, and university collec-tions as well as in such public venues as the sports center in Rockville Centre, New York; the National Lacrosse Hall of Fame and Museum in Sparks, Maryland; and, honoring the Cherokee, near an entrance to the “Trail of Tears” in Chattanooga, Tennessee. In addition to Blue Hill, he has a gallery in Grafton, Vermont.