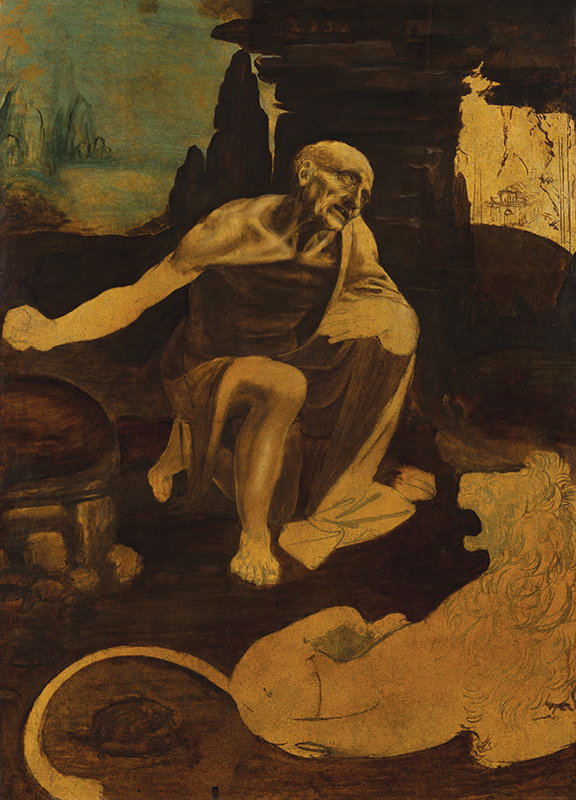 Five hundred years ago this year, Leonardo da Vinci passed away—in the arms of the French king François I, according to legend—and museums around the world have felt called upon to solemnize this important milestone. That, however, is more easily said than done, since the master completed very few paintings in his life, and many of those have disappeared. Although the Metropolitan Museum of Art owns some important drawings by Leonardo, its commemoration of his death will be marked by the display of a single work loaned by the Vatican Pinacoteca, the great Saint Jerome Praying in the Wilderness, a painting that was never completed but that occupied the master for most of his career. Begun sometime around 1482, before he had turned thirty, it continued to be revised for the next forty years, well into his mature years.

Painted in tempera and oils on a walnut panel, the work depicts the eminent fourth- and fifth-century church father in the Syrian desert, pounding his chest with a stone, while a lion curls round him at his feet. This image of an old man emerges from an ancient, rocky background that recalls that of the later Mona Lisa. Even in its unfinished state, it is a triumph of anatomical observation. One can only marvel at the sinewy verisimilitude of the arteries in the neck and the structure of the bones of the chest: clearly Leonardo had already begun by this point his study of anatomy, through the dissection of corpses.

At the same time and for the same reason, this is a hard painting to love. In its incomplete state, it survives in a tawny monotone, and its subject and central figure eschew that spectral beauty that is so conspicuous in most of the master’s paintings. But that very oddity will make Saint Jerome Praying in the Wilderness, one of Leonardo’s less-familiar works, a most welcome arrival in the United States.