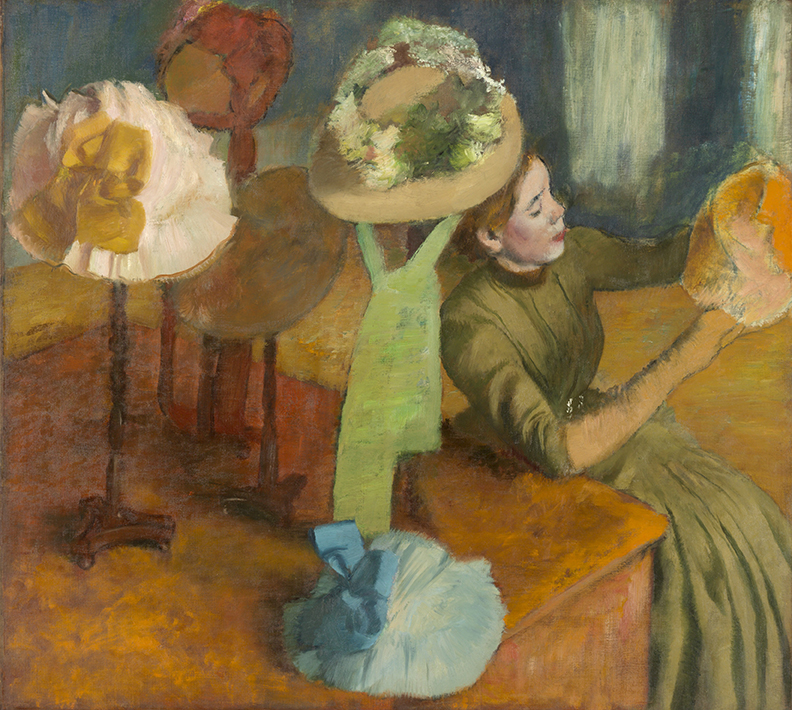 In a letter from around 1890 Edgar Degas described a recent encounter with the fashionable salonnière Madame Geneviève Straus: “I was brought along to a great dressmaker where I helped . . . with the fitting of a most impressive outfit.”1 Degas—the urbane Parisian who rarely, if ever, left his house without a hat—was fascinated by fashion, and especially the milliners of the capital. The hat was a central part of a woman’s overall ensemble. As the fashion writer Arsène Alexandre noted, it was a “dress’s crowning glory, the final touch.”2 Degas is best known for his evocations of dancers, the racetrack, and laundresses, but his depictions of the workers, consumers, and products of the millinery trade were also a key component of his pioneering exploration of Parisian modern life. That topic is examined for the first time in the exhibition Degas, Impressionism, and the Paris Millinery Trade, on view this spring at the Saint Louis Art Museum before traveling to the Legion of Honor, Fine Arts Museums of San Francisco.

Degas’ interest in hats intersected with a golden age in the history of millinery in Paris. There were around a thousand millinery shops in turn-of-the-twentieth-century Paris, with as many as eight thousand workers in the industry.3 The trade was centered on the rue de la Paix in elegant Right Bank Paris just to the north of the Place Vendôme and to the south of the Opéra. Here, haute couture milliners impressed passersby with sophisticated shopfronts like that of Maison Alphonsine (Fig. 3). Degas regularly promenaded admiringly in front of these windows and, as his friend Paul Gauguin noted, “dared to go into ecstasies” before them.4 Milliners such as Caroline Reboux, Madame Virot, and Jeanne Lanvin were creating hats decorated with a richly diverse range of materials: silk, velvet, straw, felt, artificial flowers, ostrich plumage, and, perhaps most bizarrely to a modern viewer, whole bird carcasses (see Fig. 7), often transported from remote climes in South America or Asia.

Degas was intrigued by the artistry and labor of Parisian milliners. He was working at a time when there was considerable debate regarding the low pay and long hours—most notoriously the overnight shift, or veillée—of women who worked in the Parisian garment industry. Many women were forced to supplement their income by turning to prostitution. Although milliners—particularly the juniors in the profession—were not immune to this unfortunate fate, they were also seen as elite workers. For the fashion writer Octave Uzanne, milliners were the “aristocracy of the working women of Paris.”5 They could expect to make higher wages than those in the dressmaking or underwear trades.6 More than any other designers, they were also seen as artists in their own right whose hats were bona fide “creations.”7 Degas himself even made a comparison between the paintings of his friend Berthe Morisot—whose work he admired—and the hats created by milliners.8 He certainly highlighted the idea of the milliner as artist. In The Millinery Shop (Fig. 1), his largest painting on the millinery theme, he shows a young woman at work on a hat—a hat pin perhaps pursed between her lips—and emphasizes her intense concentration. In later images, such as the Saint Louis Art Museum’s Milliners (Fig. 5), his subjects become increasingly abstract, perhaps a result of his increasing blindness as well as his fascination with photographic effects and the work of Gauguin. Yet, his attention to the meditated introspection of the milliner remains a constant. Here, he hides the face of the woman, showing her with bowed head as she focuses on her trimming of a broad-brimmed straw hat.

Degas was equally fascinated by those who bought hats. He was working at a time that saw a remarkable expansion of consumer culture in Paris, perhaps the first truly modern capital city. He witnessed the opening of some of the world’s first department stores such as Au Bon Marché (in 1852) and Au Printemps (in 1865)—both of which still exist today and which transformed the ways in which commodities were bought and sold. At a time of increasing interest in women’s rights, shopping now became a polemical means for women to assert their independence. Degas’ images show female customers as thoughtful and diligent as they explore various hat options, a stark contrast to the view of women shoppers as wild spenders and destroyers of households that was often promoted in the conservative popular press. Degas’ empathetic imagery was surely inspired by his own familiarity with shopping trips through his associations with Geneviève Straus and, perhaps most notably, his close friend Mary Cassatt. He admired Cassatt’s strong-willed personality. He adored, too, her copper-colored hair, and she often served as his model in such works as At the Milliner’s (Fig. 4). In later paintings, Degas’ imagery becomes increasingly modern, even to the extent that the customer’s face is completely abstracted in her mirror reflection (Fig. 2).

Degas was intrigued not only by the customers but also by those who served them. “He professes the deepest admiration,” wrote Morisot, “for the very human quality of young shopgirls.”9 When asked why he was so fascinated by fitting sessions, Degas responded in a characteristically whimsical boutade that he was drawn to the “red hands of the little girl who holds the pins.”10 His view of one such session (Fig. 2) supports this quip: here the hands of the assistant hover in space in a highly stylized and cropped pose—surely informed by his use of a hand model.

Beyond his fascination with milliners and their customers, Degas was of course deeply drawn to hats themselves. Some of these are remarkable objects, as in a luminous blue hat trimmed with the iridescent taxidermied body of an African starling (Fig. 7). Indeed, in 1911 the Parisian hat industry was said, somewhat hyperbolically, to be the cause of the deaths of up to 300 million birds a year.11 Thousands of tons of ostrich plumes were also imported to Europe from Africa in an enormous global trade. By the early twentieth century hats had become extravagant in size, often close to two feet wide, as in a straw hat by the Guillard Sisters trimmed with ostrich plumes, silk lace, and cotton flowers and leaves (Fig. 6). The size of such hats was regularly caricatured in the press: one comical image shows a trottin (or errand girl) delivering a hat that is considerably larger than she is (Fig. 8). Degas understood the complex textures of hats and sought to find painterly and pastel equivalents to mimic their materiality. In an 1882 pastel (Fig. 9), he meticulously rendered the individual barbs of serpentine ostrich plumes, now dyed with a range of newly discovered aniline colors. He evoked, too, the brittleness of straw and the soft delicacy of silk artificial flowers. Degas produced his last millinery work, the pastel At the Milliner’s (Fig. 10) sometime between 1905 and 1910 (he would give up work in 1912 when his studio was demolished by developers). In this remarkably abstract image—were the figures to be removed, the composition would be reduced to three bands of color (table, floor, and wall)—Degas treated curled ostrich plumes on the table in a panoply of colors: salmon pink, blue, orange, mauve, and red.

The abstraction of Degas’ late millinery images is a long way from his earlier, far more naturalistic renderings. Over approximately thirty-five years, from the mid-1870s until around 1910, he had treated the millinery trade in a body of richly evocative images. These provide much insight into his broader career, highlighting his empathetic, if complex, attitude toward the rendering of women as well as his fascination with themes of commerce. His cropped compositions and bold use of color ensure that they are among the most formally inventive works of his whole output. Few milliners survive in Paris today—the Parisian Pages Jaunes lists forty-one—but Degas’ images transport the viewer back to a lost world of elegant fashion while also hinting, although never too loudly or explicitly, at the social and political complexities of that world.

SIMON KELLY is the curator of modern and contemporary art at the Saint Louis Art Museum.