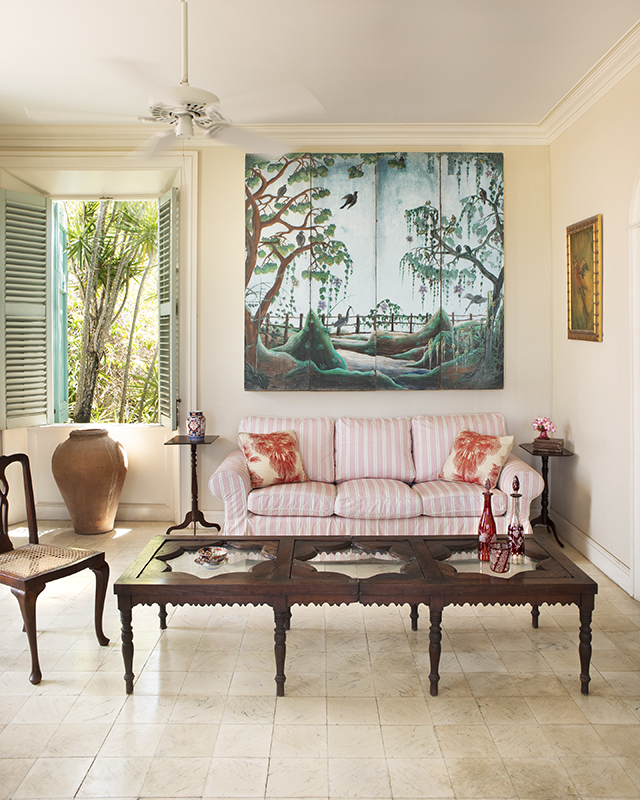 Of the five European countries—Spain, England, the Netherlands, France, and Denmark—that colonized the Caribbean, the Danes were the last to arrive, settling in Saint Thomas in 1672, expanding to Saint John in 1683, and finally purchasing Saint Croix, “Island of the Holy Cross,” from the French in 1733. The three islands were owned by Denmark until sold to the United States in 1917 and are now known as the United States Virgin Islands.1

Denmark was a relatively small country compared to the other more powerful colonizing European nations, but through persistence and resourceful enterprise the Danish colonies developed a rich plantation economy. The three Danish islands grew slowly in the beginning, primarily exporting  tropical hardwoods and cultivating cotton and indigo, but soon shifted to sugarcane. The growth of the sugar plantations and rise of the Danish West Indian plantocracy was typical of the planter-class development in all the Caribbean sugar islands. The West Indian sugar trade sustained European empires, caused wars, and fostered the tragically brutal slave trade.

Due to the tremendous economic significance of sugar, plantation great houses and grand urban town houses became the islands’ chief architectural focus. Reflecting the highest concentration of wealth and European influence, these lavish residences served as testimonial to, and evidence of, the success of the planters, merchants, and highest military and government officials.

The neoclassical style was in fashion in Denmark from about 1780 to 1840, and this was the style the Danes exported to their West Indian holdings during the islands’ height of prosperity in the first half of the nineteenth century. Saint Croix’s two principal towns, Christiansted and Frederiksted, and Saint Thomas’s, Charlotte Amalie, are famous for their distinctive colonial architecture, which blends the Danish neoclassical with design elements from other European countries, adapted for the islands’ tropical climate.

Architectural historian William Chapman gives this general description of the domestic architecture: “Despite variations in style, building materials, and dates of construction, the urban dwellings of the Virgin Islands shared a number of significant features. . . . Nearly all were blocklike freestanding structures, usually surmounted by hipped or clipped-gable (hip-on-gable) roofs, the latter more common on eighteenth-century buildings…. Ground floors were generally utilitarian spaces, serving as warehouses, workshops, stores, and other businesses. Residential areas were located on the second floors and occasionally extended to the attic spaces above.”2

The mid-eighteenth-century Christiansted town house En Nordgade (One North Street) is a perfect example of Danish colonial West Indian urban architecture. The fashionable 1760 town house is located two blocks northwest of 7 and 8 King Street, where Alexander Hamilton, before moving to America, clerked for the import-export firm of Nicholas Cruger during the late 1760s and early 1770s. One North Street’s owner, Cynthia Tyler, an antiquarian in the true sense of the word, purchased the property with her late husband, George, soon after Hurricane Hugo devastated much of the island in 1989.  The restored and partially reconstructed three-story house overlooks Christiansted harbor, and is situated atop one of the town’s highest hills to take advantage of the prevailing southeastern trade winds. An elevated basement serves as the ground floor and is built of yellow brick, brought to the island as ships’ ballast from Denmark, as well as locally obtained limestone and coral stone taken from the island’s surrounding reefs. The ground floor contains the original cistern used to collect and supply rainwater to the house and is still in use. During the late eighteenth century, the ground floor housed a forge that serviced horses and carriages kept in a stable that occupied the rear courtyard. A double staircase rises to the second-story main floor, which is based on a modified tripartite plan. The mahogany double doors lead to a spacious central hallway lined with six substantial open arches, each of which gives access to a voluminous high-ceilinged room on either side of the hallway. The carefully unenclosed main floor is perfectly planned to facilitate abundant natural light and airflow in Saint Croix’s hot, humid climate. The third floor consists of an unusually large bedroom, with adjoining alcove, and an office with balcony overlooking the rear courtyard. Today the entire house is filled with a preeminent collection of island-crafted mahogany antique furniture.

Danish island plantocracy was demanding when it came to furnishing their homes, as Danish author Tyge Hvass explains in Møbler fra Dansk Vestindien [Furniture from the Danish West Indies]: “Large, handsome pieces of furniture adorned the West Indian rooms; but it was not just the furniture that gave lustre to the handsome rooms; also light fixtures, table-linen, glassware, and silver speak of the refined and cultured life the planters must have led on their large plantations.”3

Colonial Danish West Indian mahogany furniture is considered the most classically distinctive and stylish of all Caribbean island-made furniture. The majority of Danish island furniture is crafted from West Indian mahogany (Swietenia mahogani), an exotic hardwood found in the Virgin Islands, and for the past three hundred years regarded as the world’s finest, most versatile, and luxurious wood for making furniture. The few surviving examples of the earliest island-made furniture date from the mid- to late eighteenth century, and are generally simple and plain, owing to the rudimentary skills of the first furniture makers. The preponderance of existing colonial West Indian furniture dates from the second quarter to the last quarter of the nineteenth century and displays a gradual design change from the neoclassical to Victorian styles. Imported European and North American Empire styles during this period influenced island craftsmen to create classical forms with geometric architectural design features that eventually became more curvilinear expressions of form, ornamented with motifs from nature with ornamented elements and African–West Indian decorative elements.

The majority of Caribbean enslaved labor was put to use within the islands’ agricultural sector, but as Christian Georg Andreas Oldendorp (1721–1787) wrote in 1769, there were many skilled enslaved Africans who did “not lack the aptitude for these skills and that they often bring them to that degree of perfection, which has been established by white professionals. Thus, masons, carpenters, cabinet-makers, coopers, blacksmiths, tailors, shoemakers and barbers are to be found among them.”4

Since the majority of island furniture makers were anonymous, enslaved, or illiterate few records exist for cabinetmaking workshops during the colonial era. It wasn’t until the last quarter of the eighteenth century that evidence begins to reveal a number of enslaved Africans becoming free tradesmen, skilled in woodturning, carving, joining, and carpentry. The African-West Indian furniture craftsmen first took inspiration from the imported European and North American models, and with time their work became progressively less an exact copy of the imported models and increasingly more interpretative.

The island mahogany armoire was one of the most prevalent and prestigious expressions of furniture forms throughout the Caribbean, as armoires and smaller versions, known as parlor presses, were the preferred replacements of chests of drawers because their roomier and airy interiors were less susceptible to tropical mildew, mold, and insects. As one nineteenth-century observer noted: “A fine mahogany press is the pride of every Creole beauty.”5

One North Street’s mammoth four-door mahogany armoire is an exceptionally rare example of an early nineteenth-century Danish West Indian neoclassical style armoire. Typical of the plain, measured, symmetrical style of Danish island-crafted case furniture of the period, this armoire is one of the few surviving four-door examples. Like other large armoires, the piece was designed to be disassembled for manageable transportation and can be dismantled into framed panels, cornice, base, doors, and rear panels. These sizable utilitarian storage pieces were particularly popular for the capacious high-ceilinged town houses and plantation great houses of the plantocracy.

In the same dining area is an impressive majestic Jamaican sideboard, a pair of Saint Croix–made mahogany game tables, an early nineteenth-century dining table that comfortably seats twelve with a dozen island-crafted chairs, and an elaborate cup (or cupping) table—a kind of small sideboard—all made of island mahogany.

The top-floor bedroom is also filled with island-made mahogany furniture, most of it crafted on Saint Croix. The massive turned and carved tall-post bedstead has boldly proportioned posts, with an extended headboard and bedrails to accommodate contemporary bedding. The mahogany press, hat stand, hand-caned recamier, and bedside washstand are also island-crafted pieces.

Like most colonial island cookhouses the kitchen is located separately but adjacent to the house—primarily as a fire-prevention measure, but also to keep cooking smells and heat away.

The craftsmanship tradition prevailed far longer in West Indian furniture making than in North America and Europe, which had largely transitioned to machine-made production by the end of the nineteenth century. By the mid-twentieth century the United States Virgin Islands’ furniture-making tradition had also died out. One North Street’s remarkable collection remains a vital part of Saint Croix’s material culture—testimony to its heritage and a tribute to West Indian craftsmen’s versatility, skill, and innovative sense of design.

MICHAEL CONNORS, who received his PhD from New York University, has written ten books about the Caribbean’s historically significant architecture and decorative arts, and is responsible for bringing colonial West Indian furniture forward as an independent collecting field.