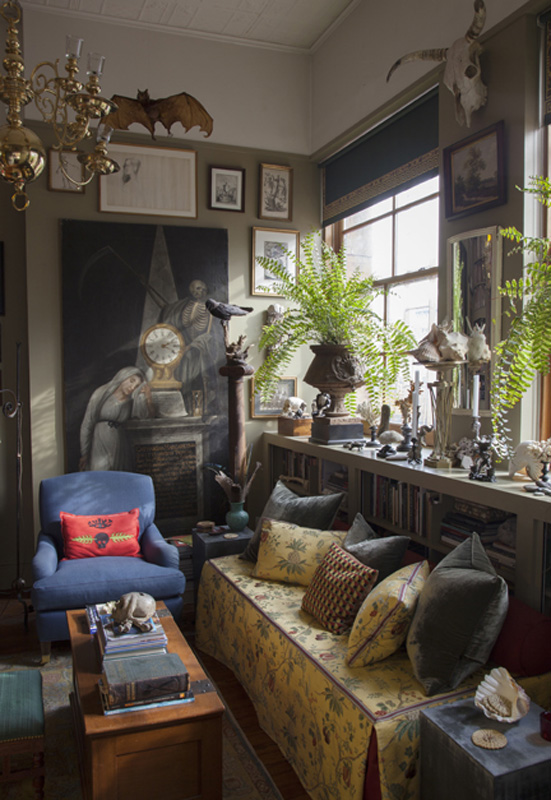 The most surprising interior in London is Sir John Soane’s Museum. The sheer density of paintings, sculpture, furniture, architectural fragments and models, Greco-Roman marbles, and much more appears largely as it did when the renowned early nineteenth-century architect lived there, arranging and rearranging his art, artifacts, and antiquities. What elevates the profusion from an eccentric jumble to a splendid, startlingly original mosaic is Soane’s ingenious handling of light and space.

The same sure-handed mastery is at work on the top floor of a former warehouse in New York’s SoHo-Cast Iron Historic District. Here, decorator and antiquarian Thomas Jayne, together with his partner, Richmond Ellis, have created their own cabinet of curiosities–a collection of beautiful objects, ancient and modern, that relate visually in abstract ways. “Our floor was once devoted to light manufacturing–perhaps hats or textiles,” says Jayne, who with Ellis also maintains an apartment in New Orleans. “I like to think they made all sorts of things we might collect–or at least wear to Mardi Gras.”

Sparked by Soane’s use of yellow glass skylights, Jayne has lined the loft’s principal skylight with yellow mirror, refracting the natural light to brighten industrial-gray days, burnish the shapes and surfaces of furnishings, and flatter every skin tone. In addition to the skylights at Soane’s, he counts as inspiration the yellow skylights at Frederic Edwin Church’s Olana in Hudson, New York.

The only interior designer to have been honored with awards from both the Institute of Classical Architecture and Art and the Preservation League of New York State, Jayne is the principal at Jayne Design Studio, which will celebrate its twenty-fifth anniversary this spring. His fascination with the dynamic between old and new began at an early age: a native Californian, he was rocked in the cradle of modernism, but grew up with a pleasing mix of family furniture in different styles. He’s quick to point out that people have always lived with pieces that reflect diverse regions and cultures. “Few of us live in rooms where everything is brand new,” he writes in American Decoration: A Sense of Place, his second book. “I pay attention to old objects, in part for their narrative history–where they are from, who owned them as relics or heirlooms–and also for inspiration in making new things. How the shapes of furnishings in a room relate to one another is paramount, especially since we tend to actively mix styles and periods.”

The word that best describes Thomas is “historicity,” says Steven Miller, executive director of Boscobel House and Gardens in Garrison, New York. Miller and Jayne both attended the Historic Deerfield Summer Fellowship Program in western Massachusetts in their undergraduate days. “Thomas came along about ten or so years after me,” Miller says, “and then he was an intern of mine at the Museum of the City of New York. The Deerfield program is of value to those considering careers in museums, the arts, design, education, or history. To me, Thomas embodies all of these pursuits at the highest level.”

Jayne describes what he does as “collage decoration,” but his calm yet visually complex interiors for people with contemporary lives inspire a renewed appreciation for tradition without evoking the static character of historically correct period rooms or formulaic pastiches of the past. For young families and established collectors alike, he draws on a singular background that includes achieving the rank of Eagle Scout; studies in architecture and art history at the University of Oregon; a stint in Christie’s Estates and Appraisal Department; and graduate fellowships at Winterthur and the Metropolitan Museum of Art.

Instead of following a curatorial path, however, Jayne started his career at the legendary Parish-Hadley decorating firm. It’s no surprise, really, that an architecture student felt at home there, for among Sister Parish and Albert Hadley’s core principles was that good interior decoration begins with good architecture and a rich design vocabulary. Through his work at Parish-Hadley and Associates and with Kevin McNamara, another influential New York decorator, Jayne’s aesthetic has actually been influenced by connections to four generations of decorators, starting with Elsie de Wolfe. “When Albert Hadley moved to New York, he sought out de Wolfe, and they formed a strong association,” Jayne says by way of background. “Then Albert and Kevin worked with Eleanor Brown at McMillan, and later Kevin worked at Parish-Hadley. I worked for both men, in sort of a decorator/apostolic succession of received wisdom. Importantly, these key figures of American design all called themselves decorators, so I am unapologetic in calling myself a decorator and carrying on a tradition that is now more than a century old. Besides, the use of the title today, instead of ‘interior designer,’ is slightly subversive and counter-trend, and I like that, too.”

Jayne’s projects range from city apartments and coastal retreats to a plantation house in South Carolina, a lodge on a Montana ranch, a lighthouse in Oyster Bay, the President’s House at Yale University, rooms at the Shelburne Museum and at Winterthur, and an important English country house with rooms by James Wyatt. “I think that when a room is well-decorated, it can last a long time,” he observes. “That’s a point of pride in all my decorations–if you go back twenty years later and it still looks good, you’ve succeeded.”

Like his other work, the SoHo loft reflects its region. “It’s an archetypal New York loft, four-square and linear, and I don’t think it could be anywhere else,” Jayne says. “There’s the New York City grid outside, and where else would we be willing to climb five flights of stairs for light and space?” (There is no elevator, and visitors may wonder if they’ve fulfilled the requirements for a hiking merit badge.) “It’s also easy to collect here,” Jayne continues. “We have incredible access to dealers, antiques shows, and flea markets. Given what we collect, you know you’re in a loft-it doesn’t look like a country house.”

The loft is very much a collaboration between the two men, Jayne, the collector, and Ellis, the arranger. That said, Ellis, who is a food stylist and culinary historian, has assembled one of the country’s most important collections of early American cookbooks (at the heart of the roughly five thousand-volume library is one of the earliest known copies of American Cookery… by Amelia Simmons, published in 1796 and the first cookbook by an American author to be printed in the United States). “We had to buy a loft because we couldn’t fit the books in a regular apartment, one we could afford,” says Jayne, whose own extensive library dedicated to architecture and the allied arts resides at his office on East Twelfth Street. “Bookcases give the space architecture. They help frame four discrete areas, but you can see from one end to the other–an enfilade.” Carving out those discrete areas prevents objects such as small bronzes, a Dutch chandelier, and white plaster busts of Washington, Jefferson, Franklin, and Lafayette from getting lost. “The loft is not unlike how a museum is organized, in galleries, but it doesn’t feel like a museum. It’s simply a mixture of old and new things arranged comfortably and in a contemporary way,” Jayne explains. “I always tell people that they should never be afraid of using old things. Living with antiques doesn’t mean discomfort.”

The bookcase “walls” stop a few feet short of the fourteen-foot ceiling to preserve the spare, airy feeling of an industrial space, and for the same reason, most of the original walls are painted white and pipes and ductwork are left exposed. At the far end, tall contemporary doors, also sheathed in yellow mirror (which is actually plexiglass) open into a deliberately small study-cum-guestroom, or what Jayne and Ellis refer to, in a nod to Winterthur, as the “Visiting Scholars Residence.” An overnight guest will notice that the other side of the doors is mirrored too, but in shocking pink, “for fun.” At the opposite end of the loft, yellow mirror also lines the wall that separates the dining area from the bedroom.

Jayne’s primary requirement–great light–is met by the loft’s skylights and southern, eastern, and western exposures. Beautiful fabrics and comfort are also priorities. “He has an unfailing eye for just the right pattern and color, as attested to by the fabrics and wallpapers he uses in all the homes he designs,” says Amelia Peck of the Metropolitan Museum of Art. “As a textile curator, I appreciate the eclectic blend of upholstery fabric and rugs that Thomas uses.” In the living area, an oversize custom-made sofa (Jayne is six feet, seven inches tall), club chairs, and a large, sculptural pair of eighteenth-century Chinese root chairs cushioned in chartreuse silk take their color cues from a lustrous seventeenth-century Isfahan carpet. It is the focal point of the room. “We didn’t have a place to spread it out completely until we moved here,” Ellis says. “It’s had a lot of rehab, as old carpets do, and that’s part of the charm–a new edge, faded color, worn-out spots. Ours is never vacuumed; we use a carpet sweeper on it. That’s very Thomas Jayne.” Though known for his deft balance of the historical and the au courant, Jayne is also reliably ahead of trend, as the Isfahan bears out: “people have finally come to appreciate these carpets,” Ellis remarks. “Now they’re even weaving new ones to look like them.”

Jayne and Ellis (who was also schooled in architecture) share a virtually innate visual precision leavened with a quirky sense of humor. “I love the plaster busts of Thomas Jefferson and the marquis de Lafayette on modernist pedestals,” Peck says. “And how can you forget the charmingly macabre skull collection in the front room–or the stuffed raven?” The whole idea of memento mori such as these has always fascinated Ellis. “They’ve been with us as long as art’s been with us, as remembrances. They’re an unsung art form. And so sculptural. Tom’s very much interested in figural objects,” he says. “Skeletons and taxidermy–almost no one was collecting this stuff when we started,” Jayne adds, noting a few exceptions: friends Tim Knox, the former curator of Soane’s Museum and now the director of the Fitzwilliam Museum at Cambridge, Gowan, in London; and, in New York, photographer Robert Mapplethorpe. “People said, ‘You’ve got taxidermy in your apartment? You’ve got to be kidding.’ Dealers were giving it away. And now it’s had a big ascent and probable descent, but I’m not changing it.”

Jayne is just as loyal to his great-grandparents’ rococo revival bed, in which he’s slept since he was a teenager. Like everything else in the loft, it is an expression of his abiding interest in narrative, in provenance. And what can he teach today’s collectors? One important lesson is that it’s not always about the quality, even though he has many objects that are the epitome of type. “Our antiques are inherited, or we buy them for use,” he says. “Also, what about folk art? Appearance or a family story trumps the usual signifiers. Something like a handsome rustic quilt can be, well, not really art, but on a high plane aesthetically. But an old object still has to look good, it has to appeal to the contemporary eye. Rick always says that just because something is historic doesn’t make it pretty, or in good taste. Beauty prevails.”

JANE LEAR, a former editor at Antiques, is a writer who specializes in food and travel.