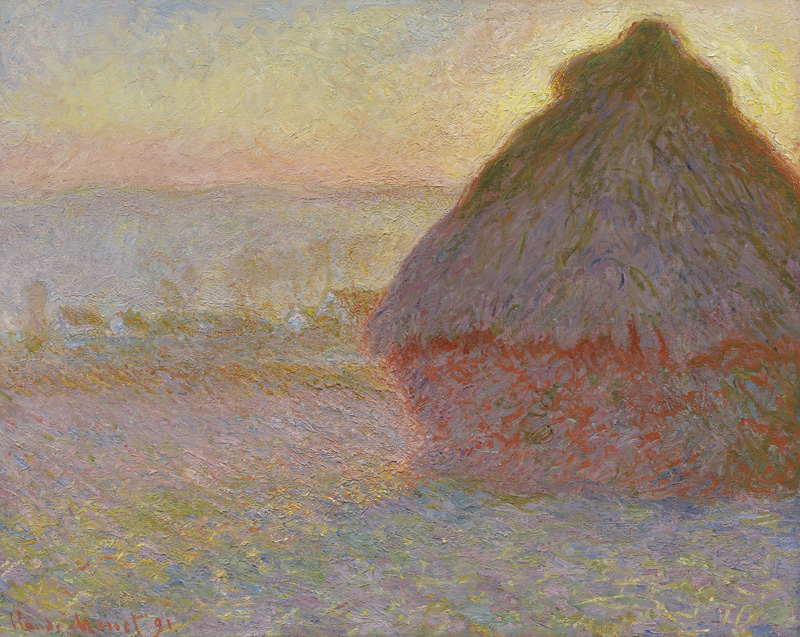 The presence of the artwork of Claude Monet has seemed nearly ubiquitous lately in the world of high culture. Last year the Denver Art Museum presented the massive Claude Monet: The Truth of Nature (co-organized with the Museum Barberini in Potsdam, Germany) while several smaller shows made their way around the country, including Monet’s Waterloo Bridge: Vision and Process, which originated at the Memorial Art Gallery of the University of Rochester in 2018. Now, with two exhibitions originally scheduled to open this spring—Monet and Boston: Lasting Impression and Monet and Chicago—the Museum of Fine Arts, Boston and the Art Institute of Chicago have added their voices to the discussion, with examinations of the way their respective cities and collectors embraced the artist years before he earned the imprimatur of the French establishment.

The American market for Monet—and impressionism generally—was ignited by dealer Paul Durand-Ruel, who organized an exhibition at New York’s American Art Galleries in 1886 and opened his own Manhattan outpost the following year. In 1888 he loaned twenty canvases for a show at Chicago’s Thurber’s Art Galleries. Three years later he sent pieces by Monet, Camille Pissarro, and Alfred Sisley to Chase’s Gallery in Boston.

Boston and Chicago collectors alike were quick to appreciate the work—and make a point of sharing it. In 1891 Anna Perkins Rogers loaned two works to the Boston MFA, Snow at Argenteuil and Fisherman’s Cottage on the Cliffs at Varengeville. The following year, the arts-centric St. Botolph’s Club was able to present a solo show drawn entirely from local collections. “Boston was an important center for collecting and exhibiting the artist’s work in his own lifetime and for grappling with what this new art was all about with lectures and articles appearing here on impressionism in general and Monet in particular,” says Katie Hanson, associate curator for European art at the Museum of Fine Arts, Boston. A month after Monet’s death in December 1926, the MFA mounted a memorial exhibition that included twenty-one works owned by the museum.

By the end of 1892, Chicago’s Bertha and Potter Palmer (who had met Monet in France that spring), owned nearly fifty of the artist’s paintings. “The Palmers were buying most of their works between 1891 and 1893, completely galvanized by the idea of all the people coming to Chicago for the fair,” says Gloria Groom, who chairs the department of European painting and sculpture at the Art Institute.

In 1895 the Art Institute gave the artist his first solo museum show in the United States. In 1903 it became the first museum in the country to purchase a Monet—Bad Weather, Pourville, painted in 1896. “Monet was not fully accepted in France until the first decade of the twentieth century,” Groom says. “It was different in this country. Chicago was a young city, and less tradition-bound, unlike Paris, where you had the Academy and the Louvre showing people what art should be.”

The MFA presented its first all-Monet exhibition in 1911, and bought its first canvas—an image of Rouen Cathedral—in 1924. Today, thanks primarily to bequests, the two institutions are among the largest repositories of the artist’s work outside France. In displaying the full breadth of their holdings, the museums rehearse the trajectory of the artist’s reputation as it expanded from drawing room and commercial gallery to institutional acceptance and public appreciation. (The MFA show includes a recently acquired caricature drawing made by Monet when he was a teenager; the Chicago exhibition includes a promised gift—Boats Lying at Low Tide at Fécamp of 1881—which will bring the museum’s roster of Monet paintings to thirty-four.)

Naturally, despite the relative swiftness with which the artist’s work was acquired, not everyone was a fan. When Chicago’s Union League Club purchased Apple Trees in Blossom, the club’s president is reported to have scoffed, “Who would pay five hundred dollars for that blob of paint?” But time has more clearly favored the feelings of one Boston gentleman, who, after viewing the artist’s work, took in the play of light and color as he strolled in the city’s Public Garden and exclaimed, “My God, it’s true!”