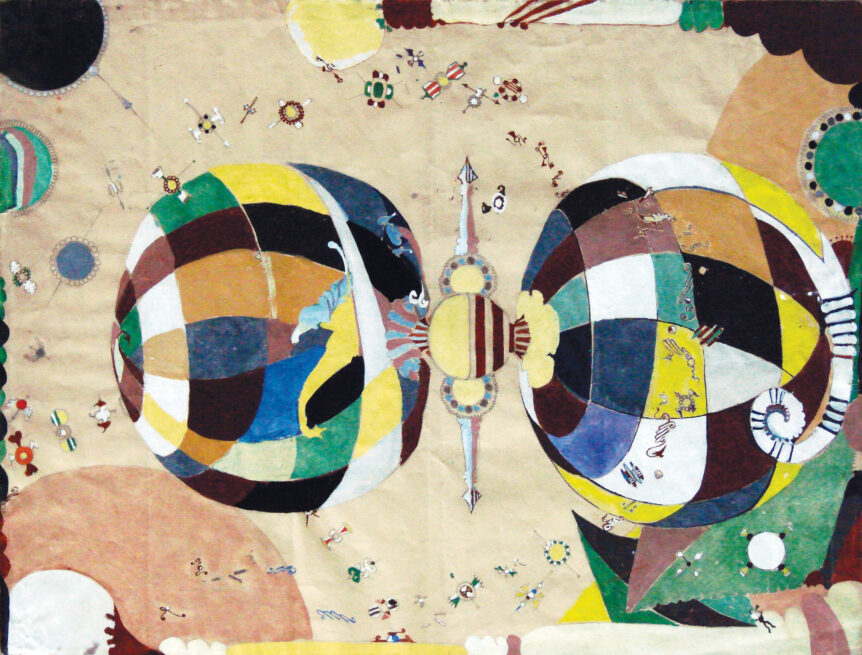 “Wherein lies the totality of our being, in painting or in science?” —Eugen Gabritschevsky, 1948

Eugen Gabritschevsky was born in Moscow, in December of 1893, into a bourgeois, cultured, and highly educated family. His father, Georg Norbert Gabritschevsky, was a famous bacteriologist, who among other things, helped develop a vaccine for scarlet fever and new methods of medical sterilization. Elen, his wife, was friends with important writers such as Leo Tolstoy and artists, including Auguste Rodin, who sculpted a bust of Georg in marble. (The artwork is in the collection of A. S. Pushkin State Museum). Growing up, the young Eugen had the world at his fingertips, and was taught by an international group of foreign language, music, dance, painting, philosophy, and law tutors. From all accounts he was a sensitive and imaginative child who showed an early predilection for observing nature, particularly insects. During prolonged stays at his grandfather’s large countryside estate, he spent his days in the fields collecting specimens and conducting experiments. He spent so much time with insects that he developed a talent for mimicking or personifying their behaviors.

Gabritschevsky would indeed become a successful entomologist, and a geneticist. He was awarded a grant to further his postdoctoral research at Columbia University, from 1925 to 1927 (Fig. 2), and he later worked at the Pasteur Institute in Paris. He published important articles in major scientific journals before succumbing to a series of mental breakdowns, starting in 1929. Gabritschevsky was institutionalized for good at the Eglfing-Haar Psychiatric Hospital near Munich in 1931. Over the next five decades, until his death in 1979, he produced a large corpus of paintings that caught the attention of his doctors and, eventually, a number of art world figures and collectors. That work is the subject of Eugen Gabritschevsky: Theater of the Imperceptible, an exhibition now on view at the American Folk Art Museum in New York.

It is difficult to categorize Gabritschevsky’s work as “outsider art” or art brut for two reasons: first, he was, for a good part of his life, not a cultural outsider at all, but rather a successful scientist, whose earlier scientific drawings seem to have much in common with his post-breakdown work. As Annie Le Brun succinctly puts it in her essay for the catalogue that accompanies the exhibition: “Contrary to their situation, it is as if with Gabritschevsky, there was no before and after.”1 For this reason, the show’s co-organizer in New York City, Valérie Rousseau, curator of self-taught art and art brut at the American Folk Art Museum, has included examples of Gabritschevsky’s pre-breakdown illustrations, some of them created during his New York stay (Fig. 3). Likewise, given his extensive education growing up in pre-revolutionary Russia, and the time he spent in Paris in the 1920s, it is likely that before his institutionalization Gabritschevsky was aware of avant-garde movements such as Russia’s Jack of Diamonds—a Moscow counterpart to the fauvists of Paris—and French surrealism. Which is to say, in his later works we see not only the continuation of his training in scientific illustration, but also the possible influence of artists such as Natalia Goncharova and Max Ernst. In the case of the latter, Gabritschevsky’s work seems to echo certain visual themes and techniques, such as rubbing (frottage) (Fig. 11), the use of a sponge to apply paint (tamponnage), or scratching (grattage) (Fig. 5).

Secondly, Gabritschevsky’s work is hard to classify because he changed his painting style throughout his career. In Le Brun’s words: “there is Gabritschevsky’s extreme variety of work, which makes it hard to compare to the obsessive iterations of ‘schizophrenic artists,’ also presented by [Hans] Prinzhorn (author of landmark study, Artistry of the Mentally Ill, 1922), as well as later within the perspective of art brut. Whereas [artists] Adolf Wölfli and Aloïse Corbaz seemed to have been compelled all their life to follow the one and only path that enabled them to expose themselves in their inner darkness, with Gabritschevsky, everything suggests that the stunning diversity of what he produced over a period of more than thirty years was the key to his survival, like an escape from unstable equilibrium and the brink of disaster.”2

Perhaps Gabritschevsky’s dedication to constant change is not so surprising. He was, after all, fascinated by the ways insects mutate, evolve, stray from mimesis, and preserve their uniqueness over time. While some of his works resemble scientific observations of protozoa through a microscope (Fig. 6), others display more regulated shapes and patterns (Fig. 1), or look like Rorschach ink blots (Fig. 7), or like ghostly visages that belong in a Tim Burton film (Fig. 8). Some are fantastical landscapes featuring sphinxes and other mythical creatures (Fig. 9), while others bring to mind mottled patches inspired by Édouard Vuillard’s muted domestic interiors (Fig. 10).

Jean Dubuffet, the French artist and writer credited with “discovering” art brut and coining the term, was dubious when he first saw Gabritschevsky’s work. As Sarah Lombardi and Pascale Jeanneret explain in their catalogue contribution, for Dubuffet, Gabritschevsky’s more traditional black-and-white charcoal drawings from 1921 to 1927 were not far enough “removed in style from classical European art [the art in museums]” to be considered art brut (Fig. 12). Dubuffet changed his mind when he saw Gabritschevsky’s more nebulous images from the late 1940s and early ’50s created using gouache applied with a sponge (Figs. 4, 5).

Although the American Folk Art Museum’s show is billed as the first in-depth look at Gabritschevsky’s work for New Yorkers, this is not the first time it has had a presence in the United States. In 1951, when Dubuffet dissolved his first Company of Art Brut in Paris, and brought his collection to New York to be housed at Alfonso Ossorio’s mansion known as the Creeks in East Hampton, New York, he included three of Gabritschevsky’s paintings. In addition, from October 24 to November 11, 1961, the Daniel Cordier & Michel Warren Gallery organized a solo show on Gabritschevsky. The artist’s work, it can be argued, is partly responsible for Dubuffet’s subsequent establishment of a second Company of Art Brut in 1962. In the interim, Dubuffet had relocated to Vence in southern France, and in 1959 met Alphonse Chave, a gallery owner with an interest in outsider art. His interest, in turn, rekindled Dubuffet’s. The first “brut” artist he encouraged Chave to buy and show was Gabritschevsky. Dubuffet’s decadelong hiatus from art brut had done nothing to diminish his profound admiration for Gabritschevsky. Later, Gabritschevsky’s work was featured in an issue of Cahier de l’Art Brut (#16), and he was given a one-man exhibition at the Collection de l’Art Brut in Lausanne, Switzerland, in 1987. That museum’s permanent collection includes eighty-seven of his works today.

The American Folk Art Museum’s encompassing display of works from every period of Gabritschevsky’s life will allow audiences to see him from a broad perspective. As a result, museumgoers are likely to take seriously a plea that Georg Gabritschevsky—Eugen’s older brother and occasional caretaker—made to Dubuffet: “I would not like [. . .] my brother to be classified under the heading of the demented. In spite of what has happened, my brother has kept a singularly lucid mind. And it is through his work that he recovers the serenity of soul of which life has robbed him.”3

“A vibrant psyche” A chat with curator Valérie Rousseau

Kent Minturn: Why, in your opinion, has Gabritschevsky’s life and work been overlooked by American audiences?

Valérie Rousseau: He is atypical of the art brut realm—if only due to the significant aesthetic variations of his oeuvre, his advanced education, notably in the arts (traditions from which he proved to be obviously freed), and his scientific background—so Gabritschevsky has not circulated as actively and consistently in art brut’s networks during the last three decades. This explains, in part, why he stayed relatively unknown. Gabritschevsky’s oeuvre exemplifies a timely change of perspective in an art field that gets more and more specialized, as it forces the revision of historical assumptions, extends knowledge on particular artists, and situates such contributions within a global visual culture. I also believe that Gabritschevsky’s imaginative, alternate universe connects us to the present in a very complex way, addressing today’s concerns in genetics, biology, and psychology.

KM: In the extensive research you conducted on Gabritschevsky, what did you find that surprised you the most?

VR: That his art displays a perfect harmony with his scientific mind-set: it is constantly engaged in a practice, which implies experiments; it reflects observational skills, a vibrant psyche, and an open mind that extols the virtues of the unforeseen. Gabritschevsky’s oeuvre is strikingly diverse. One great passage in his brother Georg’s letter illuminates that characteristic: “He understood from the outset that mutations were something mysterious and important in the life of insects and he had carried out clever experiments on them. I remember one day our grandfather coming into the house asking, ‘What’s the matter with Eugen? He goes round and round in circles in the meadow with his arms stretched out and his head to one side.’ Eugen replied it was simply a personification of the different birds of prey he had seen in the sky. Later, too, when he talked about his scientific experiments and observation of insects, he always personified them in a way. He talked about them as if they were acquaintances.”

KM: Before his mental breakdown in 1929, Gabritschevsky was an accomplished entomologist and geneticist. Until now, curators and scholars have separated his earlier scientific illustrations from his later work done in the asylum. Do you see some congruency between the two?

VR: Not that I want to generalize, but more often than not, there are direct connections between an art brut artist’s oeuvre and the skills, expertise, and interests he/she cultivated in an earlier life. Nonetheless, what changes when someone experiences a mental illness is the solitude, a certain isolation, and regimented patterns of the asylum life, in addition to the suffering and withdrawal from society as an active member (forty-eight years in a psychiatric hospital is not negligible). In Gabritschevsky’s case, a visual difference appears between his early works—expressionist and more naturalist in style—and the ones created after his hospitalization. The latter are looser toward artistic conventions and progress into the fantastic. However, the perspective/angle he takes on his subject matter is still the same—the serial and methodical approach of a scientific mind—as well as his fascination with color variations and mutations, the sophistication of his composition, and his propensity for dramatization (notably the sinister and theatrical). There is always this curtain you need to cross in order to access the imperceptible and his inner vision.

KM: You have forged strong professional and institutional relationships with the Collection de l’Art Brut in Lausanne, Switzerland, and the Maison Rouge in Paris (where the first iteration of the Gabritschevsky exhibition was held). Will you continue to collaborate with international institutions?

VR: Absolutely— these collaborations are not only essential in today’s art landscape, they are always extremely rich, and impact the quality of our exhibitions at the American Folk Art Museum. Either to export our great American artists or to import new discoveries from around the world, such partnerships reinforce our leadership role and stimulate prolific cross-pollinating dialogues, to borrow Gabritschevsky’s language.

Eugen Gabritschevsky: Theater of the Imperceptible is on view at the American Folk Art Museum, New York, from March 14 to August 20, 2017. The exhibition was organized in collaboration with the Collection de l’Art Brut, Lausanne, and the foundation La Maison Rouge, Paris. A 192-page catalogue, Eugen Gabritschevsky, 1893–1979 (Snoeck, 2016), is available.

KENT MITCHELL MINTURN teaches courses on modern art and its theories at the Institute of Fine Arts in New York. He is currently completing a monograph on Jean Dubuffet as both a writer and an artist.