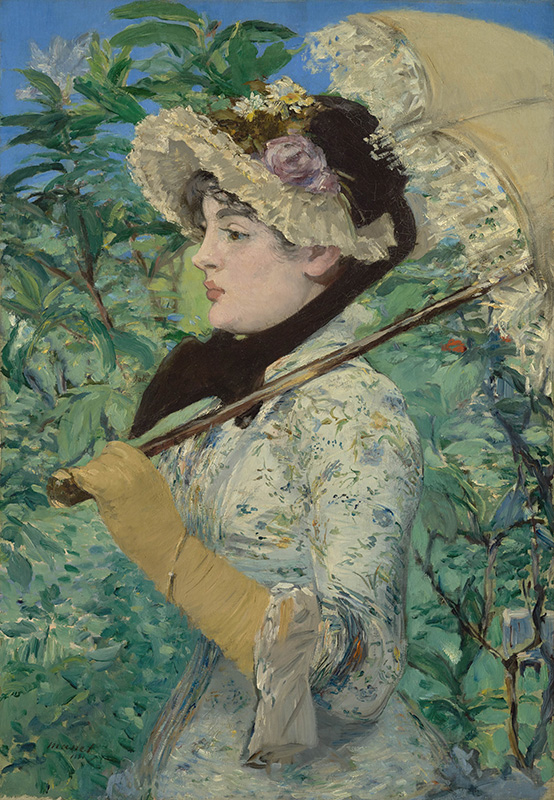 “La femme,” Edgar Degas once opined, “en général est laide”: women, in general, are ugly. Auguste Renoir, if his opinion were canvassed on the matter, would doubtless have asserted the exact contrary: every woman he painted, and he painted many in his long career, was portrayed with a robust, even overripe loveliness, the beauty of flowers in springtime. But where did Édouard Manet, the father of impressionism, stand in this regard? An answer to that question is suggested in the exhibition, Manet and Modern Beauty, at the Art Institute of Chicago.

Manet seems to have taken a different stance from Degas and Renoir on the question—somewhere in between, but not exactly so. He could surely imagine that a woman might be plain, but he was drawn to women he found beautiful and whom he depicted as such. Obviously, the actress Jeanne Demarsy, with her tawny gloves and parasol, is conceived in beauty and is intended to incarnate spring. Likewise, Méry Laurent, the embodiment of autumn, rises up in her loveliness before a flowering background. Both works were painted around 1882. But what is one to make of works like Manet’s Olympia, his Bar aux Folies-Bergère, or his Nana, presumably the depiction of a courtesan? Manet—who, lest we forget, died of complications from syphilis—denies these women anything like classical beauty, but he, the quintessential painter of modern life, imbues them with an attractiveness that is the more potent for being shorn of any of the gossamer mediations of traditional art and traditional impressionist painting. These works remind us—by the way—that, unlike the artists of mannerism or pop or certain strains of surrealism, the impressionists were perhaps the most robustly and consistently heterosexual group of painters in the entire canon of Western art. For whatever that is worth.