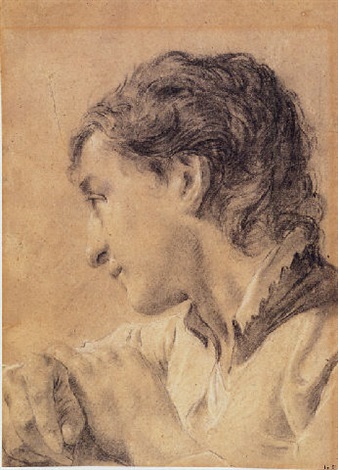 Brock is particularly fond of drawing materials that provide subtle suggestions of color: red chalk, blue paper, and, above all, luminous washes of ink from gold to brown. Perhaps the most spectacular of the wash drawings in his collection is the Venetian artist Giovanni Domenico Tiepolo’s sumptuous, highly theatrical Resurrection of Christ (Fig. 5), in which the risen Christ, virtually exploding from the tomb, soars heavenward in a blinding glory of mystic light. After the death of his father, Giovanni Battista (1696–1770), the head of the family painting firm, and Giovanni Domenico’s own retirement about 1785 from painting decorations for churches and palaces, he began to produce finished drawings executed in pen and wash, often in series. This spectacular sheet is from a group of over three hundred large sheets (each measuring approximately 18 by 14 inches) devoted to New Testament themes.

The several drawings by Giovanni Domenico Tiepolo are among the highpoints, or as Woody would say, the showstoppers, of his collection, drawings he finds irresistible for their direct sensuous appeal and sheer fantasy of invention, whether on mythological, religious, or secular themes. The smaller drawing in Figure 12 (which Brock has just acquired), a rehearsal for one of the larger sheets from the New Testament series, is a symbolic meditation of Christ’s sacrifice and the meaning of the Eucharist. Hovering on clouds above the altar, Christ, kneeling before God the Father and crowned with thorns, holds aloft, like a priest officiating at Mass, the chalice of wine and the wafer symbolic of his body and blood. The dove of the Holy Spirit, the third member of the Trinity, glides above and the cross looms behind. The whole is executed with a nervous and spontaneous touch that contrasts sharply with the more controlled execution of the larger sheets on this theme from the New Testament series (Bibliothèque Municipale de Rouen, France).

Yet another Tiepolo pen and wash drawing shows two monkeys, one seated grooming itself while the other, frowning, looks on (Fig. 7). At the bottom is an architectural fragment, a molding or pedestal. This is one of several drawings with lively sculptural groupings of animals associated with architectural details that appear to have served as models for painted decorations in the Tiepolo family villa at Zianigo near Venice.Other animal drawings by various hands in the Brock Collection include the one in Figure 11. Contemporary with Tiepolo’s monkeys, this wash drawing by the French painter Jean-Baptiste Greuze shows an infant tenderly embracing a large dog, a traditional symbol of fidelity. The artist used this image as a moralizing footnote in his drawing The Reconciliation of about 1785(Phoenix Art Museum), one of his complicated family dramas with a multitude of melodramatically gesticulating figures.

A number of works in the Brock Collection—Tiepolo’s Resurrection of Christ is but one—are characterized by unusually dramatic uses of light. These generally date from the late eighteenth century, a period when artists of the emerging romantic movement favored mysterious nocturnal moods accompanied by sublime or magical lighting effects. The Genoese artist Giovanni David’s Nightmare (Fig. 2), a macabre gothic thriller illuminated by flickering brazier light—in which a terrified young woman is threatened with death and damnation by the Fates, the Furies, and the denizens of Hell—is a splendid example of such imaginative illumination.

Like Tiepolo’s New Testament drawings, works in the collection by the eighteenth-century French artists Jean-Baptiste Oudry and Jean-Honoré Fragonard are also from extended series of illustrations. Five of Brock’s eight drawings by Oudry, an animal and still-life painter, are illustrations to the cynical fables of the seventeenth-century author Jean de La Fontaine (see Fig. 6). Executed with brush and black, gray, and white wash on blue paper, the drawings, which date from the 1730s, were translated into black-and-white engravings and published in a luxurious edition in Paris between 1755 and 1759. Numbering 275 sheets, they were originally preserved in bound albums that were only broken up in 1970. Thus the blue paper, so essential to the decorative impact of these lively illustrations, is in pristine condition.

As a painter of animals, Oudry was obviously drawn to La Fontaine’s moralizing fables because so many of the principal actors are animals, as in The Rat and the Elephant (Fig. 6). The rat is distinctly unimpressed with the great bulk and ponderous pace of the sultan’s elephant until the claws and jaws of the sultan’s pouncing cat convince him otherwise.

Fragonard produced in the 1780s a series of more than 175 drawings illustrating Orlando Furioso (Roland Enraged), the epic poem set in the crusades at the time of Charlemagne (r. 768–814) written by the sixteenth-century Italian poet Ludovico Ariosto (1474–1533). In the sheet in Figure 9, we see the knight Ruggiero seeking the beautiful Angelica, who has eluded his amorous advances. The most notable aspect of these illustrations is the remarkable openness and scribbling freedom with which the strokes of chalk and ink wash intertwine. Ruggiero’s impetuous movement is echoed in the furious energy of the artist’s marks. Imaginative suggestion triumphs over detail, encouraging the viewer to participate in the final creation of the image.

Studies of the human figure are also prominent in Brock’s collection of drawings. A number of these are studies or “academies” of single models posing. Historically, drawing from nude models has been an integral part of the young artist’s training, but mature artists have also posed models to better study the actions of single figures in multi-figure compositions. A model study in chalk and charcoal by the eighteenth-century Bolognese artist Francesco Monti is a fine example of the latter type (Fig. 8). Poles, as here, or slings of cord were often used to enable the model to hold a difficult pose over extended periods of time.  The finest figure study in the collection is the penned anatomical study of arm muscles, the skin flayed away, made by the young Flemish painter Peter Paul Rubens during his 1600 to 1605 sojourn in Mantua, Italy (Fig. 1). Calligraphic in character and carefully crosshatched to give the swelling forms a more powerful sculptural dimension, this is one of eleven surviving drawings that may have been intended as models for an engraved anatomy book that was never completed.

One of Brock’s favorite drawings is the chalk study of a head of a young man in Figure 4 by the eighteenth-century Venetian painter Giovanni Battista Piazzetta, who was equal in celebrity to Tiepolo. At a time when drawings framed and hung on the wall were first coming into fashion, Piazzetta’s chalk studies of the heads of idealized youths, maidens, and venerable elders were greatly sought after. While many of them subsequently suffered from mounting and exposure, this example, drawn in black and white chalks on a fibrous buff paper, is noteworthy for being quite well preserved.

Many of the drawings in the Brock Collection are models for works to be executed in other mediums: painting, architecture, decorative arts, and sculpture. In the eighteenth century the formal gardens of palaces were decorated with sculptures and monumental urns that were not only divertingly decorative but allegorical or symbolic. A splendid example is the pen drawing of an urn with chained lions by the French court sculptor René-Michel Slodtz (Fig. 3). The motif of the captive lions is undoubtedly a flattering allusion to the might and power of the prince or monarch who commissioned the design. A drawing for a relief sculpture by another French sculptor, André-Jean Le Brun, who was active at the Polish court in the late eighteenth century, is executed in wonderfully fluid and luminous golden washes (Fig. 10). It shows a profile portrait of King Stanislaw II August being elevated by the figure of Fame, supported by the Arts, triumphing over the toppled figure of Father Time with his lethal scythe and relentless hourglass.

Brock’s lively spectrum of master drawings constitutes a richly nuanced backdrop for his opulent and refined collection of furniture and decorative arts. These are the very images that were once present in the consciousness of those who commissioned the elegant furniture and fanciful objects executed in rare materials that adorn his collection.

Splendor and Elegance: European Decorative Arts and Drawings from the Horace Wood Brock Collection will be on view at the Museum of  Fine Arts, Boston, through May 19. In next month’s issue of Antiques, Rebecca Tilles will examine a group of fine French and English clocks from the collection.

CLIFFORD S. ACKLEY is the chair of Prints, Drawings, and Photographs and the Ruth and Carl J. Shapiro Curator of Prints and Drawings at the Museum of Fine Arts, Boston.