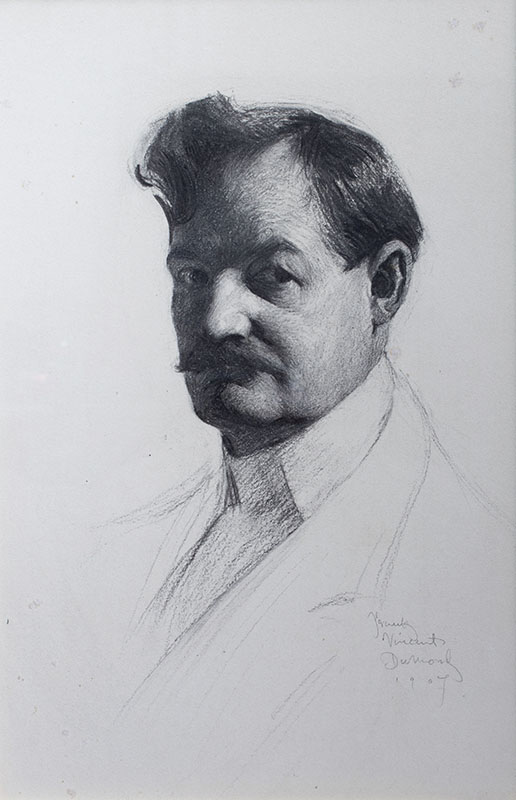 Almost invariably, the successful among us point to some teacher—whether that person held the title, or merely, and most importantly, had ability—whose guidance and inspiration made all the difference. As John Steinbeck once said, “I have come to believe that a great teacher is a great artist and that there are as few as there are any other great artists.”1 Some of these teachers—Thomas Eakins, Hans Hofmann— enjoyed a pedagogical reputation that rivaled their renown as practicing artists. But, as if to confirm that cutting adage, “Those who can, do; those who can’t, teach,” many remain as forgotten as their pupils. With The Prismatic Palette: Frank Vincent DuMond and his Students, Connecticut’s Lyman Allyn Art Museum celebrates an artist whose dedication to teaching may have eclipsed his own work, but whose career constituted a success not measured by fame.

Born in Rochester, New York, in 1865, DuMond enrolled at the Art Students League of New York in 1884, studying with J. Carroll Beckwith and William Sartain. Eight years later, after a sojourn in Europe— which included study at the Académie Julian under Gustave Boulanger and Jules-Joseph Lefebvre and recognition at the Salon of 1890—he taught his first class at the Art Students League. Newly married in 1895, to his former student and fellow artist Helen Xavier, DuMond returned with his wife to France, painting and teaching there for the next five years. When the couple returned stateside, DuMond resumed his association with the Art Students League, where he continued to teach until his death at eighty-five in 1951.

Although DuMond was not as well known as such artist-teachers as William Merritt Chase or John Sloan (both of whom taught at the League), the school’s long-time administrator Stewart Klonis stated, “No other man in the League’s history had any comparable influence on the League’s evolution.”2 DuMond initiated changes to the school’s way of doing things, eliminating drawing from casts as a prerequisite for life drawing classes and allowing men and women to train together. But it was his pronounced ability to communicate ideas about art that mattered most. “Take John Marin,” Klonis told the New York Times, “who says that he learned a lot from many masters, but feels that from among his many teachers, DuMond was the only one.”3

DuMond was a working artist from the start. During his student days in New York, he contributed illustrations, first to the New York Daily Graphic and then for magazines and books from Harper and Brothers, work that he continued doing for a number of years. Later, he took on portrait commissions, producing likenesses of bank presidents and business executives. In 1913 DuMond began work (with an assist from Helen) on massive murals for the Panama-Pacific International Exposition, which opened in San Francisco in 1915. Teaching, too, was part of his program early on; in the summers of 1893 and 1894 he took a group of Americans to paint in the French countryside. Although DuMond would come to delight in his vocation, he wasn’t thrilled with his first teaching experience, finding his students less serious about their work than he would wish.

DuMond first made his mark as an artist with The Holy Family, a painting that depicts Christ blessing a humble meal set before his parents. At the Salon of 1890, it was awarded a third-class medal. The canvas combines the conventionally academic with a hint of modernity, an almost streamlined imagining of the scene in which the figures dominate the un-fussily rendered interior. Before the end of the decade, an incipient naturalism began to appear in the artist’s work, especially after he and his wife started spending summers in Martigues, a fishing village not far from Marseille. In Garden Steps in Southern France, a seated figure practically disappears against the pervasive terracotta tone he used to conjure flower pots, wooden barrels, and a garden wall (Fig. 3). While clearly composed, the picture’s nearly non-hierarchical construction affords the viewer a certain freedom, a greater ability to enter the scene.

Over time, DuMond made measured forays into other artistic styles, absorbing aspects of art nouveau, symbolism, and impressionism. But as Lyman Allyn Art Museum curator Tanya Pohrt says: “He held firm to traditional core principles about drawing and painting and stuck to his belief in the enduring value of the Old Masters and more contemporary figures, such as Winslow Homer. He seems to have been wary of some of the ‘isms’ that were passing through the art world, preferring the stability of time-tested ideals when it came to teaching.” Charles B. Ferguson, former director of the New Britain Museum of American Art, studied with DuMond in the 1940s. In an appreciation he penned for a 1990 exhibition of the artist’s work at the Florence Griswold Museum in Old Lyme, Connecticut, Ferguson recalled DuMond’s response when another student asked what he thought of Picasso. “After a pause, DuMond replied that he didn’t think about Picasso. ‘Well,’ she said, ‘he’s very popular,’ whereupon DuMond gently replied, ‘so is ignorance.’”4

Arguably, DuMond’s work entered its most modern phase with his return to the United States in 1900, when he not only resumed his affiliation with the Art Students League, but joined the nascent artists’ colony at Old Lyme, where he offered his expertise in landscape painting. This creative sanctuary was a haven for tonalists (who included the colony’s founder, Henry Ward Ranger, and later, Carleton Wiggins and Bruce Crane, among others), and DuMond took a crack at generating his own dreamy scenes, including a seemingly ceremonial gathering entitled Figures in a Landscape, from 1902 (Fig. 5).

DuMond’s attachment to the countryside and the creative and companionable opportunities it afforded was cemented when he and his wife bought a colonial farmhouse in Connecticut in 1906. The couple’s hilltop digs proved an inspiration, as Du- Mond took to capturing the views that spread out before him. The moody, mystical curtain of color manifest in Figures in a Landscape now gave way to more keenly observed, yet loosely rendered depictions of the natural environment. “DuMond’s small Top of the Hill is a gem of a painting that shows the artist’s farm on Grassy Hill Road,” Pohrt says (Fig. 1). “This piece and several other small plein air scenes from the same period show the artist’s painting style shifting and brightening, with DuMond’s signature greens dominating the scene.” With Autumn in Lyme DuMond exercises his impressionistic muscles, capturing an outcropping of granite and leaf-covered earth (Fig. 4). Executed with flick-like strokes, the picture is as much a celebration of brushwork as it is an interpretation of nature.

Tall and sociable, a father of two, a gardener and avid fly fisherman, DuMond was not terribly aggressive in promoting himself. But he was no naïf when it came to business, happy to accept illustration and mural work so that, among other things, he could invest in real estate. In 1901, with Henry Ward Ranger as ringleader, he had joined Childe Hassam, Allen Butler Talcott, and Louis Paul Dessar in building Central Park Studios, a cooperative at 27 West Sixty-Seventh Street in Manhattan intended for artists like themselves. The units featured well-lit, double-height studio spaces with ample living and sleeping areas. DuMond created a three-panel mural for the entrance hall. The property proved a success and the investors went on to expand their portfolio with several other residential buildings across the Upper West Side.

In addition to directing summer sessions at Old Lyme, over the years, DuMond led al fresco classes in Connecticut’s Litchfield and Middlesex counties, as well as in Vermont and Nova Scotia. “We all listened intently to DuMond’s critiques, sometimes with apprehension,” Ferguson noted in his memoir. “He never said an unkind word, but what he didn’t say was criticism enough and hard to take.”5

Central to DuMond’s plein-air instruction was what came to be called the “prismatic palette.” “DuMond taught his students a method of premixing color strings in stepped values, moving from light to dark values by creating color ‘notes’ analogous to musical keys,” Pohrt says. “This approach helped his students identify value and saturation to better understand how color is affected by light and shadow.”

With colors premixed, painters could avoid blending hues afresh outdoors when light and weather conditions changed. “DuMond likely first learned to premix colors in sequence during his studies in France, as it was an element of nineteenth-century art practice,” Pohrt adds. “His own success with this technique, combined with his long career as an instructor, meant that he distilled and presented painting techniques and ideas about color theory in new ways. These ideas, gleaned from a long career in painting and refined over his decades of teaching, resonated deeply with his students.” After DuMond’s death, his former student Frank Mason took over his classes at the Art Students League, where he promulgated DuMond’s color strategy. Arthur F. Maynard, who also studied with DuMond, carried those ideas to the Ridgewood Art Institute in New Jersey, where he taught for decades.

Although DuMond enjoyed a respectable professional status—membership in the National Academy of Design; institutional recognition from the Corcoran Gallery of Art, the Pennsylvania Academy of the Fine Arts, and the Art Institute of Chicago— he took special satisfaction in teaching, helping his students to achieve the “mental habit of reading nature understandingly and grasping its artistic significance.”6 Writing in American Artist magazine in 1974, artist Herbert Abrams noted: “Frank Vincent DuMond left his students with a working knowledge of the action of light as it reveals form in nature. Through this he led them to understand and approach the world with a view to expressing the beauty found in visual truth. The force of his personality gave greater meaning to the principles he taught.”7 While not one to mince words, DuMond assessed his pedagogical ability in a self-effacing way, saying: “We are all in a strange forest, and because I have been here longer, I am here to guide you part of the way. Reaching that, I will tell you what I think is ahead. From there, it is yours to go on.”8