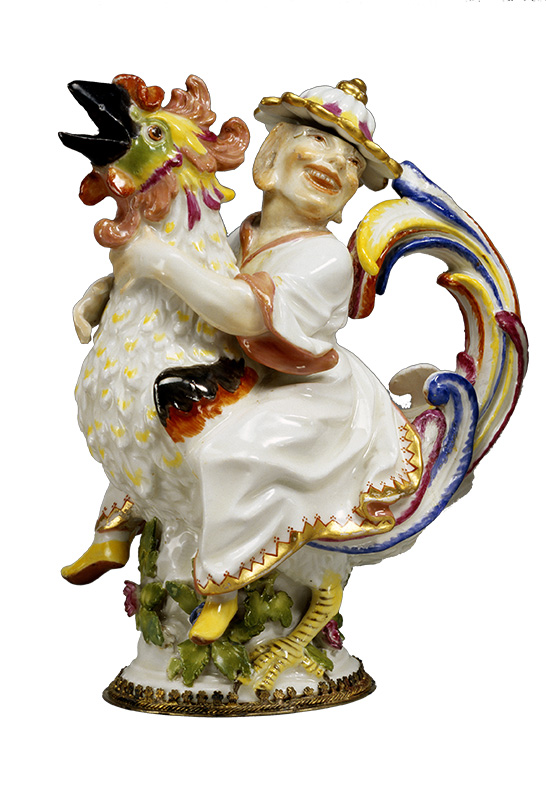 Augustus II, elector of Saxony (1670–1733), was obsessed with porcelain. Europeans had been fascinated by the lightweight white porcelain Marco Polo brought back from China in 1295, but no one had been able to reproduce a suitable paste. So when alchemist Johann Friedrich Böttger (1682–1719) boasted that he could create the “white gold,” Augustus demanded that he prove it. Finally, in 1708, using kaolin clay, Böttger was able to create the first European white porcelain. Two years later, in January 1710, using Böttger’s recipe, Augustus started the Meissen Porcelain Manufactory. The workshop is active to this day, creating its pieces by hand, and marking them with a special insignia: crossed swords in cobalt blue.

Similarly afflicted with the maladie de porcelaine, New York banker Henry H. Arnhold (1921–2018)—a refugee from Nazi Germany—assembled a vast collection of Meissen, recently donated to the Frick Collection and now the subject of an exhibition, Henry Arnhold’s Meissen Palace: Celebrating a Collector. Arnhold’s gift consists of more than one hundred pieces of Meissen, including some that were owned by Augustus himself. The collection is on view in the Frick’s Portico Gallery, which was redesigned in 2011 with Arnhold’s help, specifically to house his collection. Arnhold’s “palace” is organized by color—”Böttger red,” green, blue, gilded—just as in traditional eighteenth-century porcelain rooms, and showcases some of the most impressive selections from his gift.