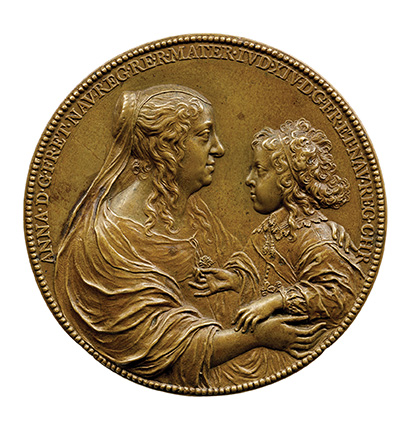 The historian Barbara Tuchman aptly characterized the Renaissance as “the period when the values of this world replaced those of the hereafter. . . . [when] the individual found in himself, rather than in God, the designer and captain of his fate.” While not diminishing the importance of religious art, this humanist philosophy of mankind’s own importance beneath the sun encouraged notables to commemorate themselves through portraiture. Influenced by classical antiquity, fifteenth-century Italian sculptors embellished public squares and buildings with equestrian statuary of princes and generals, and sculpted portrait busts for public and domestic interiors. They also created the most intimate of all sculptural forms, the portrait medal.

This month the Frick Collection presents The Pursuit of Immortality: Masterpieces from the Scher Collection of Portrait Medals. The exhibition celebrates the largest acquisition in its history, a gift of approximately 450 portrait medals from the collection of Stephen K. and Janie Woo Scher. Departing from the conventional view of medals as a branch of numismatics, the show considers them as works of art.

Inspired by ancient Greek and Roman coinage, portrait medals were produced mainly in bronze or a related copper alloy, sometimes gilded or silvered, sometimes in lead, and occasionally in solid silver or gold. Often cast, some portrait medals were struck like minted coinage. In any case, these intimate roundels, which evoke in miniature the celebrated tondos of Michelangelo and the della Robbias, embody a wealth of history and exceptional sculptural technique.

Scher, a medieval and Renaissance scholar and former chairman of the Brown University art department, had begun acquiring art at age fourteen. He says his interest in medals was kindled on a visit to Florence while studying at Yale. Having been fascinated by the historic figures in Jacob Burckhardt’s book The Civilization of the Renaissance in Italy, Scher happened into an antiquarian shop along the Arno and asked the owner what sort of things he sold. “The dealer brought out a few objects, one of which was possibly Matteo de’ Pasti’s medal of Sigismondo Malatesta with the wonderful image of his castle on the reverse. I was immediately entranced by the fact that I was holding a physical link with one of the personalities in Burckhardt’s book.” Thereafter during the trip, “I visited medal collections in Italian museums, knowing that I wanted to collect this type of art.”

Today, his collection—including an example he later acquired of Pasti’s Malatesta medal—attests to the connoisseurship and vast knowledge underpinning his pleasure. Apart from their beauty as relief sculpture, each medal engages the eye and mind as a physical embodiment of a historical moment and often as a work of complex symbolism.

Exemplifying this is Leonello d’Este, Marquess of Ferrara, by the celebrated painter-medalist, Antonio Pisano, called Pisanello, who is credited with inventing the portrait medal as a Renaissance art form, and who produced the first cast portrait medals depicting contemporary subjects. Though inspired by classical coinage, the portrait is entirely of its time. Leonello’s angular profile—presumably based on Pisanello’s own painted portrait of him—is weighted by his solid mass of curly hair, its texture complemented by the sculpted texture of Leonello’s embroidered garment. On the reverse—framed by the artist’s credit line, which (translated from Latin) reads: “the work of Pisanello the painter”—two sensually modeled nudes carry great baskets of olive branches, symbols of peace. Peace was a state cherished by this most gentle ruler who was celebrated as a diplomat and scholar.

Though men are the usual subjects, several medals salute noteworthy women. Pisanello’s Cecilia Gonzaga bears the gracefully modeled profile of this learned daughter of Gianfrancesco Gonzaga, Marquess of Mantua. The reverse depicts an allegorical tribute to the chaste piety that impelled Cecilia to choose a nun’s life over a dynastic marriage: seated beneath a crescent moon (symbolizing the virginal moon goddess Diana), the figure of Chastity (classically undraped, for the Renaissance valued the chaste even more when they were desirable) caresses a docile unicorn (only a virgin could tame these fierce creatures). The show’s curator, Aimee Ng, a specialist in Italian Renaissance art, notes that, amusingly, instead of the usual horse, Pisanello modeled his fleecy unicorn after a drawing he had made of a goat.

Accompanied by a fully illustrated catalogue with an essay by Ng, the exhibition integrates the medals with several associated sculptures and works on paper from the Frick’s permanent collection. A newly produced video illustrates the medal-casting process step by step, while three medals are specially mounted so that visitors can examine both sides. Magnifying glasses are available in the galleries—but it always pays to bring your own.

The Pursuit of Immortality: Masterpieces from the Scher Collection of Portrait Medals is on view at the Frick Collection from May 9 to September 10, 2017.