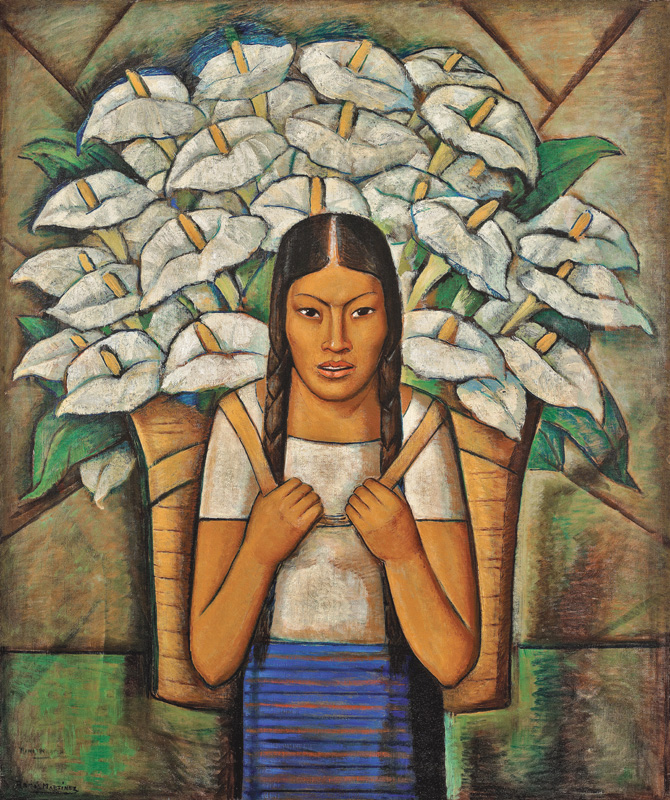 Even though Diego Rivera, José Clemente Orozco, and David Alfaro Siqueiros are widely admired today, it requires a leap of the imagination to recall the thunderous acclaim that greeted their arrival in America in the late 1920s. That reception and their subsequent influence on our nation’s art form the worthy subject of Vida Americana: Mexican Muralists Remake American Art, 1925–1945, a forthcoming exhibition at the Whitney Museum of American Art. Los Tres Grandes, as they were known, represented nothing less than a revolutionary counterweight to the entire modernist tradition that had flowed from Paris to New York over the previous half century. For Thomas Hart Benton, this “was the only great art of our time. . . . The Mexican movement and our Americanist one [the regionalist school that Benton himself had championed] were the only two in this century which made a genuine effort to wrest art from its privatism and return it to a meaningful place in Western society.” Because of the political fervor that dominated their work, the Mexican masters were widely hailed as a watershed in the history of art, especially American art. An editorial in Art Digest observed that “Social protest is one thing American artists did not ‘crib’ from the French (to a Frenchman art is an escape not a reminder of the defects in his national life). It came up from the south below the Rio Grande.”

Social protest (or political art, as we might call it today) was a decidedly new phenomenon in the 1920s and 1930s. One could argue, of course, that all art has a political dimension, varying only in the degree to which it is openly avowed. But the marriage of high art and overtly political art first occurred, in America at least, amid the social upheavals of the 1930s. The rapturous embrace of the Mexican muralists—from the most provocative of them to subtler, lesser-known figures such as Alfredo Ramos Martínez, with his empathetic depictions of Latino workers in his murals in the Los Angeles area—can be seen as the awakening of an appetite that had been latent in American art since the Ashcan school at the turn of the century. But Rivera and Orozco were able to ignite that potential because their arrival coincided with the darkest days of the Great Depression, when even a largely apolitical populace was more socially engaged than at any point since the Civil War. The dominant ideology of this period was one of populist communitarianism, tipping over at times into communism. Although the mass media of radio and film fostered and reflected the first of those tendencies, political sentiments had made few inroads into the fine arts. With the coming of the Mexican muralists, all of that would change.

The most explicitly political of the three Mexican masters was Orozco, who was also the first to arrive in America. He was so committed to Leninism that he publicly assailed Diego Rivera for accepting commissions from Nelson Rockefeller and Edsel Ford. In Call to Revolution and Table of Universal Brotherhood,  commissioned by the New School, machete-wielding natives prepare to decapitate capitalists (Fig. 3). The thorough ascendancy of politics over form imbues this painting, like most of Orozco’s art, with greater historical than aesthetic interest.

The same cannot be said of Siqueiros, the youngest of the three. Although his career began within the muralist tradition, he soon revealed a psychological depth that Orozco could never have attained and that complicated, to the point of subverting, the political message that it was meant to convey. His tenebrous portrait of Emiliano Zapata, the Mexican revolutionary who had died over a decade before, fails as propaganda precisely because it succeeds as art, because Siqueiros refuses to disguise his ambivalence toward his subject (Fig. 1).

The greatest of the three Mexican masters and the most famous was Diego Rivera, who eschewed both the propagandistic violence of Orozco and the psychological penetration of Siqueiros. So perfect is Rivera’s art within its chosen terms that he commands our admiration as one of the greatest masters of twentieth-century art. His paintings gain little, however, from close examination: they need to be seen from a decent remove, flung across the walls of some great public space. Only then can the viewer take in the work’s unrelenting richness of detail, its all-mastering symmetry and chromatic subtlety, together with its thematic power. Rivera lays bare the complexity of an automobile assembly line in Detroit Industry (1932–1933) as well as the perils and promise of science in Man at the Crossroads, from one year later. Never before and never since would industrial machinery, in all its sinuous, silvery allure, be paid as handsome a tribute as in the Detroit series, where every gear and lever, every crank and winch is accorded, just this once, the respect it deserves.

The effect of the three Mexicans on a receptive American art establishment was immediate and profound. Certainly there were a number of second-tier painters, among them Elizabeth Catlett and Harold Lehman and others associated with the WPA, who hewed so closely to the visual language of their Mexican models that their work is nearly indistinguishable from it. But for other artists, including Jacob Lawrence, Philip Guston, Ben Shahn, and Paul Cadmus, the Mexican influence was less formal than ideological: it opened up for them a context of political engagement to which each of them responded in an increasingly personal way.

Perhaps the two most interesting artists to be drawn into the orbit of the Mexican muralists were Benton and Jackson Pollock, his student. No American understood the point and possibilities of the new art better than Benton. In the Steel panel of America Today (1930–1931), iridescent human forms, set into a nearly expressionist backdrop, represent an essentially American response to the Mexican muralists, all the while embodying the larger social and artistic ambitions of their precedents.

The example of Jackson Pollock, however, is more ambiguous. Only occasionally did the manifest content of his art suggest the overt political preoccupations of the Mexican muralists. Rather, in early works like The Flame (1934–1938) and Naked Man with Knife (c. 1938–1940), what remains of their influence is a certain intuition about size and composition, as well as a kind of formal energy that, even as it approaches abstraction, preserves something of the rough populism of Orozco and Siqueiros. At the same time, and in the Marxian spirit of the age, Pollock unites the seemingly antithetical strains of Mexico and France, of force and refinement, of revolution and tradition, into a daring synthesis that would come to define a new epoch in Western art and to demarcate it from everything that went before.

1 Quoted in Barbara Haskell, “América: Mexican Muralism and Art in the United States, 1925–1945,” in Vida Americana: Mexican Muralists Remake American Art, 1925–1945, ed. Barbara Haskell (New Haven and New York: Yale University Press in association with the Whitney Museum of American Art, 2020), p. 31. 2 Quoted ibid, p.34. 3 This fresco was painted on a wall in Rockefeller Center in New York, but later destroyed because it included a portrait of Lenin and other Soviet iconography. Rivera repainted the mural at a smaller scale in 1934 at the Palacio de Bellas Artes in Mexico City—adding such figures as Karl Marx and Leon Trotsky—and renamed it Man, Controller of the Universe (Fig. 3).