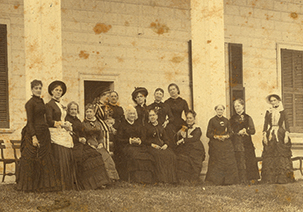 Despite its dainty name the Mount Vernon Ladies’ Association is not an outfit to be trifled with. Nor is it one to do anything by half measures. Founded in 1858, it is comprised of twenty-seven members, each representing a state in the union at that time, who approached and still approach the project of preserving George Washington’s estate with an almost military rigor. Mount Vernon was virtually empty when the association was formed; the members set about furnishing it by having the representative from each state adopt a room. In 1858 these representatives were the wives and daughters of powerful politicians, jurists, and cultural figures, and thus well positioned to locate and donate important objects. Alice Mary Longfellow, for instance, daughter of the poet Henry Wadsworth Longfellow, located George Washington’s desk and brought it back to the estate, where it remains today.

Other gifts were equally impressive though not all continue to fit the stringent requirements of the association. Curatorial research, led by Carol Cadou, senior vice president of historic preservation and collections, and a staff of four curators, continues to subject everything ever donated to rigorous examination, eliminating items that no longer fit the mission of retaining the most “authentic representations of George and Martha’s possessions.” Thus the deaccessioning of some seventy impressive pieces—bedsteads, looking glasses, chests of drawers, and so forth—many of which have been at Mount Vernon for more than a hundred years. And thus the windfall of important American furniture that will appear in Freeman’s April auction, with all the proceeds going back to Mount Vernon’s acquisitions fund. Again, no half measures for the Mount Vernon Ladies.

Lynda Cain, head of American furniture and decorative arts at Freeman’s, points with particular interest to eight comb-back Windsor armchairs that graced the estate’s piazza for 121 years. They were commissioned and donated in 1891 by Mrs. Tobias Gibson Richardson Slocomb of Louisiana, who found a reference to such chairs in Washington’s probate inventory and set about having them reproduced by a firm in Connecticut. Clearly the chairs had to go, but their early history as part of the effort to re-create the first president’s furnishings and the chairs themselves constitute impressive value of their own.

Alice Mary Longfellow in a photograph of c. 1891. She was appointed vice regent for Massachusetts at the age of twenty-nine and served for fifty years, a record that stands to this day.

The marquee items in the auction are two Chippendale tassel-back side chairs with a provenance worthy of Masterpiece Theater. Originally owned by Justice Samuel Chase, a signer of the Declaration of Independence, they eventually found their way to Jean Margaret Davenport Lander, actress, philanthropist, great beauty, and one half of the “it” couple of the 1860s. (You can Google her and her high-flying husband, Frederick W. Lander.) Jean Lander presented the chairs to the MVLA in 1893. Others from the set are in the Museum of Fine Arts, Boston, and the Diplomatic Reception Rooms in the Department of State. But why are these handsome chairs in the sale? For the simple reason, Carol Cadou points out, that in the period of their construction George Washington was not purchasing high-style Philadelphia furniture.

The sale, the first of several in Mount Vernon’s deaccessioning campaign, will proceed in Philadelphia, the city of Washington’s presidency, and its yield will revert to the organization that has safeguarded his estate for a century and a half, and deserves someday a fine cultural history of its own.