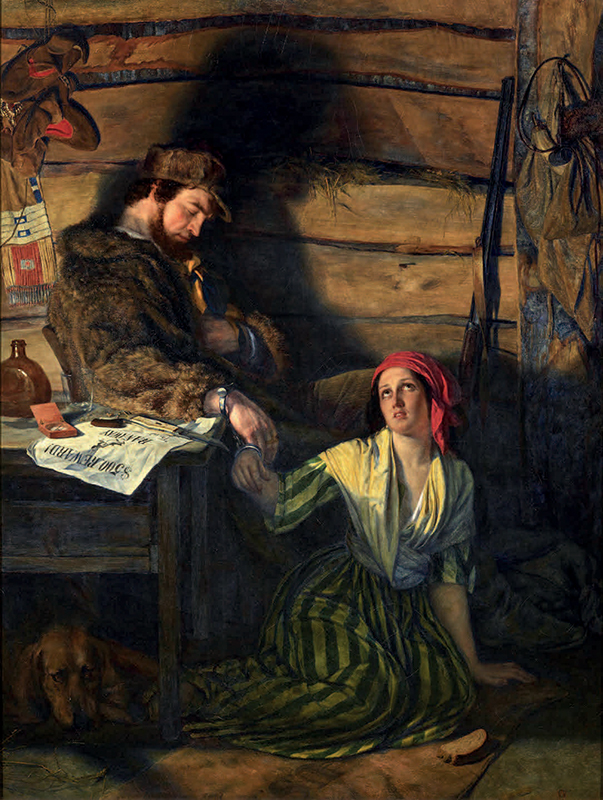 A passion play in Dallas

The Meadows Museum, part of Southern Methodist University, has just acquired a decidedly non-Methodist painting, Pedro de Campaña’s Calvary, which is not only a very Catholic work, but a very Counter-Reformation one at that. Born Pieter de Kempener in the Spanishruled Netherlands, Campaña spent most of his career in Spain. Thus this new acquisition will fit right in at the Meadows Museum, which has been called the Prado on the Prairie thanks to its display of works by El Greco, Maino, Velasquez, and Goya. Building on the collection that Algur H. Meadows donated to the university in 1962, the museum, which opened in 1965, describes itself as “one of the largest and most comprehensive collections of Spanish art outside of Spain.”

Its latest acquisition is a diminutive but deeply felt devotional work depicting the crucified Christ flanked by the two thieves, with the Virgin and the Magdalen at the foot of the cross. The enveloping darkness of the work is the darkness of storms: we see an edge of daylight in the distance, engulfed by menacing clouds and relieved only by the hint of radiance at the summit, as the heavens begin to open up. But it is the dismal night of the soul that dominates the work. Although the painting is dated to around 1560, such details as the flesh of the two thieves and the Tintoretto-esque radiance of the opening heavens hint at a broader European mannerism, and suggest that the work might be from a little later. The face of Christ, however, fully embodies the native traditions of the Spanish Renaissance.

The Bowdoin College Museum of Art—with its fine neoclassical building designed by Charles Follen McKim— has just acquired a striking new painting by the English artist William Gale. The Captured Runaway, painted in 1856 as a comment on the passage of the 1850 Fugitive Slave Act in the United States, is an odd example of an intensely American work conceived by someone who had never been to America. The scene takes place in a log cabin, starkly illuminated by the light of an unseen lamp. Behind a table sits a bearded man asleep, and handcuffed to him, at his feet, stirs a beautiful maiden who bears a closer resemblance to some beauty of the Middle East, which Gale had indeed visited, than to any denizen of the United States. The geographical oddity of the work is underscored by how the lovely runaway gazes theatrically heavenward, like one of Domenichino’s very baroque saints or sibyls.

Without question this is an imposing work by one of the lesser-known members of the Pre-Raphaelite circle. It is very much infused with that spirit of positivism, that unyielding fealty to hard data, that is the chief characteristic of artists like Richard Holman Hunt, Gale’s slightly younger contemporary. In spite of the portrayal of the woman, the cabin and the bearded bounty hunter carry considerable conviction. On the table is a sheet of paper with the words “$500 Reward,” hammering home the abolitionist message of the entire work. Sympathy for this message, however, was hardly a foregone conclusion in nineteenth-century England. Gale’s work might even have been courageous. Although slavery had been abolished throughout the British Empire by 1834, one might be surprised to learn that, during the American Civil War, much of the British establishment sided with the South.

In Baltimore, the New Woman

Lotte Laserstein’s Traute Asleep on a Sofa has just been acquired by the Baltimore Museum of Art. This German- Swedish artist of Jewish ancestry was so long-lived—she was born in 1898 and died in 1993—that even though she had been largely forgotten by art historians, she survived long enough to witness her own reputational resurrection in the 1980s. She represents a powerful example of one of the dominant strains of German painting in the 1920s and the early 1930s, the movement known as Neue Sachlichkeit, or New Objectivity, which emphasized a dispassionate and unadorned examination of the human figure. Laserstein’s depictions of men and women fully express the formal and affective themes of the movement, with their big bones and slightly ill-fitting clothes.

The present work, oil on paper, is a brown-on-brown monochrome of an androgynous woman whose large hands dominate the foreground. The BMA informs us that “Traute’s androgynous appearance also contributed to Laserstein’s portrayal of her as the embodiment of the New Woman, embracing newfound independence and gender fluidity.” One of the most remarkable things about this artist’s work is precisely that “gender fluidity.” The women who predominate in her art are of such indeterminate status that Laserstein seems, through a calculated subterfuge, to try to blur any distinction between them and the masculine traits they clearly embody. As with most of her work, little attempt is made in Traute Asleep on a Sofa to charm the viewer with any endearments of color or composition. Mood and feeling are likewise entirely banished from this image.

A bronze masterpiece arrives at the Met

The Metropolitan Museum of Art’s already excellent collection of Renaissance bronzes has just been enhanced by the acquisition of a gilded roundel, created around 1500 and attributed to Gian Marco Cavalli, a goldsmith, engraver, and sculptor who distinguished himself in the Gonzaga court in Mantua. There he associated and occasionally collaborated with the great Andrea Mantegna, as well as with another fine sculptor, Pier Jacopo Alari Bonacolsi—known as Antico—both of whom are already well represented in the museum’s collections.

This new acquisition further exemplifies the probing, disciplined classicism associated with the artists of the Gonzaga court. In it we see Mars, Venus, and Cupid in an attitude of leisure and soft repose, while Vulcan works to complete a military helmet—presumably for Mars—at his forge. The beauty of the object—which is far more imposing in real life than in photographs— consists not only in the modeling of the forms and the detailed depiction of the objects at Mars’s feet, but also in the masterful interplay of solids and voids and the alteration between the dark bronze and the gilded accents, especially in the wings and hair of Venus.

No less impressive is the graphic skill with which the subject is framed by the surrounding gilded circumference and by the cartouche at the base, containing a hexametric verse that explains that “Venus Mars and Cupid are having fun while you, Vulcan, labor.” The very typography underscores the role that Mantegna and others in the Gonzaga court played in the revival of ancient Roman lettering, an often-overlooked discipline that would be of fundamental importance in the visual evolution of the Renaissance and beyond.

According to James David Draper—who was a curator of European sculpture at the Met for forty-five years and whose bequest facilitated the purchase of the present work: “This is the most thrilling Renaissance bronze to appear on the market in ages.”

Among the more interesting figures in that hydraheaded movement known as international surrealism was Remedios Varo, whose painting Tailleur de Dames (Women’s Tailor) has just been acquired by the Museum of Fine Arts in Boston. Created in 1957, this work, with its muted palette of grays and greens, depicts four women and one man, a tailor, in the latter’s shop. Two of the women are modeling extravagant new creations for the benefit of the two others, presumably clients. This being a surrealist painting, one of the clients is flanked by two ghost-like avatars of herself, without explanation given or expected. And since, once again, this is a surrealist work, all of the figures, even those with their eyes open, have the aspect of somnambulists.

A native of Catalonia, Varo led a peripatetic life that passed through Paris and ended up in Mexico, where she consorted with such fellow female surrealists as Leonora Carrington, Kati Horna, and Frida Kahlo. Like them and all the other artists of that movement, Varo was greatly influenced by Freudian psychoanalysis, but unlike the more abstract and experiential strain of the movement that is exemplified in the works of Jean Arp and Amedeo Modigliani, among others, she cultivated a painstaking technique that aspired, both in form and even in materials, to resemble the Old Masters. The spirit of illustration is thus never far from her works, but that element, together with their formal legibility, accounts for both her general accessibility and her growing posthumous reputation.