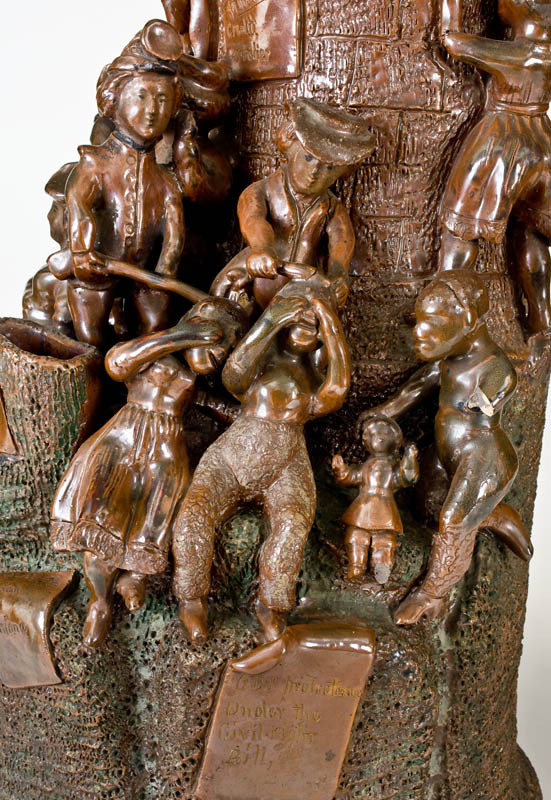 The recently discovered, unique stoneware marvel known as the Anna Pottery “Liberty Monument” combines ceramic artistry with deep meaning. This work was created in 1873 at Wallace and Cornwall Kirkpatrick’s manufactory in Anna, Illinois, and is named for the Lady Liberty figure at the top. The primary scene on the Monument, however, has a much darker meaning. It memorializes the massacre of Colfax, Louisiana’s Black citizens who protested voter suppression that occurred during the state’s 1872 gubernatorial election. (The complex events in Colfax continue to be topics of study for contemporary scholars.) News of the atrocity spread quickly across America via newspapers and word of mouth, and offered differing details regarding the massacre. It is unknown which version of the news reached the Kirkpatricks in Illinois, but their horrified, visceral response to the event is clear.

The Kirkpatricks, socially progressive and vocal about their views, pair the Colfax Massacre scene with a figure group satirizing Vice President Schuyler Colfax, who served from 1869 to 1873 under the Grant administration. Illustrative of corruption, Colfax teeters and is about to fall from the top of a ladder. Inscribed comments nearby associate him with the famous Crédit Mobilier scandal, relating to the Union Pacific’s involvement in construction of the Eastern portion of the Transcontinental Railroad. Match-holders and further inscriptions on the object condemn the controversial Match Tax, passed years earlier to help fund the American Civil War.

Winterthur Museum is honored to have been able to acquire this fascinating work and recognizes that it cannot, alone, interpret and share the important story portrayed by the Monument. Having for decades collected with an eye to diversity and inclusion, the museum is working to create a multifaceted interpretation of this object by engaging with community members, scholars, students, and others. With new information being discovered almost daily, Winterthur expects the interpretation of the Monument to evolve over time.

Leslie B. Grigsby is the senior curator of ceramics and glass at the Winterthur Museum, Garden, and Library