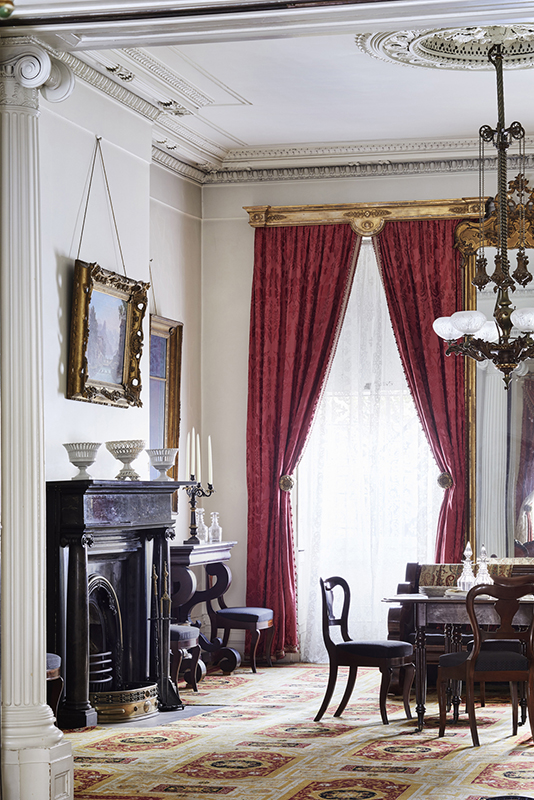 It was a dark and stormy afternoon when I toured the old Merchant’s House. Forgive my dramatic tone, reader, but for a house as storied as this one, it’s warranted. The museum, located in dowtown New York City on East Fourth Street, interprets nineteenth-century domestic life through the home and furnishings of a prosperous merchant family and their four Irish servants. Truly a portal to the past, the house is a Victorian time capsule, having been inhabited by the same family for nearly a hundred years. It retains all the original furnishings. Stunning inside and out, its red brick facade with Ionic columns and ornamental ironwork only hints at the jaw-dropping interiors that await.

As I began my tour I was handed a booklet and instructed to proceed to the garden behind the house. The sky was still clear as I stood in this sanctuary of stone and lush greenery, a far cry from the working yard of dirt and grass it had been in the nineteenth century. The museum’s gardener, John Rommel, has been a devoted volunteer since 1995 and continued to tend to the verdant space even when the museum was closed at the height of the pandemic. After admiring his handiwork, I open the guidebook and begin to get acquainted with the house and its residents.

The building was one of two identical structures constructed by Joseph Brewster, a hatter, in 1832. In 1835 he sold one of them to merchant Seabury Tredwell for $18,000. Born and raised on Long Island, Seabury moved to New York City sometime around 1800 at approximately age eighteen. Within a few years he made a name for himself in the hardware business, importing a range of metal goods. By the time Seabury purchased the house on East Fourth Street, he had retired at fifty-five years old. He moved in with his wife, Eliza, and their seven children.

Five years later Seabury and Eliza had their eighth child, Gertrude, who lived in the house her entire life. When she died in 1933 at the age of ninety-three, she was impoverished, and all her possessions were going to be auctioned off. Fortunately, another Tredwell descendant saw the historical significance of what Gertrude had left behind and turned the home into a museum, which opened to the public in 1936.

Tours proceed from the garden to the ground floor and continue all the way up to the servants’ rooms on the fourth floor. The front and rear parlors on the first floor are the jewel boxes of the house. The front parlor is a vision in red, with long red silk damask draperies framing tall windows, complemented by tufted, rococo revival furniture equally vibrant in color. I could easily spend forever in these two rooms, admiring every detail, especially the incredible plasterwork of the ceiling medallions, said to be the finest examples of this architectural feature still intact.

The Tredwells embraced new lighting technology as it became available over the years, and installed gas in the mid-1850s. Just as I was wondering what sort of illumination (or lack thereof) the gasoliers had provided, a docent offered to turn off the modern lamps, so I could see the effects of the last word in mid-nineteenth-century lighting technology.

Nineteenth-century homes were much darker than our modern eyes are accustomed to, and row houses, with their lack of side windows, posed extra challenges for lighting. The long hallways in the Merchant’s House are particularly dark, and a docent turned off the modern lights for emphasis, pointing out the textured ornamentation along the end of the stair railing, which was not merely decorative, but a tactile reminder that one is descending the last three steps.

Though the house was dark on the stormy afternoon I visited, its aura radiates light and warmth, in large part due to the friendliness and enthusiasm of the docents, who are happy to share details about the house and the Tredwell family. One of them remarked, “you can really feel their presence.” This wasn’t so much a comment on the occult but a reference to all of the Tredwell possessions surrounding us. It really does feel like they could be back at any moment. Some say they never left, which happens to be the title of a book the museum published recounting many strange occurrences over the years. The museum can’t say for sure if the house is in fact haunted, but candlelight ghost tours are available if anyone would like to find out for themselves. If there are indeed ghosts, they must be very friendly, for I sensed no menacing presence.

However, there is one confirmed specter: for the last decade, Kalodop II Park Corporation, a real estate development firm, has been trying unsuccessfully to win city approval to build a hotel on a lot adjacent to the Merchant’s House that is currently the site of a one-story parking garage.

According to museum management, engineers have determined that any construction would cause irreversible damage to the 189-year-old building, including the possibility of collapse. Even if the building could withstand the excavation and construction next door, the process of accommodating the development would entail removing the entire collection of nearly forty-five hundred objects off site and closing to the public for as long as two years, all at an estimated cost of nearly $5 million.

The Merchant House’s executive director, Margaret Halsey Gardiner, says that the museum has already put over half a million dollars toward fighting the proposed development, noting the “absurdity that we are in the position of actually having to protect our landmark building, which was the first designated in Manhattan in 1965 by the Landmarks Preservation Commission.”

Kalodop II Park Corp. did not respond to requests for comment, but, per earlier press reports, the company disputes the notion that hotel construction would cause severe harm to the Merchant’s House.

Still, the current proposed development is painfully reminiscent of development on the east side of the house in 1988 when a builder neglected to protect the house during demolition, causing major structural damage. The museum had to close to the public for two and a half years for restoration work. To learn more about the current state of events, consult the museum’s website.