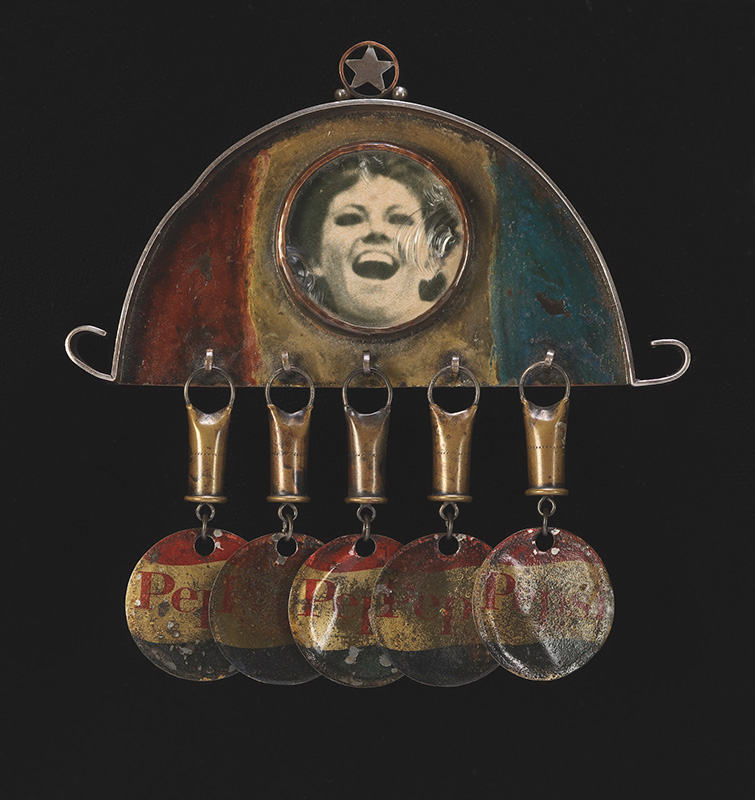 Storytelling in art, and the wearing of jewelry, are nearly as old as humankind,” wrote Lloyd E. Herman, director emeritus of the Smithsonian Art Museum’s Renwick Gallery, in the essay that opens the catalogue for Brilliant Stories: American Narrative Jewelry, a traveling exhibition mounted in 1994. This exhibition and accompanying text still stand as a seminal look at this broad topic as it relates to contemporary jewelry in the twentieth century.

Roman carved cameos, portrait miniatures, Victorian mourning jewelry, suffragette pins, Peruvian inlays—all of these can be considered examples of narrative jewelry, yet not much time has been dedicated to the study of the genre as a whole, even though much has been written about all of these different subsets of jewelry. The evolution of narrative jewelry in the US in the twentieth century is mostly uncharted.

A single definition of the genre does not exist. Narrative jewelry aims to tell a story and has a point of view. It is told from the perspective of the maker and it carries resonance with a larger group, be it a race, a culture, or gender. It is a story that is relatable and gives a voice—not only to the makers or the wearers but to an entire sector of the population. Jewelry, like literature, the most public of all art forms, is uniquely positioned to reach a wide audience and share many perspectives.

What makes narrative jewelry even more complex than a novel is its brevity. As Susan Cummins, former gallery owner, collector, and founder of Art Jewelry Forum, recently wrote in her essay on the narrative work of Danish artist Marie-Louise Kristensen: “A piece of jewelry doesn’t present a series or sequence of images like a comic book or a movie to lay out the characters and the events making up the story. It just has one single image or scene that remains fixed in time—no before or after.”2

There has never been an exact date established for when narrative jewelry first made its appearance in the US. By all accounts, the first American to work in the genre was J. Fred Woell, who began to make such jewelry in the early to mid-1960s and is known as the first to incorporate found objects and imagery into his work. Woell, who wanted to be a visual artist long before he decided to become a jeweler, created assemblages that were a statement on the wastefulness of our consumer culture. One of his earliest and most celebrated works is Come Alive, You’re in the Pepsi Generation (Fig. 1). Now in the collection of the Smithsonian American Art Museum, it features a photograph of a young woman who resembles the youthful free spirits featured in the Pepsi commercials, along with Pepsi bottle caps and bullet shells. Woell’s way of working started to influence not just other artists in his community but his students as well since he was building his career on the East Coast as a prominent educator alongside his artistic practice.

A common misconception is that narrative jewelry has to be figurative. There were several jewelry-making communities with distinct identities united by “their shared location in the American West, a place long associated with utopian ideals and embedded with mythologies about possibility and promise.” Ron Ho, a jeweler who lived in the Pacific Northwest, was part of a group of celebrated narrative artists who were united in their close kinship with the jewelry artist and educator Ramona Solberg, considered to be one of the “most significant American jewelry artists of our time.”Like Woell, Solberg was an early proponent of utilizing found objects in her artistic practice. Ho studied with Solberg at the University of Washington in Seattle in 1968, and later took her classes at Bellevue College, where she showed her students the possibilities of working with found objects.

Ho was of Chinese descent, and his jewelry stands out among his peers in the scheme of narrative work in the United States. He wanted his work to tell the stories of the countries that he had visited on his travels. He spent one year visiting every country in Asia, and, inspired by Solberg, collected artifacts along the way. An important piece that combines all of Ho’s ideas is TV Guide (Fig. 4). In this piece, Ho hand-fabricated in silver a traditional Chinese altar table with a television set in the middle. During his travels to Asia in 1980, he stopped in Taiwan, where he visited a home where, he remembered, “they had, in the kitchen, this giant altar table, with all of these objects on it. And then, sitting next to it, at this time, was a gigantic black-and-white TV. . . . And I thought, ‘You know what? Those are the two things they worship the most in this house.’” The types of juxtapositions in this work—East meets West, found objects and hand-fabrication, modern-day and traditional—is what Ho’s jewelry came to represent. Professionally active for nearly fifty years and in receipt of numerous accolades throughout his career and right up to his death, Ho left an indelible mark on the field.

Narrative jewelry does not need to be an amalgamation of sources. The work of Joyce J. Scott proves that it can be all made of one material, utilize one technique, and still tell a powerful story with a loud and distinct voice. Scott often recounts stories from her childhood and of her ancestors, the crux of why she became an artist. From early childhood, art was a part of Scott’s upbringing. Her mother, Elizabeth Talford Scott, was “my first bead teacher and my first sewing teacher.” A celebrated quilt maker, she continued to be one of Scott’s mentors and confidants throughout her life. Scott, too, began her artistic career with quilt making and received a BFA in art education from the Maryland Institute College of Art in Baltimore in 1970. Throughout her life, she studied traditional weaving techniques of different cultures. Most prominently from the Native Americans she learned the peyote stitch, “a stitch that only employs needle, thread, and bead, that is improvisational,” which would have a profound effect on her work. Scott responded to the “immediacy” of that stitch. This method became her technique of choice in quilting and other mediums. It allowed her to revolutionize her craft and use it to address issues of inequality in race, gender, and class.

Scott, who received a MacArthur Foundation “genius grant” in 2016, is not ashamed of being political in her work. She once said: “I can’t be complacent about the world I live in. It’s important for me to use art in a manner that incites people to look and then carry something home—even if it’s subliminal—that might make a change in them.”Her beaded necklaces are  as relevant today as when she started making them some forty years ago. Her work has been described as being “at times extremely political and extremely direct, to the point of being shocking, but also extremely funny.”

Among the new generation of artists, Philadelphia-based Melanie Bilenker has captured patrons’ attention with her miniature self-portraits made out of her own hair. The use of human hair in jewelry can be traced to the seventeenth century and was a staple of jewelry making in the Victorian era, when the material was used to memorialize those loved and lost. As jeweler and writer Bruce Metcalf has written of Bilenker’s work: “The scenes she depicts would only be witnessed by the closest of relations: parents, siblings, or lovers. Who else gets to see us folding socks? The pure everyday-ness of Bilenker’s imagery reinforces the sense of intimacy already established by her use of hair and the small scale of jewelry.”  We can all identify with the scenes in Bilenker’s work. Her story is our story too, and because it is so relatable we forget that the person depicted is someone who is not us. Bilenker hopes that this is the outcome. “The reason that I rarely show my face or have it partly obscured is that my goal is to provide the feeling inherent in a moment or action without making it too much of a self-portrait. I hope the wearer or viewer will relate to the moment and that it will conjure the feeling of being in that scene themselves.”

In addition to bezel-set self-portraits, she has also been making viewfinders that feature more intimate scenes (Figs. 10a, 10b). The artist has a collection of plastic souvenir viewfinders that contain treasured photos of her family’s trips from when she was a child. “The images are casual family snapshots eating lunch or sitting by the pool . . . little tiny moments caught and preserved and set inside a small plastic box.” Bilenker’s process involves voyeurism as much as the finished work. She photographs herself completing the action and then draws it in hair—keeping a record of time spent.

Helen Williams Drutt, who showed both the work of Ho and Scott (as well as many other narrative jewelers) in her eponymous, groundbreaking Philadelphia art gallery, echoes Herman’s thoughts some twenty-five years later: “I was drawn to contemporary narrative jewelry because it incorporated all of the aesthetic and technical virtues of jewelry that we know but brings us into unknown realms that are normally associated with literature or social and political references. . . . One can wear a story!”

Bella Neyman is an independent curator and writer based in Brooklyn, New York, and the co-founder of New York City Jewelry Week, which takes places annually in November.