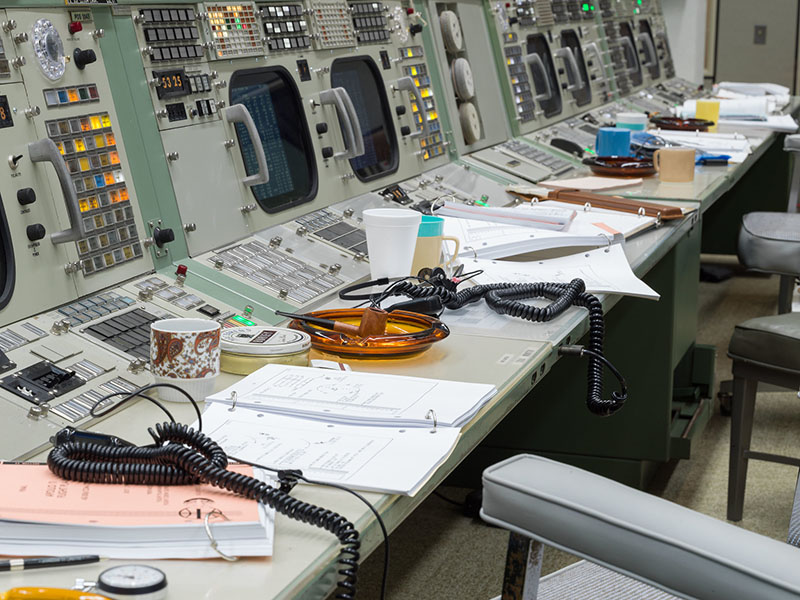 The last time mission control at the Johnson Space Center in Houston, Texas, was in operation was in 1992, when it directed a December flight of the space shuttle Discovery. After that, it went dark, literally. The glowing blue consoles were turned off and the furniture collected dust. By 2013, as Johnson Space Center historic preservation officer Sandra Tetley recalls, tour groups shuffling through the dingy space were greeted by masses of black and yellow safety tape, inauthentic or improperly-conserved chairs, and derelict work stations swept clean of the readouts, notebooks, ashtrays, and coffee mugs that had enlivened the center during its three-plus decades in service.

Six years and $5 million later the mission control center is back in all its midcentury glory, following a comprehensive restoration project. Relying on photos and material analysis, a project team led by Tetley, restoration project manager Jim Thornton, and former flight director Gene Kranz has re-envisioned mission control as it would have appeared in July 1969, when Apollo 11 completed its trip to the moon. Wallpapers have been reprinted, carpeting has been re-woven, and the paint is fresh. Animation looping on the console screens—their cathode ray tubes replaced with flat screens—and the big display boards replay key moments from the mission. The conservation team even interviewed former Apollo Mission Control team members about their working habits. Which buttons did they press? Did they smoke? What would have been at their desks? “They called [this] their cathedral,” says Tetley, “they were gung-ho [about restoration] from the get-go.”

While artifacts in museums across the country attest to the moon landings, to the people involved with mission control, this space is special. “It teaches the whole teamwork concept of the moon missions,” says Tetley, an important lesson at a time when NASA’s Artemis Program aims to return people to the moon by the mid-2020s. Work was completed just in time: the fiftieth anniversary of the moon landing, July 20, is right around the corner.