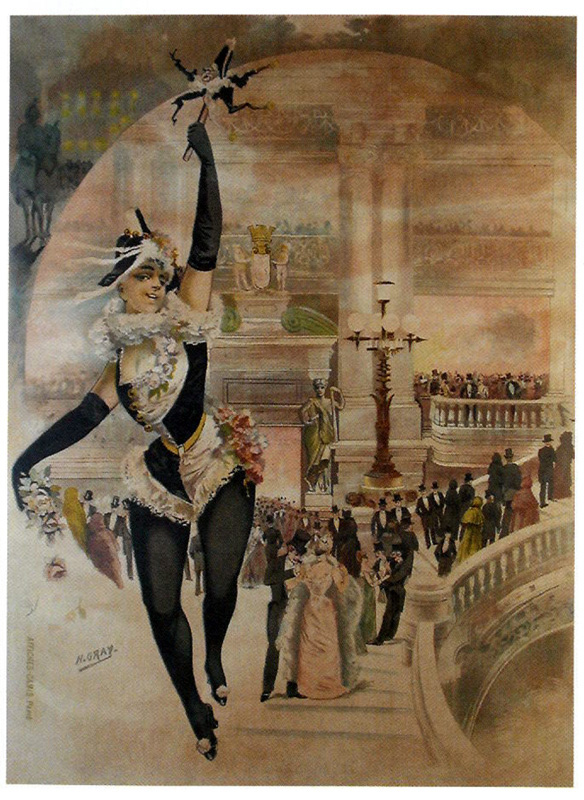 from The Magazine ANTIQUES, November 2011|

Poster art was born of two tech­nological developments: The first, lithography (meaning “stone printing”) was invented in 1798, a process in which an artist drew his design with a greasy crayon or oil-based ink directly on a specially pre­pared slab of fine-grained limestone. Based on the principle that oil and water repel one another, the stone was subsequently dampened with water, which was repelled by the greasy design and only absorbed by the blank areas. Conversely, when oily printing ink was applied to the stone, it adhered only to the greasy areas and not to the dampened blank ones. Lithographs were then printed on a lithography press.

The introduction of the second process, chromolithography, in 1827, laid the foundation for color printing, and thus led to the great flowering of poster art in the later nineteenth century. Multiple stones were used, one for each color, and the colors were often blended to produce a wide range of tones and shadings. Because lithographic stones were heavy and fragile, textured zinc and aluminum plates subsequently proved more practical.

The United States and Europe pro­duced an abundance of posters, but France quickly led the field, espe­cially in artist-designed posters. One of the most prolific French poster artists was Jules Chéret who produced over a thousand brilliantly designed posters advertising everything from circuses and popular novels to vermouth. Equally familiar are the sinuous art nouveau designs by the Czech-born painter Alphonse Mucha. Other art­ists like Edouard Manet and Henri de Toulouse-Lautrec designed posters as lucrative adjuncts to painting.

The San Francisco dealer Sarah Stocking notes that the 1890s witnessed a craze for poster collecting, or affichemania as the passion was called. Her online catalogue includes examples by most of the familiar names as well as lesser known artists from the late nineteenth century to the present day. Depending on the artist, design, date, rarity, and condition of the specific work, poster prices can range from a few hundred dollars to well over ten thousand.

The 1899 poster Théâtre de l’Opera, designed by Henri Boulanger (signing himself “H. Gray”), lithographed in color, and printed by Camis et Cie, exempli­fies French fin-de-siècle ebullience. The opulent Paris opera house became even more famous as the backdrop to Gaston Leroux’s 1909 novel Fantôme de l’Opéra. The Opéra was Paris’s social and musi­cal center, and the poster depicts an elegantly dressed crowd-masked for an opera ball-proceeding up the immense staircase. That this is an opera ball and not a regular performance is implied by the scantily attired party girl who dominates the foreground waving a jester’s wand. This example is in a proof state, without the titles or other lettering that would have been printed afterward.

Specified numbers of artist proofs were often printed before publication for the art­ists themselves as well as for collectors, and are usually marked “proof.” “Collectors should expect to pay more for ‘proofs before letters’ than for stock posters printed without let­tering,” Stocking says. “The expert eye knows how to spot the difference.” Measuring 49 by 36 inches, backed on linen, the poster is in good condition with well restored tears and repairs, and priced at $4,400.

Equally eye-catching in its sensual way is a poster extolling the attractions of France’s Bordeaux region (see p. 68). It was designed by the celebrated French painter, and Bordeaux native, Jean Théodore Dupas, a master of art deco style whose works included church murals, easel paintings, and decorations for the French liner Normandie. Here, using a strikingly limited color palette, Dupas creates an allegory of Bordeaux’s viticulture, architectural legacy, and historic maritime tradition, embraced by a goddess-like figure who suggests the region’s salubrious effects on its female population. Linen-backed, it is in nearly fine (A-) condition-a light fold detracting from a perfect A rat­ing. It measures 39 ½ by 24 ½ inches and is priced at $9,800.

The English poster also shown on page 70 advertised one of the most successful American musical comedies, A Trip to China Town. Written by Charles H. Hoyt and composer Percy Gaunt, it bowed at Hoyt’s Madison Square Theatre in 1891 and ran for nearly two years, a record then. Several songs became standards, includ­ing “The Bowery” (“I’ll never go there any more”), which later became a signature tune of NewYork governor and 1928 presi­dential candidate Alfred E. Smith.

The poster’s spare design was a conscious departure from the elaborate 1890s idiom by brothers-in-law James Pryde and Sir William Nicholson who used the pen name J. and W. Beggarstaff during their brief partnership, dissolved in 1900. Smaller, at 16 by 11 inches, than the normal large size, this version was one of several hun­dred reduced-size designs in the series “Maîtres de l’Affiche” (Poster masters) issued between 1895 and 1900. The series was published for subscribers in monthly portfolios of four designs, with a “free” special plate included once every quarter. All are high quality lithographs and as desirable today as they were at the time of publication. That they tend to command more affordable prices than the full-size original versions is exemplified by this one’s price tag of $425.00.

Condition, modern copies, and other considerations

Paper and inks are fragile mediums, sub­ject to folding, tearing, water damage, fading, and repairs. Therefore Stocking notes that, “to serious collectors condition always matters. The larger and rarer the poster, the more apt it is to have condition issues.” On the hunt, she says, “one always has to ask, ‘what are my chances of finding an example in bet­ter condition?’” With rare pieces, the chances are fewer, “but with more common ones, you should hold out for one in ‘A’ condition.”

Distinguishing between originals and modern copies is another challenge for collectors. Multicolor lithography required separate stones or lithographic plates for each color, and the inks were particularly rich in tone and saturation. “The excellent printing quality of that time cannot be easily reproduced with today’s presses,” Stocking says, “and is one way that helps to determine authenticity.” Collectors must train their eyes to recognize the char­acteristic visual qualities, texture, and color of authentic lithography vis-à-vis modern half-tone or computerized giclée printing. Size also matters, though outright fakes and counterfeits are usually printed close to the original size. Paper can offer its own clues, though once a poster has been linen backed you cannot always tell old paper from new. “See as many of the real thing as you can,” Stocking advises. “Visit gal­lery shows, museum exhibitions, pre-sale shows at reliable auction houses.”

Displaying and maintaining your collection

Whoever frames your antique posters should observe museum stan­dards of archival framing as detailed in the Library of Congress Preservation Guidelines for Matting and Framing.