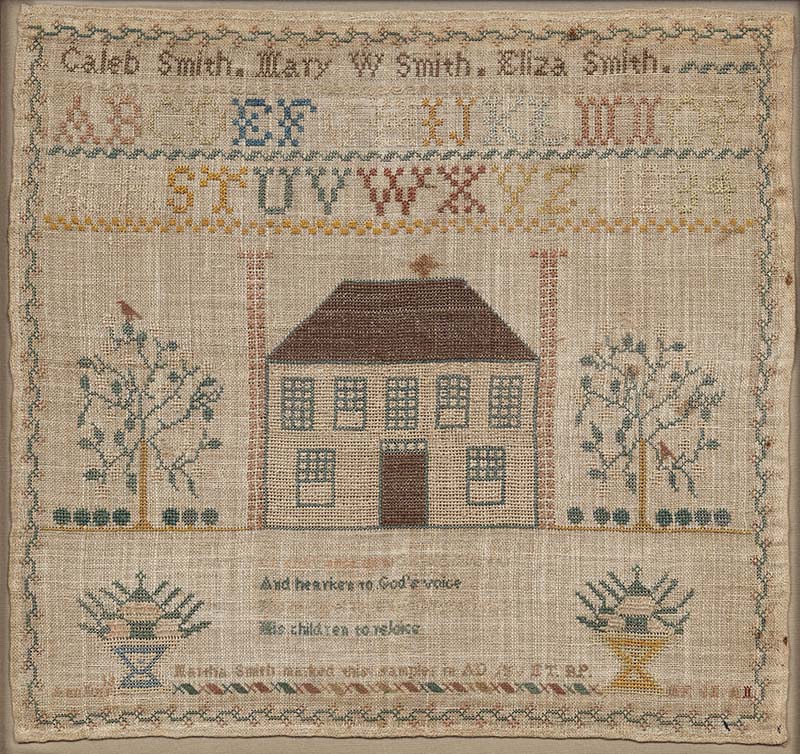 “Mahala Jameson marked this sampler under the direction of Mrs Hackley A D 1818.” This sentence, stitched along with the family names “Thomas Jameson Mary Herman Frederick Herman Samuel Ayrse Dolly Ayrse” is the only characteristic that distinguishes this nineteenth-century marking sampler—simple embroidery pieces on which girls honed their stitching skills—from any related samplers, and allows us to identify the teacher under whom the samplers were stitched.

The Museum of Early Southern Decorative Arts (MESDA) acquired Mahala’s sampler in 2014. The amount of information she stitched on it made identifying her fairly easy. Mahala Jameson was one of four daughters born to Thomas (1769–1805) and Mary Samuel Jameson in Orange County, Virginia. After Thomas Jameson’s death in 1805, Mahala’s mother married Frederick Herman. Samuel Ayres (Ayrse) and his wife Dolly Jameson Ayres (1768–1848) were Mahala’s paternal aunt and uncle. Of note to decorative arts scholars, Samuel Ayres was a silversmith working in Lexington, Kentucky, by 1790, one of the first to pursue his trade in that state. Perhaps Mahala included them because her own family was about to move from Virginia to Kentucky.1

By far the most intriguing part of this sampler was the inclusion of the teacher, Mrs. Hackley.2 Who was she? Ann Duncanson Hackley was the daughter of a successful Scottish merchant from Fredericksburg, Virginia.3 She married Edward Stubblefield Hackley in 1796 and they had four daughters.4 In April 1805 Ann placed her first advertisement in the Virginia Herald, stating, “Mrs. Hackley informs the inhabitants of Fredericksburg, that she wishes to undertake the management of a school.”5 Edward Hackley died that August, and by September Ann advertised the relocation of her school, noting “that a change in her situation renders it necessary for her to remove from Fredericksburg to Germanna.”6

Germanna was a logical choice for her new location. Ann’s sister Finella lived there with her husband, Charles Urquhart, who operated Germanna Mills, a store, and a tavern in Orange and Culpeper Counties.7 Judging by newspaper advertisements, it appears Ann successfully taught in Germanna for the next ten years.

In May 1816, tragedy visited Ann Hackley again with the death of Finella. That same month she advertised her “Greenwood Seminary for Young Ladies” for the first time.8 The advertisement gives us tantalizing clues to the location of the school—“near the Wilderness tavern” in Spotsylvania County, “lately the residence of Capt. Reuben Thornton, deceased.” It also mentions that Ann had leased the place for a number of years and that “the course of study will be the same as that pursued at Germanna.”

Ann Hackley continued to advertise her Greenwood Seminary in the Virginia Herald for the next four years, addressing the financial considerations of running a school—the raising of tuition, requests for payment due her, and the monetary consequences for early withdrawal, not so much the recruitment of students.

Three related Virginia Greenwood Seminary samplers have long been known, but the teacher and location of the school have proved elusive. First identified by Kim Ivey and published in her book In the Neatest Manner: The Making of the Virginia Sampler Tradition, these samplers are the earliest of what is known as the “Open Windows” group.9 Their similarities include houses with open windows, distinctive fruit trees with birds, and important family members’ names (including sometimes those deceased) stitched in succession at the top of the sampler.

One, acquired by MESDA in 2017, was worked by a member of the Terrill family from Orange County. The family member names stitched across the top— “William Terrill, Jane Terrill, George Morton, Jane M.”— are those of the parents of Reuben Terrill (1784–1829) and his wife Susannah Morton (1786–1854). It is unclear who stitched this sampler, but it was likely one of their three daughters, Elizabeth, Nancy, and Keturah, who were born between 1808 and 1815.

Mary W. Tomlin stitched “Greenwood Seminary” on her 1817 sampler, the earliest in the group, in the group and now in the collection of Colonial Williamsburg. The third sampler, in the Daughters of the American Revolution Museum in Washington, DC, was worked by Martha Smith and is dated 1824. While it does not name Greenwood Seminary, the design characteristics make for a clear attribution.

Mahala’s work and the Terrill, Tomlin, and Smith samplers feature the same alphabet sequence and lettering style. Mahala’s sampler also includes a family sequence similar to those on the Terrill, Tomlin, and Smith pieces, though on hers it is stitched at the bottom, not the top. While Mahala’s sampler does not include the decorative motifs depicted on the other examples—it is rather a straightforward marking sampler—it reminds us that elaborate pictorial samplers were part of a progression of work as young ladies advanced in their education.

The date of 1818 places Mahala Jameson’s sampler firmly within the documented time period of the Greenwood Seminary. While simple and relatively unadorned, it provided the important clues that established the connection between Mrs. Hackley, the Greenwood Seminary, and some Open Windows samplers.

JENNY GARWOOD is the manager of museum education and adjunct curator of textiles at MESDA.