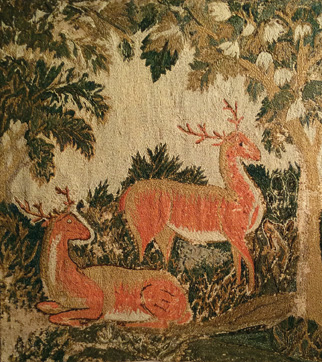 From The Magazine ANTIQUES, September/October 2015. |

Discoveries come in such unexpected ways. You can search for years for a missing piece of your puzzle without success. And then, sometimes, it falls in your lap! That is what happened last year when my friend Tom Jewett, of Jewett-Berdan Antiques, posted pictures of his Christmas decorations on Facebook.

Tom and Butch Berdan go all out for Christmas at their home in rural Maine, displaying antique decorations collected over the years. Last year they posted a picture of an embroidered panel depicting a deer that they had placed above a garland-bedecked mantel.

Although I had not seen it before it looked familiar. I asked them about its size and when they measured it as 25 ½ by 26 ½ inches, I knew I had stumbled on one of the missing panels of Mrs. Miner’s carpet. Even better, they had, they told me, a second panel, a floral bouquet.

In June of 1926 five panels of Mrs. Miner’s rug were published in The Magazine ANTIQUES. At that time it was recorded that she had made a patchwork rug sixteen feet square. In 1844 she had sent it to the New York State Fair for exhibition where, according to the magazine: “it was given a special display by itself. At the time it was described as showing a border, consisting entirely of bouquets of flowers, and a central series picturing groups of cattle, sheep with their shepherds, hunters on the trail of buffalo and moose, game birds, and what not else.”1

Mrs. Miner was born Eliza Gratia Campbell in Middlebury, Vermont, in 1805 and married Ebenezer Miner in 1829 in Canton, New York. She was about thirty years old when she started embroidering her rug. She is listed in the 1880 census as a widow with her occupation given as artist.2

At the time of the article in 1926, the carpet had been broken up and its parts distributed among members of the Miner family. The five blocks illustrated were owned by Fanny E. Wead but the whereabouts of the remaining panels were unknown. We have since learned that three blocks from Mrs. Miner’s carpet were shown in the “Woman’s Department of the American Exhibition now held at Boston” in 1883.3 And that one block was exhibited at the “Woman’s Exchange, Atlantic avenue” at an unknown date.4

While researching my book American Sewn Rugs 5 we located and included a sixth panel—a fine wool-embroidered image of two golden retrievers with trees in the foreground and a manor house in the background—in the collection of the Shelburne Museum. The stitching covers the entire surface and attention to detail is evident in both the dogsand the landscape. This panel had been donated to Shelburne in 1953 by Tilton Wead Rodgers, a great-granddaughter of Mrs. Miner. At that time the donor wrote: “I wish all the pieces of this carpet could be brought together, but know that would be impossible. Each of my cousins has a square or two, but I think others were given away and I remember cutting up one piece to cover a foot-stool many years ago.”6

At some point fifteen squares of the carpet were exhibited at the Folk Arts Center at 670 Fifth Avenue in New York City “through the courtesy” of Mrs. Miner’s granddaughter Mary De Forest Wead Weeks. In a difficult-to-see image of the squares displayed at that time, it appears that the Jewett-Berdan pieces were among them.7

There is some discrepancy in the number of blocks in the complete rug. The relative measurement of each block as two feet square in a rug measuring sixteen feet square, as noted in the 1926 ANTIQUES article, suggests a total of sixty-four panels. However, the Folk Arts Center exhibition paperwork states that there were twenty-four original blocks. Three of the fifteen blocks shown then appear to be among the five illustrated in 1926.

As Homer Eaton Keyes noted, “Mrs. Miner’s floral medallions are strongly suggestive of those with which hooked rugs have made us familiar. Indeed, the floral squares themselves, with their strongly marked centers and heavy borders, are definitely suggestive of the patterns of hooked rugs.”8

My hope is that more of these glorious panels will be uncovered. Wouldn’t that be something!

1 Homer Eaton Keyes, “A Note on Embroidered Carpets,” The Magazine antiques, June 1926, pp. 398-402. 2 I am grateful to Lynne Z. Bassett for sharing her research in the 1880 U.S. Census records. 3Clipping from unidentified Philadelphia newspaper, October 1883, acquisition papers, file 1953–1016, Shelburne Museum, Shelburne, Vermont. 4 Undated and unmarked news clipping, ibid. 5 Jan Whitlock with Tracy Jamar, American Sewn Rugs: Their History with Exceptional Examples (privately printed, 2012). 6 Acquisition papers, file 1953-1016, Shelburne Museum. 7 The papers in the Shelburne files related to the Folk Arts Center exhibition are undated, but since Mary De Forest Weeks died in 1945, the exhibition to which she lent the squares must have been before that year. 8 Keyes, “A Note on Embroidered Carpets,” p. 400.