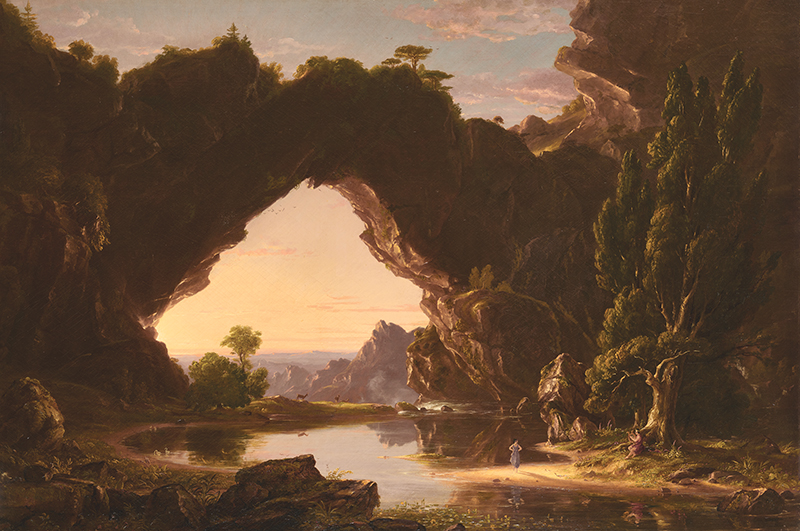 The Natural Bridge of Virginia is a 215-foottall geological formation located in the Shenandoah Valley that is the last remnant of the roof of an ancient cavern that collapsed millions of years ago. Its impressive height and unique features inspired generations of artists who visited the site, which for many eighteenth- and nineteenth-century artists was relatively remote. Yet, its craggy, foresttopped visage made a familiar and frequent appearance in painting, prints, photography, and the decorative arts of the era. As one of the earliest painters to depict the site, Joshua Shaw, remarked upon his visit to the Natural Bridge in 1820: “It is one of those scenes which it is impossible to contemplate without interest. Seen from a distance, and at first glance, it appears so regular as to resemble a work of art.”1

From its first depiction in the French travelogue of the Marquis de Chastellux of 1787 (Fig. 3) through the end of the nineteenth century, the Natural Bridge was one of the most culturally significant landscape features in North America. The mystery of its creation, its singular beauty, and the awe-inspiring height of its towering arch all provoked the simultaneous act of recording its topographic appearance and the furthering of its associations with myriad themes found in works of contemporary arts and letters. Linked in the public mind to both Thomas Jefferson and George Washington, the Natural Bridge became a part of mythmaking—the creation of an American foundational lore that continued throughout the nineteenth century. An exhibition at the Virginia Museum of Fine Arts, Virginia Arcadia: The Natural Bridge in American Art, brings together the foremost artistic depictions of this revered site and examines the multivalent meanings it held for artists working for more than a century, between the 1780s and 1900.

The first known painted appearance of the Natural Bridge is in an 1801 portrait of Thomas Jefferson (Fig. 1), who is dressed in a simple black field coat and hat. While Caleb Boyle likely never viewed either his sitter or the bridge in person—as models for each, he used images derived from prints—it is a remarkable pairing of an internationally renowned statesman and a natural landscape formation that was closely identified with him. Jefferson purchased the land on which the arch stands from the British crown in 1774 and owned it for the remainder of his life. He repeatedly encouraged artists, including Maria Cosway and John Trumbull, to come visit and take it up as an important subject. The Boyle portrait of Jefferson made its public debut at New York City’s Shakespeare Gallery in the spring of 1801, shortly after his inauguration as president.2 Rather than appearing as a metropolitan statesman, which Jefferson was of course, his simple dress and depiction in the Virginia wilderness offer a drastically different version of what a president looks like, in comparison with earlier, popular depictions of his Federalist predecessors.

Joshua Shaw’s two views of the Natural Bridge, one taken from the bank of Cedar Creek that passes beneath it (Fig. 4), and a second, extraordinary view that presents the vista from the top of the arch (Fig. 5), are among the earliest works derived from an artist’s own visit to the site. In the latter, Shaw paints a small figure dressed in a black field coat and hat who is cautiously crawling on his hands and knees toward the precipice. This detail is an allusion to a description of such an experience by Jefferson in his Notes on the State of Virginia:

Though the sides of this bridge are provided in some parts with a parapet of fixed rocks, yet few men have resolution to walk to them and look over into the abyss. You involuntarily fall on your hands and feet, creep to the parapet and peep over it. Looking down from this height about a minute, gave me a violent head ach [sic]. If the view from the top be painful and intolerable, that from below is delightful in an equal extreme. It is impossible for the emotions arising from the sublime, to be felt beyond what they are here: so beautiful an arch, so elevated, so light, and springing as it were up to heaven, the rapture of the spectator is really indescribable! 3

Shaw’s visual illustration of Jefferson’s own experience of the pleasures of beauty and the terrors of the sublime displays not only the artist’s awareness of his writing, but also of the intimate association between the locale and the former president. While Jefferson would not appear explicitly in later images of the bridge, his complex and contentious legacy was nonetheless present throughout the remainder of the century.

In 1825 the prominent Hartford, Connecticut, patron of the arts and amateur artist Daniel Wadsworth made a visit to the Natural Bridge. There he completed a small ink wash rendering that frames the bridge as a triumphal arch, a memorial to the persistence of nature (Fig. 7). This is a theme that likely would have appealed to Wadsworth, and also the young landscape painter Thomas Cole, whom Wadsworth would take under his wing only a few years after his visit to the Natural Bridge. Though Cole never explicitly painted the site, the appearance of some similar forms in his prolific output may indicate a casual consciousness of the bridge. Cole’s 1843 fanciful painting Evening in Arcady (Fig. 6) mimics the cragged arch of the Natural Bridge as depicted in a famous engraving, first published about 1832 (Fig. 9) and greatly popularized through a similar view by William Henry Bartlett included in Nathaniel Parker Willis’s American Scenery of 1840.

In the 1840s both Wadsworth and Cole would play important roles in the mentoring of the young artist Frederic Edwin Church. Many of Church’s most ambitious productions from the era reflected the two artists’ interest in imbuing the landscapes of their nation with important historical and moral relevance. This was a sentiment that Church maintained in June 1851, when he made several on-site sketches of the Natural Bridge. These sketches were then worked up into a finished oil painting that debuted at the Royal Academy in London the following spring (Fig. 2). The Natural Bridge, Virginia has recently received exceptional study as an early icon of the artist’s interest in the naturalist Alexander von Humboldt.4 Yet, the work also maintains a deep concern for the landscape’s historic context, and its association with Thomas Jefferson and the institution of slavery.

The Natural Bridge, Virginia includes two figures beneath the colossal limestone arch. Captured in mid-conversation, an African American man with an upraised arm, pointing toward the vault of the bridge, speaks to a seated white woman. The male figure has been identified as the artist’s reference to a famous caretaker of the bridge, Patrick Henry, a former slave who had purchased his freedom prior to Jefferson hiring him in 1817 to oversee his interests and offer tours to interested parties.5 Henry and his wife lived in a cabin near the edge of the bridge’s span, likely for the remainder of their lives. Henry outlived Jefferson, dying in 1831, twenty years before Church’s visit. Yet, Henry’s legacy lived on throughout the nineteenth century, though he was remembered not as a free man, husband, and caretaker, but allegedly as an enslaved individual brought from Jefferson’s plantation at Monticello.6

The outstretched arm of the male figure points toward the towering bridge, but more specifically to a split-rail fence that peeks through the brush at the left edge of the vault. The top of the bridge served then, as it does now, as an active roadway, which was a stretch of the Great Wagon Road that brought settlers from eastern Pennsylvania, through the Shenandoah Valley, and connected with the Wilderness Road that allowed for western migration. The site had been associated with western migration as early as the mid-eighteenth century, and an early view of the bridge by the Philadelphia printmaker Joseph Drayton included a Conestoga wagon at the same spot on the bridge toward which Church’s figure gestures (Fig. 12). On the reverse of one of Church’s sketches of the bridge, he outlined the familiar form of a Conestoga wagon that was still plying the roadway in 1851, and appeared in his painting New England Scenery of the same year. Church’s interest in the roadway of western migration may reflect his own emerging anti-slavery leanings and his frustrations with the expansion of slavery in the wake of the recent Compromise of 1850, which particularly invigorated the sale of enslaved people from Virginia to destinations in the Deep South and West. Though not unique in his conflation of the legacy of Jefferson with the site of the Natural Bridge, Church’s painting offers an unusually layered and subtle representation of the site’s most famous proprietors (Jefferson and Henry) and its relevance to contemporary American history.

While the 1850s was the pinnacle of the site’s popularity among artists and authors, the remainder of the century saw the site depicted in other mediums, including watercolor, pastel, and photography. It became a staple of the hugely popular trade of stereoscopy, first appearing in the pioneering work of the Langenheim Brothers (Fig. 11). Slowly, the reputation of the bridge shifted from a primordial emblem of the nation’s exceptionalism into a site of leisure and repose. Stereoviews, cabinet cards, and other associated forms of photography emphasized equally the grandeur of the site and its utility as a site of recreation. Throughout the twentieth century, it was noted as a frequent stop for automobile tourism and associated roadside attractions. With the establishment of a state park at the site in 2016, the Natural Bridge remains open for all and a significant site in American art history.

Virginia Arcadia: The Natural Bridge in American Art will be on view at the Virginia Museum of Fine Arts from February 6 to August 1, 2021.

6 For the life of Patrick and Louisa Henry, see David W. Coffey, “Thomas Jefferson, Patrick Henry, and the Natural Bridge of Virginia,” Proceedings of the Rockbridge Historical Society, vol. 12 (1995–2002), pp. 135–145; Henry’s alleged enslavement by Jefferson was repeated in nineteenth- century sources, including Description of the Natural Bridge, Va., and Its History (Packard, Butler, and Partridge, 1889), p. 7, and The Natural Bridge and its Environs (n.p., 1890), p. 5.

CHRISTOPHER C. OLIVER is assistant curator of American art at the Virginia Museum of Fine Arts.